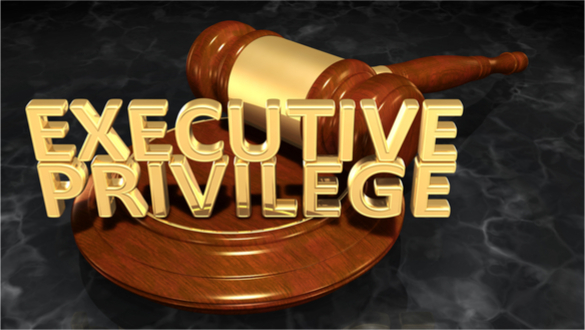 President Trump plans to prevent Congress and the American public to read large sections of any report issued by Special Prosecutor Mueller’s Report. Doing so will be a crucial error.

Disturbing indications that President Trump will use executive privilege to block portions of Special Counsel Robert Mueller’s final report from being shared with Congress and the American people; could end up in a battle before the Supreme Court.

Several news outlets are reporting Robert Mueller intends to release a report on his findings related to Russian interference in the 2016 U.S. presidential campaign to the Justice Department in mid-February. However, no law requires the report to be delivered for review by either the House of Representatives or Senate; causing concern that the report may never be released, never become public.

President Trump can block the release of the Russian probe report by asserting executive privilege to prevent key findings or the entire report from being released, according to people familiar with internal deliberations.

Under the federal regulation that authorizes special counsels, Mueller is required only to submit his report to department leaders. There’s no mandate that any part of Mueller’s findings is provided to Congress or the public.

What happens next would be decided by Acting Attorney General Matthew Whitaker or by William Barr, Trump’s nominee for attorney general, if he gets confirmed by the Senate.  In the past, both have criticized Mueller’s investigation into whether anyone around Trump colluded in the Russian meddling and whether the president sought to obstruct the probe.

Special counsel Mueller is required by law to deliver the report to the U.S. attorney general, which means President Trump and his lawyers will likely have an advance look at Mueller’s findings. This allows the White House to either sequester the report in whole or part by asserting executive privilege to withhold any information including wrongdoing on the part of President Trump and or his family, transition team and members of his administration.

Trump’s lawyer Rudy Giuliani has been quoted as saying recently …

“We will look at it and see if the president thinks there is a valid claim and if there is, do we want to make it,” said “We reserve the right. We don’t know if we have to, but we haven’t waived it.”

Thus making it clear that the White House is willing to fight in court to preserve and block material it considers privileged or even the entire report.

Executive privilege is the long-established doctrine that has been repeatedly used by some presidents who have argued that they must be able to keep internal deliberations private to protect their ability to get candid advice from aides.

Trump’s legal team has intentionally kept the option of using executive privilege say multiple sources familiar with White House deliberations despite the fact the Trump administration and campaign have voluntarily turned over tens of thousands of pages of records to Mueller’s investigators, without a subpoena fight with the special prosecutor.

Trump’s legal team believe they have successfully preserved the president’s option to assert an executive privilege that can be invoked later to protect the revelations in the Mueller report from being released outside of the executive branch. Had the special prosecutor been forced to subpoena the documents delivered to it from Trump and won, the President would have lost the ability to block their public release.

Trump’s legal team is relying on an assertion of executive privilege based on a 2008 opinion by Attorney General Michael Mukasey, under which information was withheld from Congress concerning the investigation into the leaking of CIA officer Valerie Plame’s identity. Also, the Trump White House and the legal team might even try to rely on President Barack Obama’s use of the privilege to prevent the release of documents related to the “Fast and Furious” gun-walking scandal that was rejected by a district judge.

The new Democratic chairman of the House Judiciary Committee, Democratic Jerrold Nadler of New York has predicted that any attempt by the Trump’s White House and lawyers “will not hold up in court.” Nadler insists that a claim of “executive privilege can always be pierced by a specific and legitimate criminal or congressional inquiry.”

Legal analysts including  John Dean, who was White House counsel to President Richard Nixon -- and became they key witness against Nixon during Congressional hearings into Watergate scandal has described this kind of use of executive privilege as “absurd” legal strategy for the White House to pursue in an effort to prevent the public release of the Mueller report.

Dean, however, has said it could be a successful “stalling tactic” that could “tie it up in the lower courts for a couple of years” preventing the facts from reaching the American people until after the 2020 election. Dean’s concern about a delayed release could be a legitimate concern given the tendency of the courts to be extremely careful about releasing any information that involves the release of intelligence sources, methods and legal requirements to withhold grand jury and other sensitive law enforcement information related to national security.

Robert Mueller could circumvent the blocking much of the report by having a grand jury make a presentment, which is a public report without indicting anyone with criminal charges.

Mueller could also use the nuclear option of ignoring the Justice Department’s standing policy that a president cannot be indicted while in office and continue with the indictment process. Trump’s personal lawyer Rudolph Giuliani has already revealed Trump’s legal team's plan B should Mueller’s report ultimately is made public and is damning for the president. They intend to release their report to counter any findings that paint Trump in a negative or criminal light, as they parrot the President’s frequent assertions that there was “no collusion” and no laws were broken.

All of this could lead to a long delay that extends past the 2020 election. However, lawmakers also have the option of short-circuiting both the delay and executive privilege claims calling the Special prosecutor and his lawyers to testify before Congress, where they would be pressed to disclose what they discovered according to John Dean, the former Nixon counsel…

“Trump can’t stop Mueller from going to Congress and talking about everything that’s in his report.”

This could create a situation where the public watches the President trying to prevent the public disclosure of the contents of the Russian probe report and then having the drama evolve into the release of content that ultimately implicates the President in a long list of federal crimes. That could ultimately be even more damaging than just releasing the report to the public when issued.