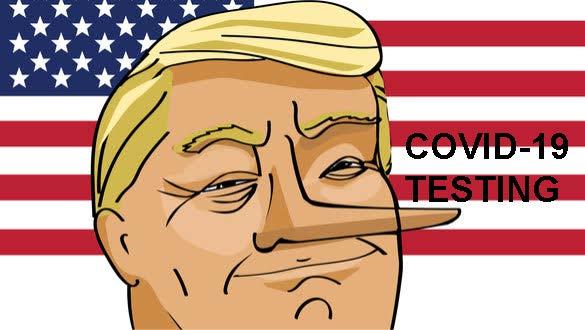 President Trump has lied to the American people again when he bragged that he had convinced health insurance companies to cover COVID-19 testing. Another step he has taken to slow testing for the coronavirus that can lead to deadly consequences.

The past two days polls for the 2020 presidential election show President Trump is trailing former Vice President Biden nationally by as much as 14 points.  Biden is gaining momentum in all the swing states, including running even in Ohio and Iowa. The country is turning against President Trump as the number of new coronavirus infections; continue to break new single-day records.

Trump and his administration have appeared to adopt the position that the pandemic is over and are focused entirely on reopening the U.S. economy. His fixation with defending and romanticizing the Confederate States of America and claiming protesters want to tear down statues and pictures of Jesus Christ isn’t helping him attract new voters and is depressing his poll numbers.

President Trump’s blatant lie told to the American people that all testing expenses they incur, and medical costs if they are infected would be covered by their health care providers has now changed into a lie that frees health insurers from the requirement of paying for COVID-19 tests.  This about face amounts to political insanity.

The Lincoln Project and other groups are turning out T.V. and social media ads literally in one day. Pounding the Trump honesty issue day after day could end up propelling Biden to as much as 20 point lead nationally.  Also, these commercials could cause the Republican Party to lose not only the White House, Senate, House Seat, Governorship's, and flip Legislators, but it could also lead to a 60 seat majority in the U.S. Senate.

Yet Trump continues this mad political strategy of allowing himself to be filmed lying to the American people over and over again.

The President has a vast media advantage beyond the help he received from Russia’s Vladimir Putin. All of his rallies were covered in full by FOX, CNN, and MSNBC in 2016. Now even FOX is airing his lies and chaotic revelations daily.

The combination of being pounded for lying, a growing list of scandals, and his administration’s disastrous pandemic response are creating the inertia to end his presidency in a wipeout for the GOP.

In 2018 the major issue that propelled the Democrats to regain control of the House of Representatives was health care.  Agreeing that Health Insurers don’t have to cover workers’ COVID-19 tests creates an opportunity for him and the Republicans in the Senate to get absolutely hammered again on healthcare.

Coronavirus tests will be free in the U.S., says Trump

President Trump is delusional to think by hampering and limiting testing for the coronavirus will reduce the number of reported cases and the number of deaths. The recent strings of infections of over 30,000 led the most significant one day increase yesterday in new infections; 38,386 have lifted the number fatalities yesterday in the United States to over 800 again.

A 60 seat majority in the Senate could induce Lisa Murkowski (R-AK) enough incentive to switch party affiliation, along with a handful of Republicans in the House of Representatives.  That kind of majority could lead to mass impeachments of the 200 Federal Judges ramrod through the Senate by Mitch McConnell. It could also lead to the impeachment of Supreme Court Justice Brett Kavanaugh, which would create a liberal majority.