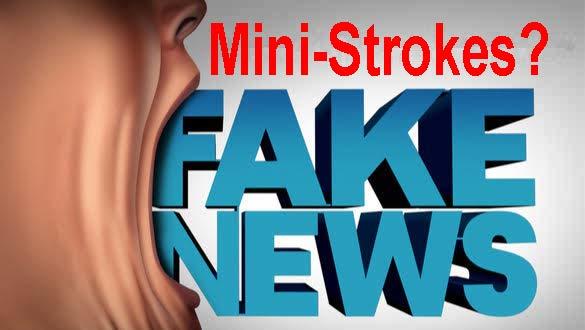 The evidence is mounting in the way Donald Trump walks, speaks, and in-memory gaffs that he when he took his late-night trip in August to Walter Reed Medical Centre it was because of mini-strokes.

We at Wall Street Rebel and many others have repeatedly questioned whether President Donald Trump has suffered a series of mini-strokes and whether his health is tenuous. To quote the comedian Redd Foxx from Sanford and Son, the “big one” could come at any minute.

Is Donald Trump Having Mini Strokes?

The President took off today on his trip to Kenosha, Wisconsin, despite repeated requests by state and local officials asking him not to come. The officials do not want to take manpower away from the police. The President fired off a tweet throwing more weight to the rumors of his poor health. 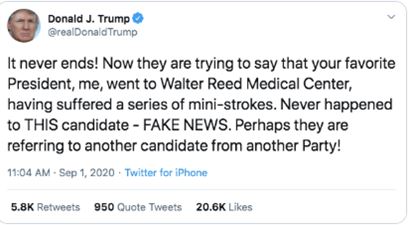 The previous Trump Tweet came out of nowhere. For that reason of an innocuous Tweet, Trump himself is bringing up the question if he had one or more strokes and stoking speculation. He has given new life to the rumors and belief by many that on two occasions, the first back on Saturday, November 16, 2019, and again on August 1, 2020, he suddenly took off to (AR2)Walter Read as the result of a serious health condition. 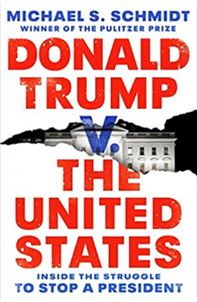 Many commentators in the media wondered openly what health issues Trump could be suffering from that would have prompted him to begin his “annual physical” so many months earlier. Even CNN physician Dr. Sanjay Gupta said of the sudden visit it didn’t “add up.”

“In the hours leading up to Trump’s trip (August 1, 2020) to the hospital, word went out in the West Wing for the vice president to be on standby to take over the powers of the presidency temporarily if Trump had to undergo a procedure that would have required him to be anesthetized.”

This passage in Schmidt’s contradicts President Trump’s repeated denials that he has suffered a ‘series of mini-strokes’ that sent him suddenly to Walter Reed hospital.

Today’s tweet by Trump ignited comments online concerning whether he has suffered a series of mini-strokes in the past 12 months. 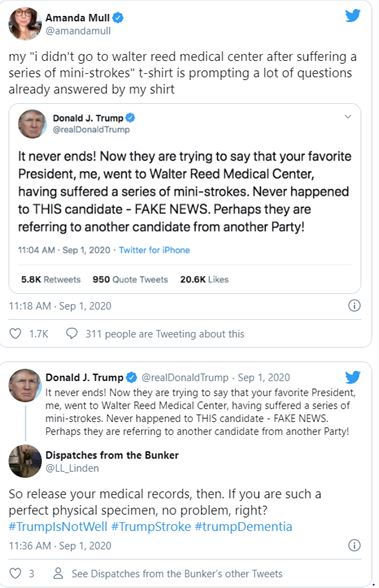 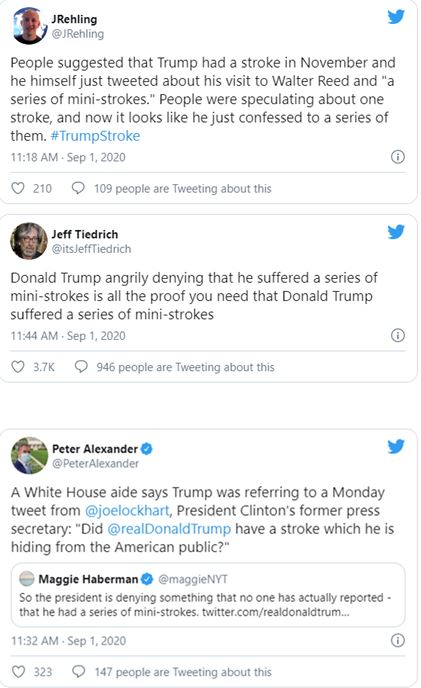 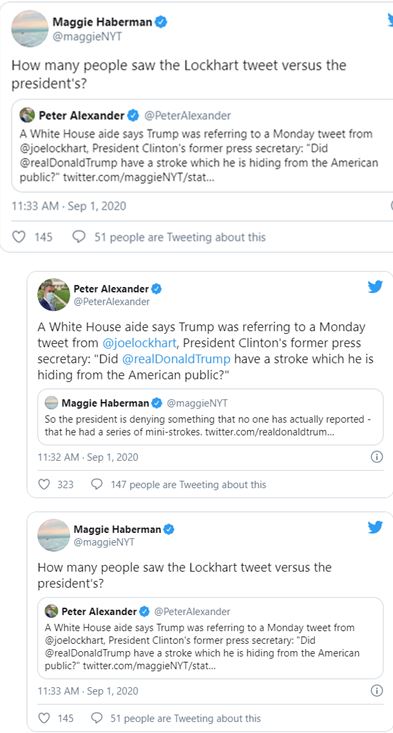 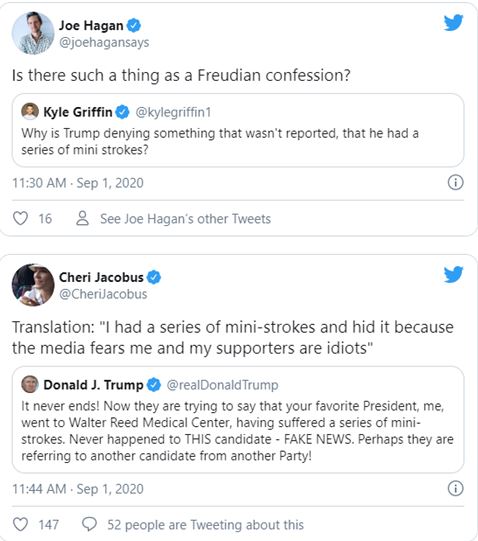 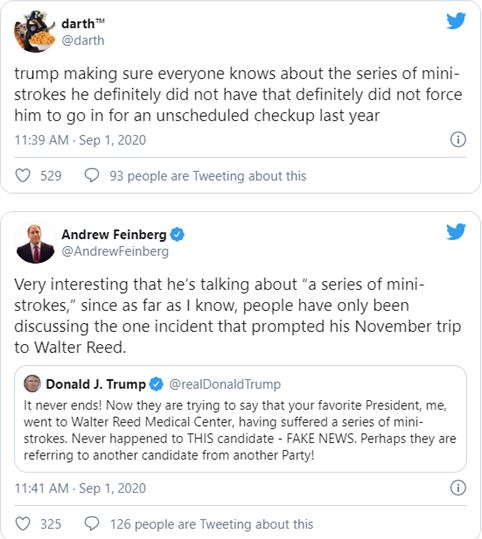 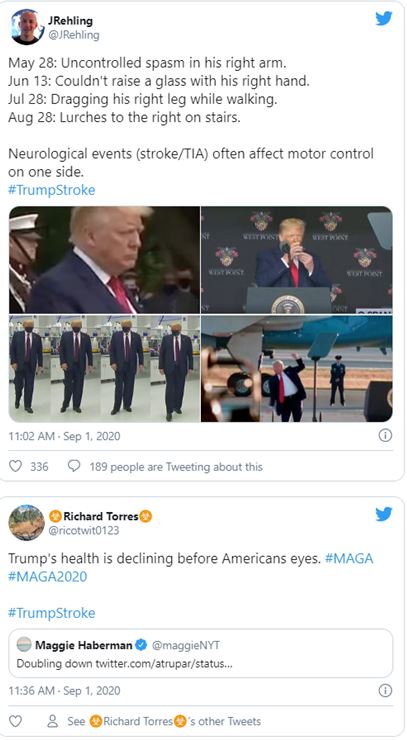 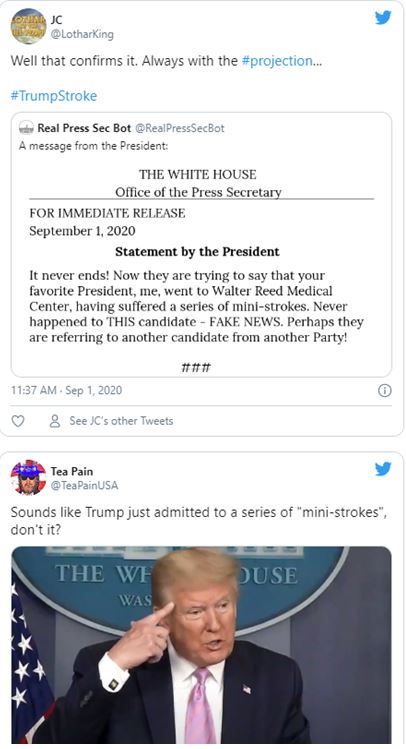 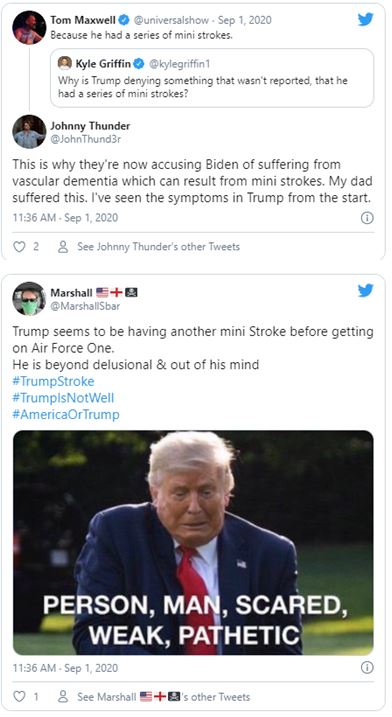 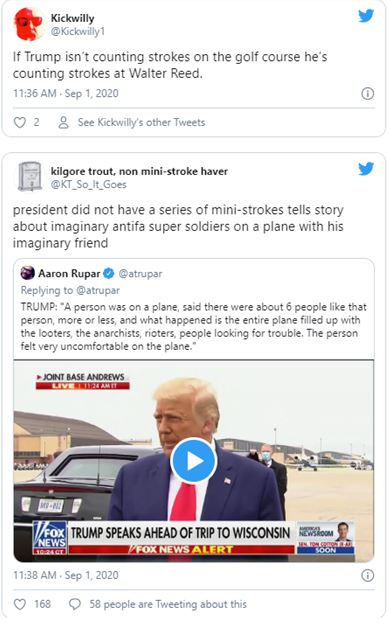