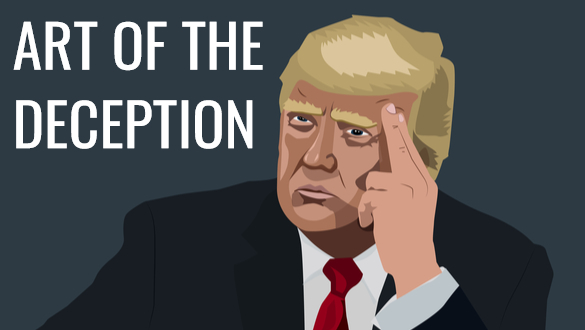 Trump has a notorious reputation for not paying his bills. Countless contractors, laborers and small business have been stiffed for tens of millions of dollars spurring hundreds of lawsuits over the past four decades.

El Paso played host to two political rallies on February 11, 2019. The first was held at the El Paso County Coliseum which was decorated by dozens of American flags and banners reading "Finish the Wall" displayed and placards’ in which during President Donald Trump hailed his "big, beautiful" border wall as the reason for El Paso's low crime rate, which was, of course, a proven lie. The crime rate rose after the border fencing was built almost two decades ago. Like every rally held by this corrupt president, the lies were many and the exaggerations made without any restraint.

Meanwhile, nearby a Trump MAGA pro-wall a march led by former Texas Congressman along the Rio Grande of thousands began, and culminated at the Chalio Acosta Sports Center where a counter-protest rally was hosted by Beto for America.

The rally celebrated El Paso's immigrant culture and condemned the bigotry and lies being displayed in the El Paso County Coliseum that night. It was unmistakenly an event to test the popularity of a prospective presidential candidate testing 2020 waters and set up what would become O'Rourke's official campaign kickoff a few weeks later.

Each rally generated bills for the hosts of the events. Beto For America owed the city $28,630.50 of which $7,609.14 was paid on deposit. The balance was due to May 24. Beto’s campaign paid their bill on time,  just under the wire,  with a check dated the day before the deadline.

Meanwhile, El Paso also billed Donald J. Trump for President Inc. for his "Make America Great Again" rally -- for $470,417.05. The invoice was sent to the campaign's Fifth Avenue offices in New York on March 27. It was due April 26, 2019. No surprise the man known for not paying his bills and his campaign has yet to pay.

The exact breakdown of the billing owed to six departments of the city of El Paso:

After the bill went unpaid by the Donald J. Trump for President, Inc., a warning letter was sent indicating a penalty would be imposed if the bill isn’t paid…

"Failure to pay your past due balance or to make acceptable payment arrangement within 30 days from the date of this notice (May 23) may result in your account being charged a one-time collection fee of 21 percent on your gross account receivable balance," the letter from El Paso's Office of the Comptroller states.”

Will the bill be every paid? Will President just ignore this bill like hundreds of others he had over the years? Conmen don’t pay their bills. Liars and cheats run from their bills. So given Trump’s history it most likely El Paso will be stiffed, and its citizens like those across Americans that are paying 25% tariffs on Chinese, and soon 25% on Mexican imports will soon be stuck with the bill while Trump comes up with a lie telling them a concocted lie to skirt his responsibility. Once a conman always a conman. 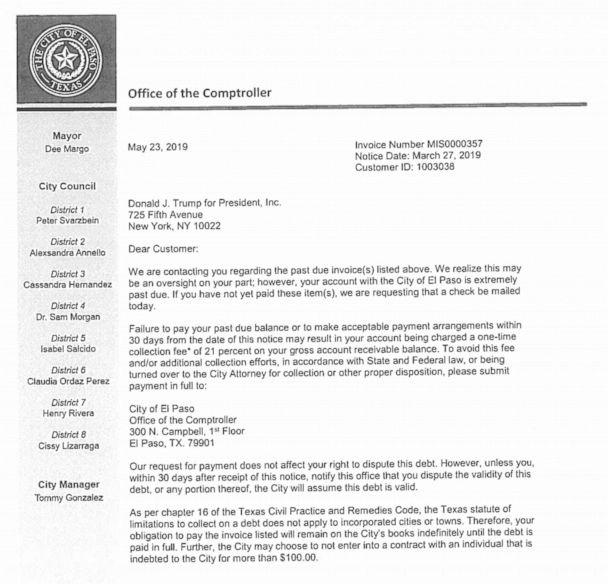 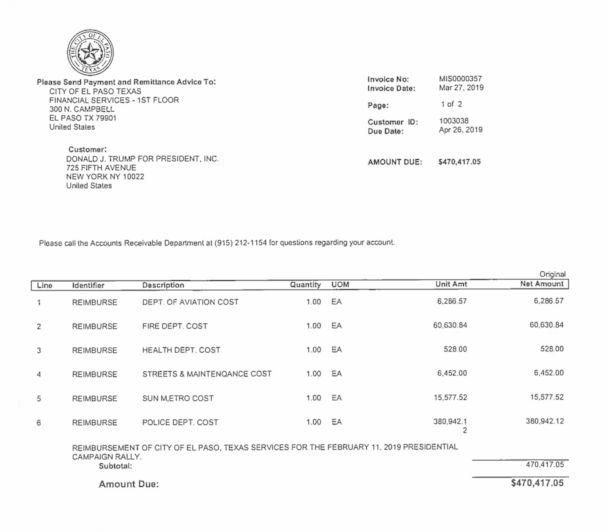