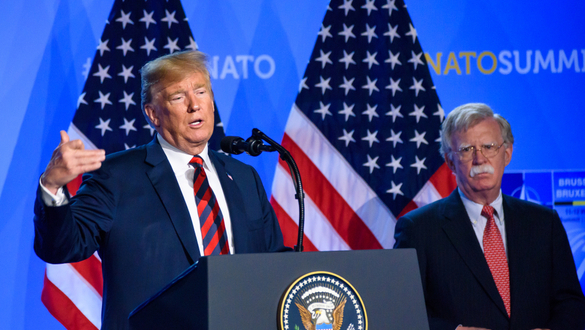 The question comes to whether John Bolton is more focused on promoting his eventual book or being a patriot and is willing to testify before Congress. We at Wall Street Rebel believe if President Trump resigns or is removed from office Wall Street, key indexes could jump 10% on a relief rally.

There’s one person who’s testimony is capable of either forcing President Trump to resign or capable of garnering the required 66 votes in the Senate to convict and remove him from office. It’s clear by all the testimony to this point that the one person capable of destroying President Trump’s defense is his former national security adviser John Bolton, it also leads to Trump’s defeat even if he holds on and runs for re-election.

"Most high-value target on the list by a long, long way’,"

Heilemann went on to say … "

"The more we learn about him (Bolton) and his role in this, where he was and what conversations he had, what he was privy to, what he witnessed, if he came forward and told the story—it might be enough to start to shift the tectonic plates,"

Republicans are resistant to even powerful pieces of evidence."

MSNBC Anchor Nicolle Wallace, who was anchoring the news report responded by making the claim…

"Look, I'm reluctant to say this out loud because I don't want to put anything in the water that could disincentivize John Bolton from testifying if that's what he wants to do…But I believe that John Bolton is the difference between conviction and no conviction in the Senate."

“A bunch of nobodies and dead-enders, and fourth-or fifth-tier people. Then John Bolton came in, and a few Republicans who had been a little nervous were like 'OK, he's part of the long stretch from Reagan through today of conservative foreign policy.'"

How would U.S. financial markets react if Trump resigned like Richard Nixon or was removed by conviction by the U.S. Senate? We believe Wall Street's major stock indexes could enjoy a relief rally of 10% in the days following either outcome.