Trump Desperate/Insane: Expects to be POTUS Again by August 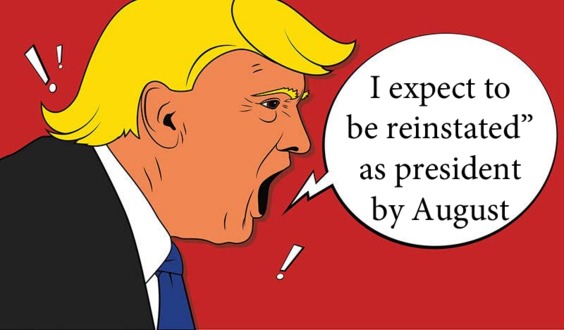 Donald Trump is under investigation by federal authorities in New York, Georgia, and Washington D.C. He is perhaps bolstering his case for acquittal of criminal insanity by telling anyone who will listen that he will be “reinstated” as president within the next two months.

Maggie Haberman of the New York Times is reporting…

“Trump has been telling a number of people he’s in contact with that former President Trump expects he will get reinstated by August” because the widely criticized “audit” he’s backing in Arizona will show he actually won the 2020 presidential election.”

“He is not putting out statements about the ‘audits’ in states just for the sake of it. He’s been laser-focused on them, according to several people who’ve spoken with him.”

Haberman is also reporting that the former president’s obsession with retaking the White House this year comes as he’s staring at the possibility of being indicted by the New York Attorney General’s Office, which is conducting a criminal probe of the Trump Organization for potential tax fraud. The reality of his business, him and his three oldest children being criminally indicted, maybe driving him so crazy that he has lost all touch with reality.

Despite 65 lawsuits filed by Trump attorneys and other supporters around the country, the attempt to overturn the results of the 2020 election didn’t overturn a single state’s electoral result.

Trump’s own Attorney General William Barr, a litany of Republican elected officials and state officeholders, have repeatedly said on camera there was no evidence that the 2020 presidential election was stolen, and Congress certified President Joe Biden as the winner in January. Even the January 6, 2021 insurrection by Trump-incited rioters did nothing to change that reality. 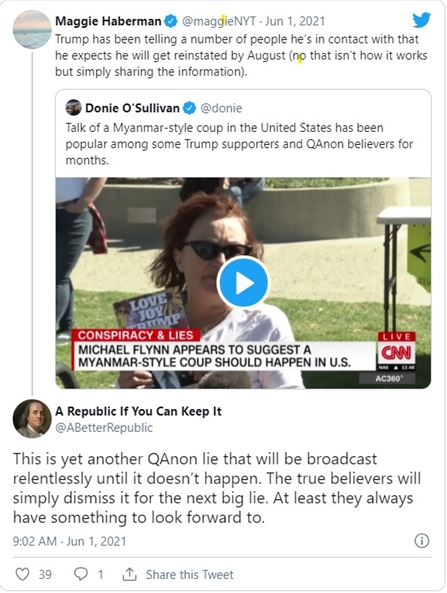 Now Trump supporters like his former national security advisor General Michael Flynn who was disgraced, indicted, and had to be pardoned by Trump, Sidney Powell, Michael James Lindell, Representatives Matt Gaetz, and Marjorie Greene are all suggesting that the U.S. Military or the American people should rise up and overthrow the duly legally elected government of the United States.

“Democracy is more than a form of government -- it is a way of being,”

“Democracy itself is in peril. Democracy must be defended at all costs,”

“Democracy, that’s the soul of America. And I believe it’s a soul worth fighting for. And so do you. A soul worth dying for.”

The danger of Trump whipping up violence using right-wing white nationalist zeolites’ like the proud boys and other far-right extremists militia should he, his three oldest children, and his business be criminally indicted grows with each passing day.

Trump is desperate and realizing that he may be on the verge of watching his finances and businesses collapse, his three oldest children, and he criminally indicted. He has to be wondering if he can still raise money and maintain his influence on republican voters as his legal woes become impossible to ignore. 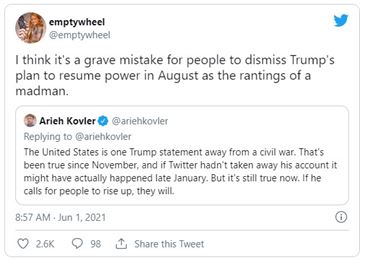