Trump Demands No Public Impeachment Hearings After Demanding Them for Weeks! 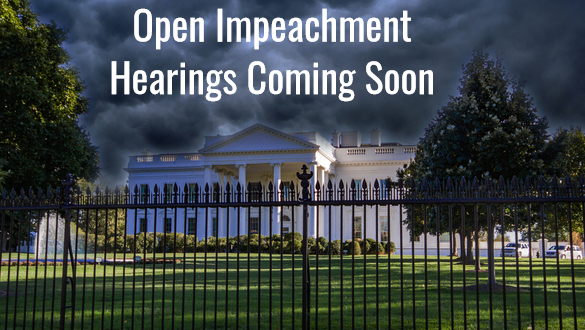 After almost four weeks of Trump and his GOP sycophants in Congress demanding that the House Impeachment Hearings be held publicly, the president now doesn’t want them to be public.

Trump told reporters during a 28-minute impromptu press conference this morning on the White House lawn before boarding Marine One that there shouldn’t any public impeachment hearings, calling them a “hoax.”

Trump was quoted as saying…

“They shouldn’t be having public hearings. This is a hoax. This is just like the Russia witch hunt. This is just a continuation. When you look at the lawyer for the whistle-blower, I thought it ended when they found out that the lawyer was so compromised. The lawyer is a bad guy. So you look at that. I thought that was the end of it. This is just a continuation of the hoax. It’s a disgraceful thing. In the meantime, we’ve got the best markets we’ve ever had, stock markets. We have the best unemployment numbers we’ve ever had. We have the best employment numbers we’ve ever had. We have almost 160 million people; we’ve never been even close to that. But unfortunately, you people don’t want to talk about that.”

Trump’s statement is a complete reversal of repeated demands that the impeachment inquiry not be conducted behind closed doors. The reversal makes his key supporters in the House and Senate look like idiots. GOP House Minority Whip Steve Scalise decries closed-door hearings and depositions of Soviet-style tactics. An absurd allegation when one considers the GOP did the same thing during the Benghazi and President Clinton’s impeachment investigations.

Trump’s insistence that the “transcript” of his controversial phone call with Volodimyr Zelensky on July 25 clears him of wrongdoing has met widespread rebuke because what President Trump released was marked as a ‘summary” and has been exposed as being altered by President Trump and or his staff.

Despite President Trump’s claim that the call was “perfecto,” the fact remains his own staff and lawyers were so terrified by the contents of the call they went to great lengths to hide (cover-up) the call.

President Trump’s former National Security Advisor John Bolton referred to the attempt to blackmail or bribe the Ukrainian President by holding back $419 million of desperately needed military hardware to defend against the ongoing Russian invasion as a “drug deal” a euphemism for an illegal covert operation.

President Trump’s trepidation about public impeachment hearings may be founded on his realizing he’s guilty of bribery and other crimes and that they will become clear to the American people to the point that polls now showing 49%-51% of the public are already in favor of his being both impeached by the House of Representatives and removed from office by the Senate.

House Democrats expect that as the public impeachment hearings expose President Trump, Vice President Pence, Secretary of State Pompeo, Attorney General William Barr, Trump’s lawyer Rudy Giuliani and others involved and who looked the other way at their violations of law and cover-up will motivate more witnesses to come forward.

One of the biggest bombshells that could explode in the public hearings that have been scheduled is the testimony of both former National Security Advisor John Bolton and that of Giuliani associate Lev Parnas who has been arrested. Lev Parnas could connect both to Giuliani and Russian Oligarch Dmitry Firtash with President Trump. Lev Parnas is furious that President Trump has disavowed any first has knowledge or recognition of him, since his arrest.