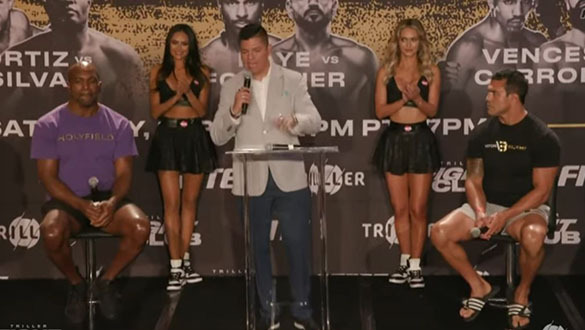 Former President Trump and his son Donald Jr. have agreed to serve as boxing commenators for four boxing exhibition matches, including former UFC champion Vitor Belfort and Evander Holyfield. Someone could really - get killed.

Has the management of the Hard Rock Casino in Miami lost their minds?

Oscar de la Hoya was supposed to headline the box card, originally supposed to take place in California. Still, de la Hoya dropped out after being hospitalized with COVID-19, and the fight night this Saturday has been moved to the Hard Rock Stadium in Miami.

Former President Trump is quoted as saying in a press release about the event to take place on Saturday, the 20th Anniversary of the September 11 attack on the United States…

"I love great fighters and great fights. I look forward to seeing both this Saturday night and sharing my thoughts ringside. You won't want to miss this special event."

The fight was moved to Miami from the original venue in California because of Holyfield's age. The California State Athletic Commission (CSAC) rightfully refused to approve the bout. Which raises the question, what happens if Holyfield gets killed?

The CSAC refusal to giving a license to a fighter who is approaching 60-years-old who has legitimate health concerns after decades in the ring has been widely deemed unethical by boxing aficionados.

Given the sluggish training session that has been popping up all over social media, there's a real chance that Holyfield could be seriously injured or killed by accident while the former president and his son are providing commentary.

As one observer pointed out…

" Holyfield appears dangerously old and slow in the ring as he prepares for a fighter who is nearly 15 years younger than him."

Keep in mind Holyfield is entering this match on incredibly short notice, thanks to Oscar De La Hoya's Covid hospitalization. The company behind this boxing exhibition is the Thriller Fight Club, who is selling the PPV event for $49.99 and has hired Donald Trump and his son to the sideshow as a commentator.

Please make no mistake about it both Trump and his son need money. They're being drowned in legal bills arising from the former president's time in office. But is the money they're making from this special event as it's being described worth the risk. Suppose Holyfield gets severely injured or dies as a result of this exhibition match. In that case, the additional damage to Trump's reputation could make it much harder to run for the Presidency in 2024.

The other three scheduled fights include Anderson Silva vs. Tito Ortiz, David Haye vs. Joe Fournier, and Andy Vences vs. Jono Carroll.

Is the Hard Rock Casino in Maimi, Florida, so desperate for entertainment that it is willing to risk a tragedy? If one takes place, the popular casino and hotel chain will carry the stigma of a reckless death for years. It doesn't seem to be a good bet unless they instruct the referee to step in and stop the fight at the first sign that the Holyfield, Belfort match is putting the former heavyweights' health in danger. 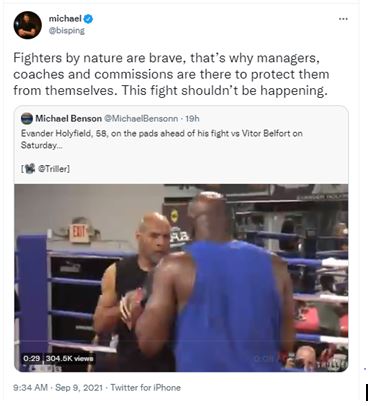