Trump Claims ‘Entire’ Airplanes ‘Filled Up with the Looters’ 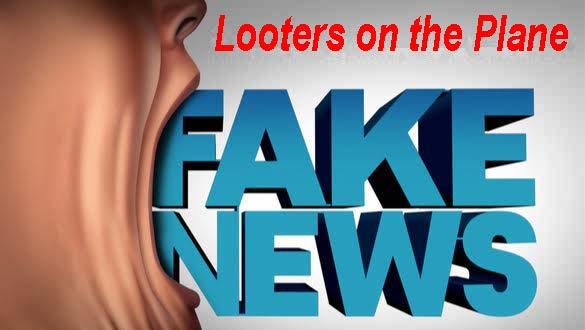 The newest conspiracy theory launched by Donald Trump came at the perfect time and place, on Fox’s News Laura Ingraham Show. One thing for sure is, if he hasn’t had a stroke, he’s latest conspiracy theory (Looters on the Plane) puts doubt that he actually passed the Montreal Cognitive Evaluation.

President Donald Trump attempted to explain his conspiracy theory that had an “entire” airplane “filled” with rioters and looters. This revelation came from an anonymous secret confidant who shared vital “fake news” with him exclusively.  By the way, this is Donald’s favorite way of leaking critical information to his base. Acquire a pure unadulterated conspiracy theory with no grounds and convert it into the most beautiful lie.

Another sign that Trump is lying is he double down on the lie. After first asserting the falsehood on Fox News, Laura Ingraham’s show, Trump doubled down on the claim while traveling to Kenosha, Wisconsin. The fabrication is much more believable the second time and third if you are lucky to be listening to Fox News.

According to Trump’s fabrication, he won’t name the person who gave him the “first-hand” account about a plane full of looters. Another thing Trump always does when he is lying. A tactic he has used for many years when he makes up a conspiracy theory that he believes will help him get what he wants or lend credibility to his insanity. Someone told me.  Who Mr. President…Someone! You know them… Someone!  Plausible deniability is this president’s best retreat tool.  His best asset is his limited recall of anything he says that creates controversy.  A favorite is, I never said that!

In truth, he has no respect for Republicans that eat this nonsense up. He knows they aren’t smart enough to see through his lying strategy.

Trump suggests there are 'entire' airplanes 'filled up with the looters'

“I can probably refer you to the person,” “And they could do it. I’d like to ask that person if it was OK. But a person was on a plane, said that there were about six people like that person more or less and what happened is the entire plane filled up with the looters, the anarchists, the rioters, people that obviously were looking for trouble.”

The president will promise indisputable evidence of an event or occurrence in just “two weeks,” but when it comes time to put his card on the table, that beautiful big brain of his becomes faulty and deceptive.

According to the president, “This was a first-hand account of a plane going from Washington to wherever. And I’ll see if I can get that information for you. Maybe they will speak to you; maybe they won’t.”

Regardless of how anyone traveling on a commercial jet can look at his or her fellow passengers and reliably discern whether they are criminals is insanity.  Perhaps the person looked at their fellow passengers and saw a group of people of color and assumed because he so many black and brown people that they could be nothing but criminals. This fits the psychology of President Trump, which is becoming increasingly pro-white nationalist and pro-Neo Nazi.

The move to the far right is out of desperation as the latest Morning Consult Polls this morning in the wake of the Republican National Committee are showing.  Trump is behind his Democrat challenger by 8 points nationally and trailing him in Arizona, Michigan, Colorado, and Wisconsin by 10 points or more.  That is also to trailing Biden in Minnesota, Pennsylvania, Georgia, Florida, and North Carolina.

Let's readdress the Montreal Cognitive Evaluation.  I am sure everyone would recognize an elephant on the plane. Would we really recognize a looter?