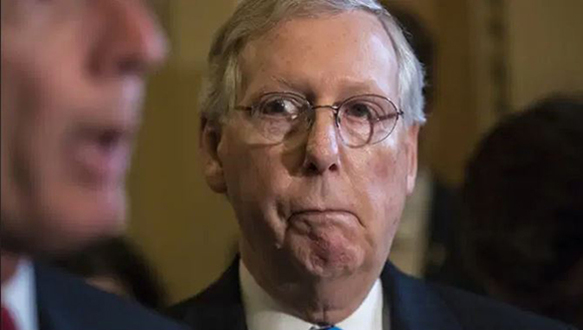 Trump sees every poitical downturn is just an opportunity to make money. The conman mastermind devised a plan to scam Trumpians and campaign benefactors to raise over $250 million since his November 2020 election loss and payback retribution to a political enemy. 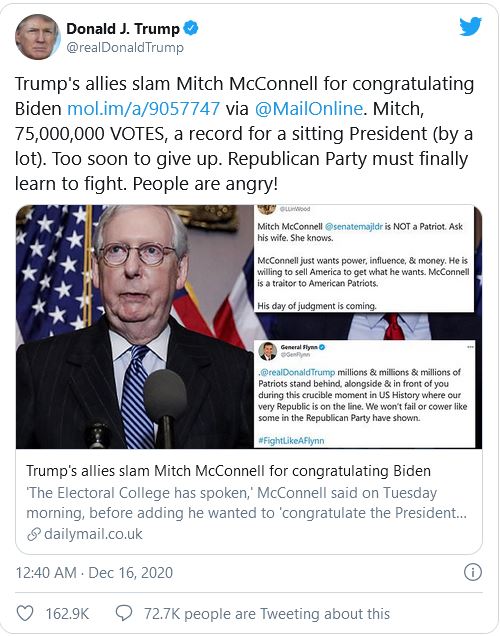 Out of pure spite, President Trump has canceled his upcoming campaign trips to Georgia. He is looking to punish Senate Majority Leader by ensuring he is demoted to a minority leader when the next Senate is sworn into office in January. This comes on top of his growing $250+ million and growing grift of raising funds for both his ploy to overturn the general election and to fund the Georgia Senate runoff races that amount to a complete scam as precious few dollars are reaching the senate campaigns for the G.O.P. incumbents hoping to retain their Georgia seats. The Times reported today…

“For Mr. Trump, the quarter-billion dollars he and the party raised over six weeks is enough to pay off all of his remaining campaign bills and to fund his fruitless legal challenges and still leave tens of millions of dollars.”

“Mr. Trump’s plans, however, remain extremely fluid. His refusal to accept Joseph R. Biden Jr.’s victory has stunted internal political planning, aides say, with some advisers in his shrinking circle of confidantes hesitant to even approach him about setting a course of action for 2021 and beyond.”

President Trump’s grip on reality is being undermined by his personal lawyer Rudy Giuliani, Peter Navarro, and other rabid pro dictatorship members of his administration that are urging him to declare martial law if needed to stay in power. The pressure, according to White House sources quoted by The New York is only to inflame his anger and impair his decision making process and mood, which the sources are warning could impact the two runoff elections in Georgia that will decide control of the U.S. Senate and dramatically increase President-elect Biden’s ability to ram through everything from nominations to a third emergency Covid-19 Bill, as well as a $2-$3 Trillion infrastructure bill and comprehensive immigration reform.

According to The New York Times and other news outlets…

“Those who have spoken with Mr. Trump say he appears shrunken, and over his job; this detachment is reflected in a Twitter feed that remains stubbornly more focused on unfounded allegations of fraud than on the death toll from the raging pandemic.”

“Mr. Trump had been tentatively planning to go to Georgia on Saturday, according to a senior Republican official, to support the two Republicans in Senate runoff races there. But he is still angry at the state’s Republican governor and secretary of state for accepting the election result and simply doesn’t want to make the trip. There is some discussion about him going after the Christmas holiday, but it’s not clear he will be in a more magnanimous mood by then.”

Trump’s growing lack of interest in Georgia’s Senate runoff races hasn’t stopped him from continuing his grift of raising big money off the upcoming determinative showdown. It’s just more money he can pocket via his new P.A.C.; little or none of that money will be sent to the incumbent Republicans campaigns…

“But even as he displays indifference toward the Georgia races, the Trump political apparatus has taken advantage of the grass-roots energy and excitement over the two runoffs to juice its own fund-raising. Email and text solicitations have pitched Trump supporters to give to a “Georgia Election Fund,” even though no funds go directly to either Republican senator on the ballot, irritating some Senate G.O.P. strategists,”

“Instead, the fine print shows 75 percent of the donations to the Georgia Fund go to Mr. Trump’s new P.A.C., called Save America, with 25 percent to the Republican National Committee.