Trump Campaign Has No Evidence of Wide Spread Voter Fraud 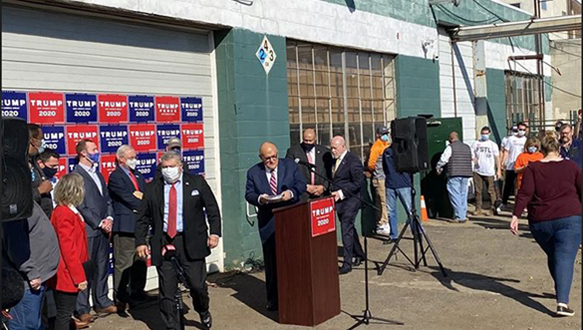 Rudy Giuliani’s Alleged Voter Fraud Press Conference at Philadelphia’s Other Four Seasons-Do You Mean I was to Book the Hotel?

The very people charged with finding voter fraud and who ran the United States for the past four years can't even find the Four Seasons Hotel in downtown Philadelphia. It may have been the sex shop and cematorium nearby that tipped off this was the wrong location.

Trump’s campaign lawyers have nothing to work with and were forced by the absence of evidence to try to introduce hearsay evidence written on a sticky note in court as evidence of voter fraud to a court.  The Trump attempt to overturn the election is nothing more than a fundraising scam!

In an attempt to keep President Donald Trump happy, his campaign is still doing everything it can to overturn this past Tuesday’s election result via the courts. It isn’t going well. So far, the Trump campaign’s lawyers have lost all five of the court cases it has filed.

The Washington Post has taken a deep dive into some of the Trump campaign’s failed efforts to get votes tossed out in several swing states. They discovered one particularly egregious and disastrous attempt in the state of Michigan, where the campaign’s presented evidence that amounted to a piece of hearsay evidence that had been scribbled onto a post-it note. Hearsay evidence, as most American’s know, is not admissible.

It was no surprise to legal experts watching when Judge Cynthia Diane Stephens of the Michigan 1st District Court of Appeals last week rejected the Trump campaign’s request for a Federal Court order to halt absentee counting ballots in Michigan based on hearsay from a GOP election observer.

“In that case, a Republican election observer said she’d been given a sticky note by an unnamed poll worker, alleging that late-arriving ballots were being counted improperly. But she couldn’t provide the poll worker’s name or any other proof.”

The Associated Press called President-Elect Joe Biden the winner of Michigan last Wednesday. At this point, Joe Biden has a lead of more than 125,000 votes, with more than 98% of ballots counted.

The absurd court filings are being supported by the vast amount of Republican lawmakers in Washington. This allows President Trump and his administration to delay the Biden/Harris transition team’s vital work and, as a result, is endangering our country’s national security.

The last time there was a delay in transition preparation was in 2000. It is widely believed this delay helped Al Qaeda and Osama Bin Laden pull off the September 11, 2001 attacks on New York City, Washington D.C and the failed attempt to strike CIA headquarters in Virginia.

Several political observers, including Keith Olbermann, think this entire effort to overturn the end result of the presidential election is a fundraising scam Trump can use to retire his campaign and Republican National Committee debts.