Trump, Brix, Fauci May Be Complicit in Murdering Children! 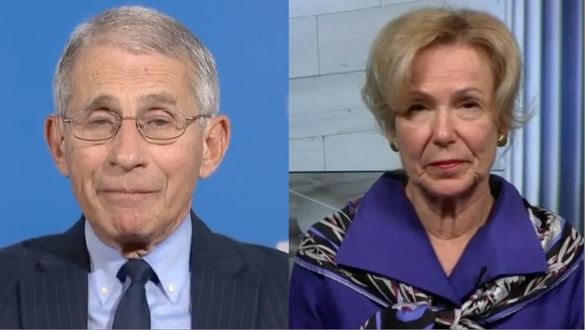 A Georgia sleep away camp that required masks for counselors, but not for the children attending was forced to close in just June six days after opening because more than 260 attendees contracted the coronavirus, according to the Centers for Disease Control.

Dr. Anthony Fauci and Dr. Deborah Birx have repeatedly credited President Trump for making good decisions as the COVID-19 virus has steadily escalated in danger. Dr. Birx we now know gave absolutely ludicrous predictions to the President that the epidemic here in the United States would disappear in March and April, that has cost over 160,000 American lives and will cost over 250,000 lives by November 3, 2020, Election Day and as many as 400,000 lives by the end of the year.

Both Dr. Fauci and Dr. Birx have rationalized they can do more good, staying involved with President Trump’s epidemic efforts than quitting in protest or saying something so egregious that Trump ends up firing them. Now they have no choice but to speak up; if they don’t, thousands, if not tens of thousands of children, are going to die of the SARS-CoV-2, along with tens of thousands of teachers and other school personnel.

Ann & Robert H. Lure Children’s Hospital in Chicago researches shows children have 100 times the viral infection in their nasal cavity than adults and older children. These findings contradict other findings that show children are infected at lower rates than elder children or adults and may be spreading the disease at a far higher rate.

This is confirmed by the news that out of 344 campers and staff in Georgia that were tested for the SARS-CoV-2 and resulted in 260 coming back positive in the weeks after the camp was forced to close, according to the CDC analysis, released on Friday.

The camp — identified as YMCA Camp High Harbour in North Georgia by local outlet WSB-TV — opened its doors to overnight campers on June 21, and by the end of the five days, realized that the camp had become a coronavirus hot spot and incubator.

While Children accounted for 168 of the 260 positive cases, and older counselors were more likely to contract the disease, the net result was the discovery that 74% of camp attendees who tested positive experienced symptoms, of fever, headache, and sore throat.

The outbreak occurred in just six days despite “multiple” precautionary measures adopted by camp officials, according to the CDC report. Still, while mask usage was universal among the adults, it was not required for campers. According to reports…

“The kids slept in relatively large cohorts in cabins with minimal air circulation, were “engaging in regular singing and cheering likely contributed to transmission.”

“SARS-CoV-2 spread efficiently in a youth-centric overnight setting, resulting in high attack rates among persons in all age group.”

Dr. Fauci and Dr. Birx MUST NOW risk being fired by President Trump or forever being branded as mass murders of children and school employees by allowing President Trump to continue to press for schools reopening physically in the next two weeks. They must speak out and stop schools from physically opening.

The evidence that has become clear from the Georgia summer camp and other Christian founded summer camps that have suffered coronavirus infections. They are saying they “regret” the decision to open Camp High Harbor, a tradition numerous generations of Y families look forward to every summer.

The one positive of all this…

CDC researchers now know that children of all ages one day to 19 years of age are susceptible to contracting SARS-CoV-19. Contrary to early reports, it might play an essential role in the transmission and that by opening schools by blackmailing states over funding for schools amounts to premeditated murder.  It’s time for Doctor’s Fauci and Birx to stop patronizing President Donald J. Trump’s stupidity. They must recognize that if they don’t absolutely bang the drums and publicly warn that reopening schools will result in thousands, tens of thousands even hundreds of thousands of  SARS-CoV-2 related deaths.

Even Baron Trump School isn’t opening to October and may be forced to delay its reopening for physical attendance till next year. No word on whether Donald Jr. or Eric Trump will allow their children will start attending school in August.

Bottom line: If President Trump forces schools to physically reopen, knowing that children and even young adults can be infected and suffer illness and death amount to premeditated murder. If Fauci and Birx don’t speak out, they should be indicted along with Trump and his sycophants as the deaths from the reopening schools rise in the number and become impossible to deny.

The silver lining is that if they force the opening of schools in just two weeks, the country will realize their crimes against humanity by the November 3rd election.