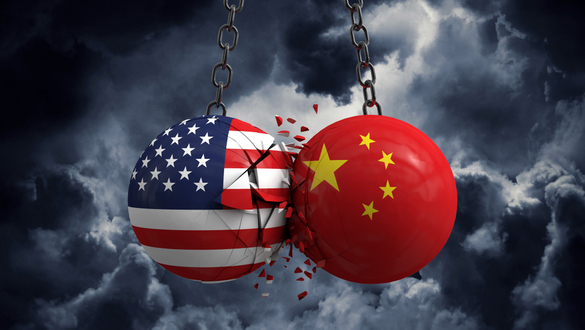 Trump did his best Ralph Kramden impression insisting he not only didn’t need a trade agreement with China before the 2020 election he went on to threaten to double the import taxes he calls tariffs if the Chinese didn’t bend to his will.

The last time U.S. and Chinese trade negotiators were going to have a serious negotiation the presidents first tear trade negotiators were in the air heading to Shanghai when President Trump released an insulting Tweet tirade. Trump’s trade delegation was politely received after landing in Shanghai treated to dinner and a museum tour and then informed that negotiations would resume in September.

President Trump’s Twitter attack designed to bully the Chinese during the resumption of trade talks in Shanghai killed the negotiations in August. It was the Chinese way of giving Trump the middle finger in response to his bullying.

It just happened this past Friday again. President Donald Trump said Friday he really doesn’t need a trade pact until after the 2020 presidential election and could easily double the import taxes he calls “tariffs.”

It was another absurd attempt to bully the Chinese negotiators, that resulted in their canceling both the two days of talks planned and tour farms this week in Montana and Nebraska where China’s retaliatory import taxes (“tariffs”) and intentional boycott of purchases on soybeans and pork have hurt farmers.

Trump at every opportunity continues to sabotage negotiations for a trade deal with China. Every time he does this, he cites that American economy is “so strong” that he doesn’t have to make a deal…

On Friday he was quoted as saying …

“I’m not looking for a partial deal; I’m looking for a complete deal,” he said. “People know that we’re doing a great job. ... We’re not being affected.”

On a day he let it be known during an Oval Office visit with Australian Prime Minister Scott Morrison, Trump also insisted again that China pays the import taxes aka “tariffs” imposed by the Trump administration on Chinese goods imported into the U.S….

“Hundreds of billions of dollars’ worth of money is coming in from China that never came in before.”

The fact remains these important taxes he calls “tariffs” are paid by companies, like Walmart, Amazon, Target that import Chinese products, and these important taxes are being passed on to the American consumer. Also, U.S. farm bankruptcies are higher now than they were during the 2008-2000 financial crises. Many Florida, Georgia farmers have still not collected emergency funds from Hurricane Maria two years ago. The checks paid to farmers in the mid-west from Trump’s “tariffs” have not helped and those loyal farmers are losing money and facing an economic crisis.

The U.S. trade representative’s office issued a statement characterizing the two days of talks as “productive” and said higher-level talks will take place as planned next month. However, reports leaking from the talks indicate the negotiations accomplished absolutely nothing.

In a bid to smooth some kind of deal with China, Trump had delayed increasing tariffs on $250 billion worth of Chinese goods from Oct. 1 to Oct. 15 as a “gesture of goodwill.” Trump also lifted tariffs on hundreds of Chinese product categories from his “tariff list,” including Christmas tree lights, at the request of U.S. businesses according to Reuters reporting.

Two weeks ago, China initiated the goodwill by announcing it would exclude imports of U.S. soybeans, pork, and other farm goods from additional tariffs. However, that doesn’t mean they agreed to start buying again from American farmers. Given the sudden Chinese decision to leave the United States without stopping as planned in Nebraska and Montana, we may see the Chinese hold back from negotiations through President Trump’s October 15th deadline to see if he is stupid enough to actually impose those delayed import taxes and even double the existing ones.

On Friday with the Australian Prime Minister sitting next to him deranged Donald Trump asserted he could end Afghanistan war quickly but ‘tens of millions’ of people would die. A country of about 37 million people — was among the issues that the two men discussed in their meeting at the White House…

“We’ve been very effective in Afghanistan, and if we wanted to do a certain method of war, we would win that very quickly, but many, many, really, tens of millions of people would be killed, and we think it’s unnecessary,”

President Trump has made similar deranged threats. Back in July during an Oval Office meeting with Pakistani Prime Minister Imran Khan. Trump claimed he could win the war “in a week” but said he did not want to go that route, because “I just don’t want to kill 10 million people.”

Trump is believed by many, including the husband of his presidential advisor Kelly Anne Conway as being deranged and mentally ill. Many Washington insiders witnessing his increasingly deranged behavior are worried he could wake up in the middle of the night and order a nuclear strike on Afghanistan or Iran.