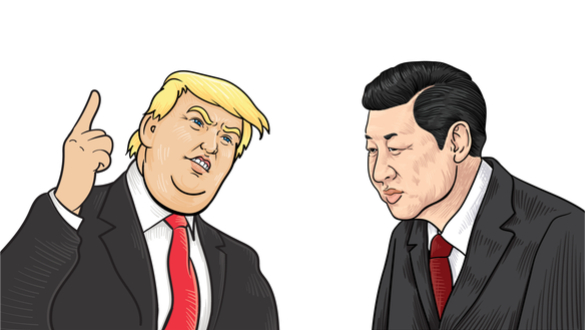 National Economic Council Director, Larry Kudlow – President Trump’s top economic adviser – told the Financial Times in an interview published a few days ago that China is refusing to engage in negotiations on trade issues and believes it will take more time for U.S. tariffs to force them to the negotiating table.

"We gave them a detailed list of asks, regarding technology for example, [which] basically hasn’t changed for five or six months. The problem with the story is that they don’t respond. Nothing, Nada.”

"It’s really the president and the Chinese Communist party, they have to make a decision, and so far they have not, or they have made a decision not to do anything, nothing. I’ve never seen anything like it."

President Trump also believes that it is going to take more time for tariffs imposed on the U.S. on Chinese imports to have the kind of impact on China’s economy that will give his administration more time to gain the needed leverage to win a new trade agreement that serves U.S. interests.

Meanwhile, trade talks collapsed in late September when the United States and then China imposed new tariffs on each other’s imports.

President Trump and Chinese President Xi Jinping appear to be set to meet alone at the G20 summit of global leaders in Argentina next month.

The trade tensions and concerns about an economic slowdown weigh heavily on Chinese stocks as economic reports are signaling growth is decelerating to 6.5 percent in the third quarter, according to data published last week by the Chinese National Bureau of Statistics.

In May, U.S. and Chinese negotiators presented long lists of demands during their trade talks in Beijing. Among U.S. demands were…

·        A reduction in the country’s trade deficit with China

·        Abandonment of subsidies and government support to Chinese industries pledged in its China 2025 industrial policy program.

China’s demands, on the other hand, included…

The United States is ending its ban on exports to China of integrated circuits, opening government procurement to Chinese technology products and services, and giving Chinese companies equal treatment in national security reviews.

Gao Feng, a spokesman for China’s Ministry of Commerce, told reporters during last week’s press briefing… on October 18 that the U.S. needs to show sincerity if it wishes to resume talks. Feng’s boss, Commerce Minister Zhong Shan, told Bloomberg China isn’t going to back down in the face of higher U.S. tariffs on Chinese products, adding that "China doesn’t want a trade war, but would rise to it should it break out."

We at WallStreetRebel.com have been pointing out since this trade war with China began that President Trump, Larry Kudlow, and rest of the Trump Administration may not understand the cultural resistance to essentially being forced to surrender to economic blackmail they’re using to wage this trade war with China. XI will not allow himself or China to “lose face” with an economic knife at his throat. The biggest dangers of this conflict are many, but the worst danger is the emergence of a new deadly cold war between the two countries.