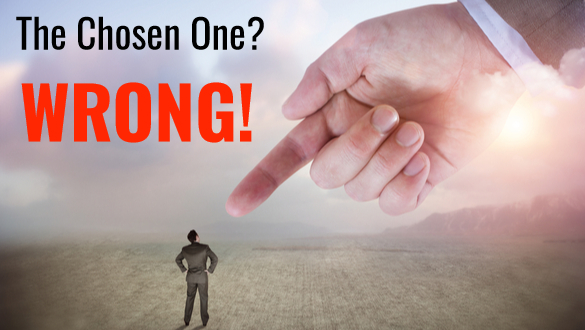 If there was any doubt that ‘The Chosen One’ is insane after his latest series of answers to the Press all doubts have been dispelled. The President is completely ignorant of history, religion, and delusional.

Conservative far rightwing NewsMax TV personality Wayne Allyn Root may be a bigger moron than President Trump, but that didn’t stop him taking a Tweet from the man seriously and keep him from buying into manure he was peddling. Here’s the Tweet…

‘President Trump is the greatest president for Jews and for Israel in the history of the world, not just America... and the Jewish people in Israel love him like he’s the King of Israel. They love him like he is the second coming of God’

I’m sorry to inform Mr. Root that since the Jews don’t believe Jesus,  was the promised Messiah still set a plate for the Messiah at Passover for his arrival. The first coming hasn’t happened, and both faithful Christians and Jews should equally agree that referring to Donald J. Trump as the second coming of God as pure and total blasphemy!

The fact that during its actual writing of his book famous book, Trump was piling up unpaid debtors like cords of wood, and bankruptcies, didn’t stop his delusions of greatness.

You’d think evangelists would be coming out in droves screaming blasphemy that anyone would refer to Deranged Donald as he is referred to by Conservative George Conway, Kelley Anne Conway’s husband, but they aren’t. The promised second coming of the son of God, Jesus is predicted to occur in the final days of mankind. Perhaps so many evangelists believe we are living in the final days, they are willing to believe President Trump is the second coming.

I and 10+ million Jews around the world, perhaps half billion of other thinking knowledgeable people who have read the new testament read Wayne Allyn Root’s bullshit as a clear signal that Donald J. Trump is the false Messiah, the anti-Christ the new testament warns. A man who is a racist, adulterer, tax evader, rapist, compulsive liar, thief, and child abuser certainly fills the description of a false savior. A man that is allowing nuclear treaties pass by the way-side flouts international refugee treaties, allows reporters to be slaughtered, attacks the free press daily and insists on being worshiped certainly appears to be a potential anti-Christ.

Trump now resembles the infamous Roman Emperor Caligula, who decided that he was a god on earth, and declared himself, to be Neptune. Caligula claimed to talk with gods regularly on a personal level. Trump pretends to have spoken with many people that agree with him but have been proven to be fictitious.

Many people will argue that like Caligula Trump doesn’t believe he’s a god and is just trying to convince people of it as a political strategy.

I, for one, think Trump is as dangerous as the predicted anti-Christ. His grip on reality is such I expect him any day to declare a deity day in which he has a group of evangelist preachers crown him has the second coming of God. That will be the day Democrats and Independents will be declared traitors and Trump will raise a white supremacist army to order our round up humanely.

Trump seems to have lost all sense of reality the day he discovered a large amount of his financial information was passed along to Congress and New York law enforcement. The evidence will prove he overvalued properties on applications for loans and unvalued the same properties when filing taxes.

These newly released documents will give a bread crumb trail to a great number of felonies. They will become public and will lead to his impeachment during his re-election. His declaring himself a god and burning our democracy to the ground may be the only way of spending the rest of his life in a private prison for one, on an army base. It would be the only reasonable incarceration for a former President of the United States. The two other alternatives, the man who would be a god defects to Russia and lives out his days condemning the traitors that turned on him. The other alternative is he wakes up in the middle of the night like the character Greg Stillson in Stephen King’s Dead Zone a horror/supernatural thriller novel by published in 1979 and fulfills his destiny of being the anti-Christ who burns the world to a cinder in a nuclear war before he can be stopped.