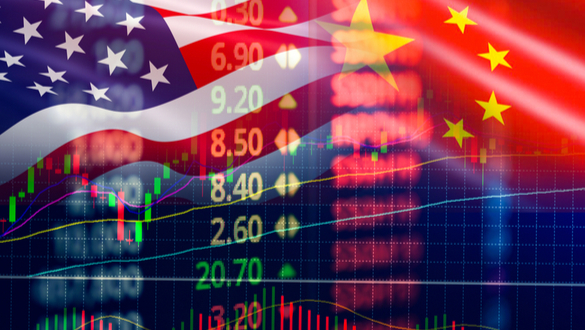 Donald J. Trump has bragged for years that he is among the best negotiators in history. After a three-month break, off in negotiations because of his inability to keep himself from continuously attacking the Chinese, his strategy of resuming negotiation with the Chinese was to lash out at them for continuing to “rip off” the United States.

President Trump is livid again. He says China continues to boycott American agricultural products and is continuing to “rip off” the United States yesterday twittering …

“China is doing very badly, the worst year in 27 -- was supposed to start buying our agricultural product now -- no signs that they are doing so. That is the problem with China. They just don’t come through.”

Despite Trump’s claims that the United States has the upper hand collecting billions in tariffs that are being paid by the Chinese, and they are “desperate” for a deal, the Chinese remain stoic.

Perhaps the Chinese understand Trump’s tariffs are imported taxes being imposed and are being paid for by U.S. small and large business. These tariffs are costing American consumers as much as $800 a year. Perhaps the Chinese realize that the U.S. general election is only 15 months away and recognize Trump’s election in 2016 took place on the strength of just 77,000 votes in four U.S. states and a weaker than expected African American turnout.

The less the Chinese buy in the short-term, the more likely that the price of soybeans and cotton will continue to move lower, which in the long-term will favor China’s negotiating strategy to continue the holdout.  Also, the less the Chinese import, the slower the U.S. economy will grow.

The Chinese seem to be ignoring Trump’s insistence and threats that the U.S. has “all the cards.”  Trump is used to using intimidation and is warning China if he’s reelected in 2020 that China will face a much tougher deal.

Instead of charm and diplomacy, President Trump chooses to insult the Chinese insisting, they always change the deal in the end to their benefit.” Trump is daring China, them saying “they are taking his advice that they should probably wait out our election to see if we get one of the Democrat stiffs like Sleepy Joe" will get elected and give them a much better deal.

Trump is a racist and acts out his racist tendencies every time he addresses the Chinese culture structured around honor and respect. Every time he attacks China, he fortifies the support of the Chinese people behind President Xi.

Trump has created a war with the Chinese who are no longer rushing to the United States as tourists, no longer buying lobsters from Maine, King Crab from Alaska and letting U.S. soybeans sit in storage. China's imports of U.S. soybeans dropped to the lowest since at least 2004

President Trump will discover when the Federal Reserve lowers interest rates this week, in large part because of the global trade war and slowing economic growth and business investment. While the move lowers the value of the U.S dollar, it may take just a few hours before China, and other countries currencies move lower wiping out any advantage Trump hoped for from lower interest rates.

Mnuchin, Lighthizer and the rest of the Trump brigade are set to attend a dinner at the Fairmont Peace Hotel this evening, with talks scheduled to pick up again in the largest business city in China.

Expectations for a breakthrough in the trade talks remain low.  Trump should expect the trade talks to be futile after his Twitter rant. President Xi has the support of the Chinese people. Every time Trump attacks Xi, he is raising the Chinese President’s popularity and reinforcing stronger resistance to Trump’s demands. At the same time, the U.S. election gets closer and closer, and the global economic slowdown eats away at the U.S. economy.

No one knowledgeable of negotiations will deny that the sides are further apart than they were three months ago when negotiations broke down, and each side blamed the other for the collapse of negotiations. China is pushing for compromise, knowing that Trump will not compromise. They believe that if Trump is pushed into panicking, they won’t have to give much to get the deal they want.

U.S. soybean exports, pork exports and on and on are falling to China. After the president’s tweets, soybean futures extended their price decline, falling as much as 0.4% in Chicago.

The truth is the Chinese are running out the clock; they have nothing but contempt for President Trump. They’ve seen North Korea’s Kim Jong Un play him for a fool while building as many as 12 new nuclear weapons, expand their missile development program, and watch the Russian’s turn both Europe upside down with Brexit and continue to interfere in U.S. elections.

The Chinese and the North Korean’s cyber warfare capability is much greater, more powerful than that of the Russians. If they decide to join the Russians to re-elect President Trump, it’s with the intent of bringing down the United States without a shot fired. At this point, all three nations may believe they’ll get more, however, taking advantage of Moscow Mitch unwillingness to defend the upcoming 2020 election from foreign interference by turning on Trump and electing a Democrat House, Senate, and President.

A Democrat-controlled government would be more likely to negotiate with reasonable demands that would end the world-wide trade war, the Russian sanctions and negotiate a nuclear freeze with North Korea that would lift its economic sanctions.

Black voter turnout was only 59.9% in 2016 as opposed to 66% in 2012. Trump’s racist attack strategy will likely drive a record black turnout in 2020 while women voters turned off by his misogyny and treatment of border children will drive his net vote among women to as low as 38%. Trump doesn’t have the upper hand, he has a losing hand.

Those that say he doesn’t have a thought out policy missed his old advisor; Steve Bannon’s repeated assertions that he would prefer a culture war election over a policy election. Trump’s waging a cultural war that will retire him, another 12-18 GOP members of Congress and Mitch McConnell.