Trump and Pence Must Both Resign Immediately: President Pelosi Should be Sworn in ASAP 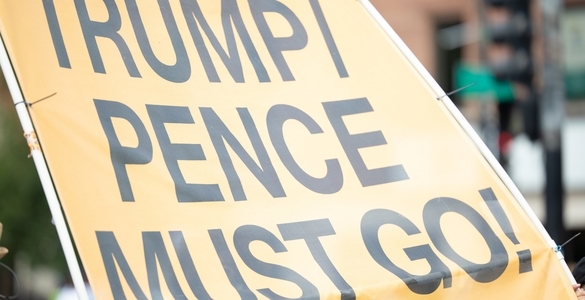 Intelligence officials were warning Trump and Pence about the severity of the pandemic as early as January, but couldn't get them to do anything about it. They were more worried about covering up Trump’s crimes.

The secret tape recording obtained has North Carolina Senator Richard Burr chatting up the coronavirus with some of his donor-class constituents. What Burr says said in February proves that President Trump and Vice President Pence was being warned of the systemic and deadly danger of the epidemic approaching while he and the White House was minimizing the threat.

"There's one thing that I can tell you about this: It is much more aggressive in its transmission than anything that we have seen in recent history," he said, according to a secret recording of the remarks obtained by NPR. "It is probably more akin to the 1918 pandemic."

Trump and his entire administration’s inactions directed towards conquering the coronavirus threat from early January amount to criminal nonfeasance, malfeasance, and misfeasance. The lack of any preparation, the nonresponse, and then the slow-rolling response to this pandemic could end up killing thousands of people unnecessarily.

Joe Biden, the presumptive 2020 Democratic Nominee, slammed President Donald Trump over his handling of the coronavirus pandemic Friday. Biden accused Trump of being “behind the curve through his whole response” is by far the nicest representation of the incompetence and disinterest of Trump, his Kakistocracy, and willfully incompetent elected GOP lawmakers in Congress.

Biden, speaking on a conference call with reporters, offered a series of blunt missives for Trump, and criticized him for repeatedly providing the American people with misinformation about the virus. Biden said…

“Step up and do your job, Mr. President,”

“In times of crisis, the American people deserve a president who tells them the truth,” Biden said. “Unfortunately, President Trump has not been that president.”

“People are scared. They’re worried. They don’t know quite what to do," he added. “He has been behind the curve throughout this whole response."

Trump’s only response was an insult to “Sleepy Joe.”  The real answer is for Trump and Pence to step aside for the swearing-in of someone who has proven to be competent, Speaker Nancy Pelosi.

We need a President that’s capable of managing the worst economic disaster since the Great Depression of the 1930s. At the same time, she manages the worst health crises humanity has experienced since 1918’s Spanish flu.

If Trump and Pence don’t resign and put the country in the competent hands of Speaker Pelosi, the economic fallout and the length of the economic depression that approaches will last a decade rather than 2-3 years. President Pelosi will be able to work exceptionally well with President-elect Biden after the November election; it’s a truth that no one should ignore.