Trump and Giuliani, Trying to Murder the U.S. Democracy 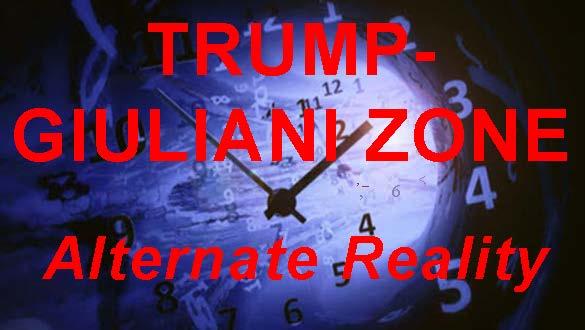 He’s getting $20,000 a day from the Trump campaign, and all he has to do is destroy our nation’s democracy. What’s more likely, he and the screwball group of lawyers backing him up are going to wind up disbarred and or suspended from the practice of law – even if Trump grants them a presidential pardon for all crimes they commit.

Rudy Giuliani’s press conference today was an absolute train wreck. While his dyed hair dripped, lies poured from his mouth nonstop while he insulted reporters covering his news conference. Giuliani and the lawyers at the news conference resembled a bunch of shyster lawyers than honorable bar members.  Even the FOX network is taking exception to the former New York City Mayor.

Giuliani claims viable path to victory despite lack of evidence

Despite his promise to President Trump to prevail and hand back the presidency from Joe Biden, there is no viable way to advance the two remaining active cases to the U.S. Supreme Court to overturn the 2020 election. That goal is a fantasy.

What is not fantasy is President Trump issuing dozens of pardons to his family, sycophants including Giuliani and his supporting cast of shyster lawyers, who will still face everything from suspensions of their licenses to practice law to outright disbarment. Accepting the pardons without any charges being entered is an admission that they committed crimes.  That will make it much more likely they are debarred rather than suspended from law practice.

We reported that Senator Lyndsey Graham crossed a line a few days ago. He may be facing disbarment and criminal prosecution for his attempt to persuade the Georgia Secretary of State to throw out, lose, legal ballots. Now stories appear all over the media landscape, pointing out that he may find himself not only the subject of an ethics investigation but also a target of an FBI investigation. It now has been revealed that not only will the Republican Secretary of State of Georgia testify against him, but there may be one or more witnesses that heard the conversations willing to step forward. Again, Trump can pardon Graham, but he’ll have to admit to the crime or accept the pardon will acknowledge “Lady Graham” is guilty of one or more felonies.

The impact on Wall Street has been limited. It’s been stoked by the $3 Trillion injected into it by the Federal Reserve and nervous anticipation that there’ are at least two apparent vaccinations for Covid-19 on the horizon, that may be available to the general public in phases starting in May. By then, thanks to President Trump’s resistance to social distancing and requiring the wearing of masks, we could be seeing 300,000 infections a day and 2,500 deaths a day. Let’s not delude ourselves; this pandemic is on its way to kill many more people in the United States and around the world than the Spanish flu of 1918.

President Trump knows if he is forced to leave office by January 20, 2021, he’ll be the center focus of criminal investigation in New York by both the State’s Attorney General Leticia James and Manhattan DA Cyrus Vance Jr.

They will bankrupt the Trump Organization and end up indicting Donald J. Trump, his three oldest children, and an immense chorus of executives from his businesses, accounting firms and even bankers. The coming wave of indictments may even bring down Deutsche Bank.

President-Elect Biden has told his staff he doesn’t want his presidency consumed with criminal investigations into Trump, his current and former cabinet officials, or the sycophants that committed countless felonies the past four years. Still, Trump’s willingness to attempt to overthrow the democracy is a deal-breaker that will force the next U.S. Attorney General to either name several special prosecutors or turn these criminals over to the notorious SDNY for investigation and possible prosecution. One thing for sure is Cyrus Vance Jr. and New York’s AG Letitia James are not going to sit back and defer their due diligence pledge to the people of the State New York and the American legal system.