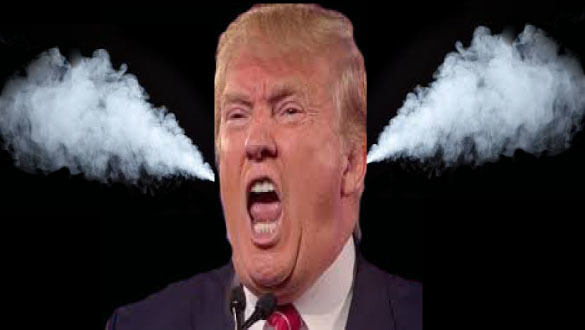 Under the heading of “Does President Trump really understand what he’s saying and doing” he tweeted Sunday morning his belief that his tariffs are “working big time” and is claiming the money raised from these new import taxes will go a long way to helping pay down America’s large debt. He’s either lying or a moron when it comes to an understanding of basic economics and public finance. 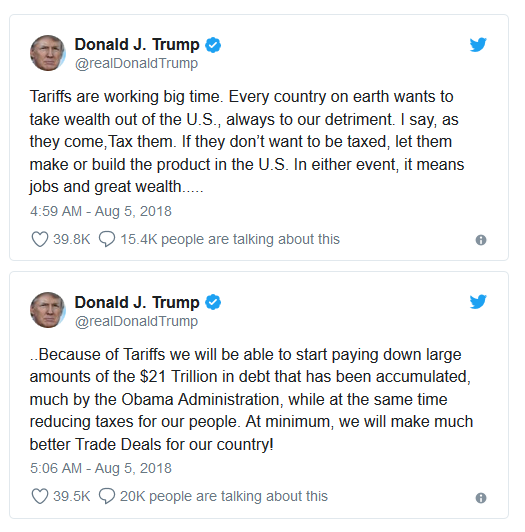 “There are already signs that prices are rising because of Trump’s tariffs. Coca-Cola is raising prices on its drinks because his aluminum tariffs are making its cans more expensive, the company says. Winnebago, the maker of RVs, also has raised some of its prices, blaming higher steel and aluminum costs. Over time, U.S. companies are likely to switch suppliers or change their products to use less of the higher-costing goods, but that doesn’t happen right away.”

Trump’s claim that tariff’s are reducing the nation’s debt “big time” and not being honest about who’s paying these increased tariffs the President’s claim that the tariffs regardless of who is shouldering their burden is an exaggeration at best.

Trump’s claim that money raised from the tariffs will help pay down the national debt, of the United States which is over $21 trillion and accelerating higher by over $1.6T a year thanks to the GOP tax cuts on the wealthiest Americans, amounts to a paltry $21 billion, a minuscule percentage (0.1 percent) of the national debt.

Bottom line: The tariffs imposed by the Trump Administration do little to counterbalance all the money Trump has added to the debt. They can cover the cost of the puny $12 billion in aid to farmers hurt by the tariffs.

The scariest thing not being discussed is the long-term impact of Trump’s tariffs that do hurt foreign companies. These companies over time will find other sources for American products. If China and others look elsewhere for alternative suppliers for the U.S. goods they’ve been importing like soybeans and whiskey, U.S. farmers and businesses may lose their market share to other countries like Brazil, Argentina, Australia.

This risk of losing share in the international marketplace has been completely ignored by the Trump Administration who have repeatedly argued that a little short-term pain from the tariffs will be worth it in the end when the president negotiates new trade deals and terms with other nations that lower trade barriers.

Trump’s assurances that the China, Iran, and others will cave at his feet is compounded by his exaggerations of working towards ending the trade war via ongoing negotiations.

Trump claims that serious discussions with the European Union to potentially reduce some tariffs is off and running. Many watching the situation say at best that that claim is another exaggeration. They point to the escalation of the trade war about to take place with China. President Xi and his Administration show no sign of backing down and Trump is about to impose tariffs on an additional $216 billion worth of Chinese products in coming weeks.

WallStreetRebel.com is warning that all of this is going to end very badly for the financial markets if it’s allowed to continue. Besides the President’s ignorance about public finance not being a good recruiting point for those considering an undergraduate degree in business or economics at the Wharton School of Business, his alma mater. His ignorance could lead to economic disruptions that lead to a devastating financial panic