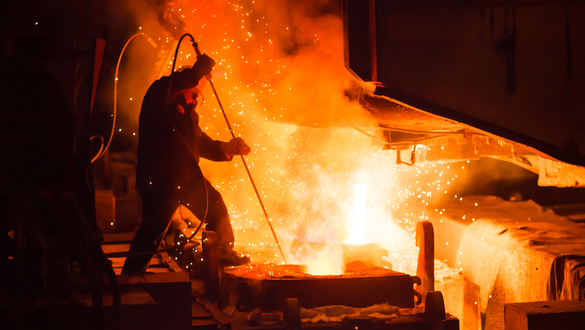 Benchmark steel price levels have fallen around 50% below their peak levels seen in July 2018. The U.S. steel industry is laying off workers, closing plants and cutting production.

When U.S. President Trump imposed a 25% tariff hike on steel imports back in March 2018, panicky U.S. buyers rushed in droves to place their new orders before their supply was interrupted, which led to a spike in prices.

Domestic steel production companies welcomed this move. Many of them even announced ambitious growth plans with fanfare. The USSC revived a couple of blast furnaces located in Granite City, Illinois, where Trump took advantage of the situation and gave a powerful speech about the steel industry’s resurgence due to his actions.

However, all it took was a year for entire things to fall apart. Benchmark steel price levels have fallen way below their levels before the tariff imposition and are currently around 50% below their peak levels seen in July 2018. The steel industry has been forced to cut back its production plans.

Granite City smelters are still operational at the moment. However, that’s going to change very soon. United States Steel, a Pittsburgh-based steel titan, has started to let go of scores of steelworkers at two other blast furnaces located near East Chicago, Indiana, and Detroit. Other steel manufacturers are shutting down mills, or reducing employee hours, or have idling employees in Pennsylvania, Kentucky, Louisiana, and West Virginia. Overall steel mill employment rates remain mostly unchanged compared to 2 years ago.

This could be a massive political nightmare for President Trump, who had stormed his way to office back in 2016 by promising to revive manufacturing prospects in the U.S. and help blue-collar American workers.

Thanks to these new tariffs, tax cuts which helped corporates retain a lot of money, and Trump’s pro-business election rhetoric, steel firms spent money without looking back, adding production capacity despite the domestic market having no requirement for additional steel. Interest rates were also at historically low levels, which encouraged the steel sector’s investment spree in improved and new equipment and plants.

However, Trump’s erratic behavior in his ongoing trade war against other countries led to the world economy entering a general growth slowdown. U.S. manufacturing and the construction industry are the primary consumers of American-made steel – two sectors that are currently experiencing a recession.

Timna Tanners of BofA Merrill Lynch Global Research stated that adding more capacity was an unwise move to make. She added that higher capacity and falling demand was a deadly combination, stating that the steel industry was up for a painful reality check.

As per the latest estimates released by prominent analysts, over 50 companies have announced new projects, expansions, and restarts that will enhance domestic steel manufacturing capacity by more than 20% during the next 2 to 3 years.

The AISI, which includes multiple domestic steel manufacturers, and officials from the Trump administration, believe that the latest tariffs had many benefits as they had boosted the prospects of U.S. production companies and curbed imports.

While it is true that foreign steel imports have reduced greatly in domestic markets, from 30% to around 20%, it still doesn’t matter since the current domestic production capacity is greater than the demand for steel in the U.S. market, based on the projects that have been announced. There would be no change even if foreign imports were reduced to zero.

Additionally, when more capacity starts becoming available from next year, the demand could start slowing down further. Auto manufacturers are increasingly moving to aluminum instead of steel. Non-residential construction projects have already hit their peak limit.

This has raised concerns that steel prices may tumble even further. Benchmark hot-rolled coil prices have already fallen from over $900 per ton seen in July 2018 to just around $470 today, stated Timothy Triplett of Steel Market Update. He added that these tariffs hadn’t provided the benefits they were supposed to yield.

Trump imposed these metal duties around the world and justified his actions stating that these imports were threatening the country’s national security. However, few people agreed with this justification, with even the Defense Department refusing to support this argument. Additionally, all major countries involved in steel exports, especially allies like the EU and Canada hit back with retaliatory tariffs on U.S. imports.

Trump had recently removed the steel tariffs imposed against Mexico and Canada after these countries decided to approve a revised NAFTA agreement. However, the damage had already been done by then.

Furthermore, Trump’s tariffs haven’t even solved the fundamental issue at hand – a global slump caused by overproduction by Chinese suppliers, who account for more than 50% of the world’s steel supply. That is because China’s contribution to the steel imported by the U.S. was only around 2% since Washington had already imposed multiple tariffs against China for illegally subsidizing China-based producers and dumping excess steel in its markets.

These Trump tariffs didn’t solve the inefficiencies prevailing in the U.S. steel industry either. Instead, this temporary measure only delayed the shutting down of higher-cost, older integrated mills that we're unable to compete against technologically advanced mills, which comes with electricity-based arc furnaces.

For instance, AK Steel Corp, an Ohio-based steel company had announced in October 2015 that it would be shutting down its Ashland facility. However, it was only in October that the company informed Kentucky state officials of its plans to shut down its Ashland operations permanently before 2020, terminating over 260 employees.

A spokesperson for the company stated that while the tariffs had given the company some breathing room, it wasn’t enough for saving the steel plant from unfair trading activities and global steel production overcapacity.

With steel prices falling further, inefficient mills may be shut down soon as the steel industry adopts nonunion lower-cost operations or mini-mills. However, even that isn’t guaranteed. Long-term steel purchase contracts, labor agreements, and unwillingness among steel companies to let go of old facilities could delay restructuring measures. Also, companies are not likely to stop expanding their operations or cease their new projects, which could be a major problem.

Senior research fellow, Christine McDaniel of the Mercatus Center at George Mason University, stated that such news indicated that tariffs were affecting the long-run competitive advantage of U.S. steel negatively. He added that while it was a painful process, the government had to allow the markets to do their thing.

Apart from backfiring horribly, the tariffs also hurt many small steel players and users in the steel industry, who are now accusing Trump of being unfair in his actions.

The U.S. Commerce Department permitted steel purchasers to be exempt from these tariffs if they were able to prove that the steel they imported wasn’t available domestically for meeting their requirements. Most of these requests were approved immediately, unless another U.S. steel producer filed an objection, claiming that this product was available domestically.

McDaniel discovered that 59% of the objections that were filed originated from two firms – Nucor Corp and United States Steel, who are both staunch supporters of these tariffs who have close ties to many administration officials.

Before becoming Trump’s primary trade negotiator, Lighthizer had represented US steel manufacturers while practicing private law. Nucor was crucial in financing a documentary that was critical of Chinese exporters and regulations, which was made by Trump’s primary trade adviser Peter Navarro. Dan DiMicco who was once Nucor’s CEO was also part of Trump’s presidential transition team.

Rival, small steel companies have complained that the administration’s process for determining tariff exemptions and other details has caused them to lose millions.

NLMK Steel, which is a steel company that employs over 1200 workers at steel plants in Gary, IN and Sharon, PA, purchases slabs from its Russia-based parent company and uses them for manufacturing finished steel coils. These are sold off to construction and other industries.

NLMK’s U.S. operations’ President Bob Miller stated that there wasn’t any domestic market demand for slabs. Mills utilize them for their internal needs to produce finished coils that they sell to customers. This means that NLMK is not able to get sufficient domestic steel, in spite of companies like USS stating that they could supply market demand.

NLMK had to pay over $170M in additional tariffs to purchase imported slabs. These costs squeezed its margins and forced the firm to start laying off workers and reduce employee work hours.

Miller stated that this policy showed how the government was picking winners and losers. 1.5 years later, these firms were still charging sky-high costs for supplying steel. The Chinese issue hasn’t yet been addressed properly, he claimed.

California Steel Industries is another company, just like NLMK. This Fontana-based firm, which has over 930 employees, purchases a majority of its steel slabs from Brazil. California Steel’s CEO, Marcelo Rodrigues, stated that his firm had filed over 266 requests, seeking tariffs exemption for foreign steel imports. All of them were rejected.

These tariffs led to the company losing over $21M in 2018. The firm is expected to release a negative earnings report for the Q4 period. It has reduced its temps and isn’t hiring anymore.

Rodrigues stated that the tariffs were not protecting the US steel industry at all. Instead, it was actually hurting them.

Neither USS nor Nucor has responded yet to requests seeking their comment. Nucor, a company based out of North Carolina has electric arc furnace facilities and has made huge profits from these tariffs. It has announced over $2B worth of investments since June 2018. However, its income in 2019 has taken a substantial hit. USS has also released a warning indicating a potential loss report for the Q4 period. Both the companies’ stock prices have fallen significantly compared to their prices during early 2018.

A Commerce Department spokesperson did not deny that tariff exclusion requests, which objections had lodged against them, were approved very rarely. However, he stated that the Department reviewed all requests in a meticulous, fair, and transparent manner.