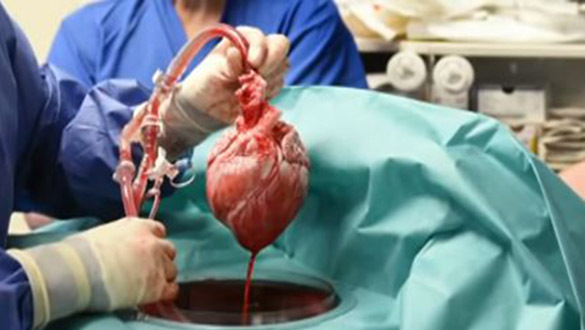 We live in an age of technological and medical miracles facilitated by accelerating technologies making leaps in science, engineering, and medicine that would take 50 years in 5 years or less. We are, in reality, on the verge of a brave new world.

It's long been predicted by science fiction writers and then by medical theorists that someday organs from pigs could be adapted for transplant in human beings. With the accelerating technologies that have taken place in the science of genetic engineering, the world's first successful heart transplant from a genetically modified pig into a human being has taken place, according to a report printed by the New York Times.

Dr. Bartley Griffith, the director of the cardiac transplant program at the University of Maryland Medical Center, performed an eight-hour transplant operation of a genetically modified pig's heart; he was quoted as saying…

"It's working, and it looks normal. We are thrilled, but we don't know what tomorrow will bring us. This has never been done before."

The recipient of the first inter-species genetically modified heart David Bennett Sr., volunteered to first transplant test subject because he was so sick that he couldn't qualify for a human heart transplant. However, the critical 48-hour, post-procedure period has passed without incident as his cardiac surgeon and medical team continue to closely monitor him for signs and symptoms of rejection. Even after the transplant, Bennett remains connected to a heart-lung bypass machine.

Of particular concern is the danger of a rare infection from a pig virus infecting humans.

Dr. Christine Lau, chair of the department of surgery at the University Of Maryland School Of Medicine, was quoted by the BBC  as justifying this breakthrough transplant surgery by pointing out…

"People die all the time on the waiting list, waiting for organs. If we could use genetically engineered pig organs, they'd never have to wait; they could basically get an organ as they needed it."

"Plus, we wouldn't have to fly all over the country at nighttime to recover organs to put them into recipients."

There are more than 100,000 patients on the waiting lists for transplants in the U.S., and about 17 people die on transplant waiting lists every day because of the short supply of donors. Medical scientists, researchers, and practitioners hope this surgery will springboard a new era of medicine where genetically crafted replacement organs from pigs become a viable alternative and extend the lives of critically ill patients.

According to the United Network for Organ Sharing, in 2020, 41,354 patients received transplanted organs in the United States, with more than 50% receiving kidneys. Still, xenotransplantation, the process of transplanting organs from animals to humans, despite having begun in the late 1960s,  multiple people received chimpanzee kidney transplants. Still, the longest to survive has only been nine months so far.

In 1983 an infant survived only 20 days after receiving a baboon heart. Still, pigs are easier to raise, develop faster into adults, and many heart patients with valvular issues receive pig heart valves already every year. With the leaps in genetic engineering, there's a real chance for people to live several years, even decades, with xenotransplantation organs.

The genetically altered pig's heart, provided by the Virginia-based regenerative medical company Revivicor, has ten genetic modifications, including one inactivated gene that blunts aggressive human rejection and another inactivated growth gene that keeps the pig's heart from growing after implantation, according to the New York Times.