Trade War Trump Card: Chinese Firms Directed Not to Travel to the U.S. or Its Allies 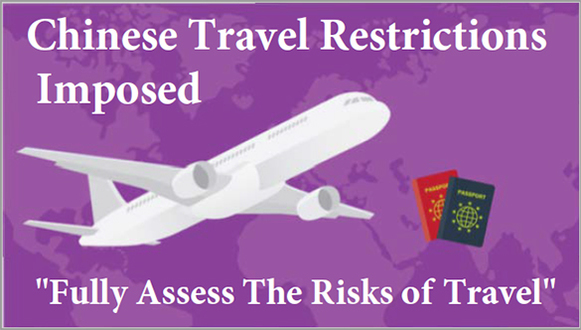 In an ominous sign that the U.S. China trade war isn’t over. China’s government is telling state-run enterprises to avoid business trips to the U.S. and its allies and to take extra precautions to protect their electronic and digital devices from hacking by the U.S. and foreign intelligence services.

News reports from several mainstream western press organizations are confirming that the Chinese Owned Assets Supervision and Administration Commission (SASAC)  -- a regulatory body that oversees about 100 Chinese government-run companies is warning against travel to the United States and the other countries in the Five Eyes intelligence-sharing pact: the U.K., Canada, Australia and New Zealand.

Also the Chinese government arm the SASAC is warning that if travel to these countries is unavoidable the use of only secure, company-issued laptops meant for overseas use if traveling is necessary. The warning came with an order from the government that Chinese companies verify which files employees are traveling with and to only store them on secure USB flash drives.

Fears of corporate espionage arrest have been heightened December after the arrest of Chinese Huawei Technologies Co. executive Meng Wanzhou in Canada on behalf of the U.S and the arrest by China of two Canadian citizens in an apparent response.

The U.S. government has stepped up its attempts to catch and prosecute executives at Chinese companies who are allegedly stealing technology. In recent weeks, Jinhua Integrated Circuit Co. and its Taiwan-based partner United Microelectronics Corp. were the first companies indicted under the U.S. Justice Department’s new initiative to discourage trade secret theft from U.S. Companies.

The strain in relations between Beijing and Ottawa have also been inflamed after a Chinese court sentenced a Canadian man to death for drug trafficking after a one-day retrial. The conviction has prompted the Canadian government to urge its citizens to “exercise a high degree of caution in China due to the risk of arbitrary enforcement of local laws.” This was followed by the Chinese government issuing a warning its citizens to "fully assess the risks of travel" before doing so. China’s foreign ministry spokeswoman Hua Chunying told reporters at a regular briefing yesterday...

“As long as foreigners including Canadians abide by the law, their freedom and safety is guaranteed…It is Canada, not China that is arbitrarily detaining foreign citizens under the guise of the law.”