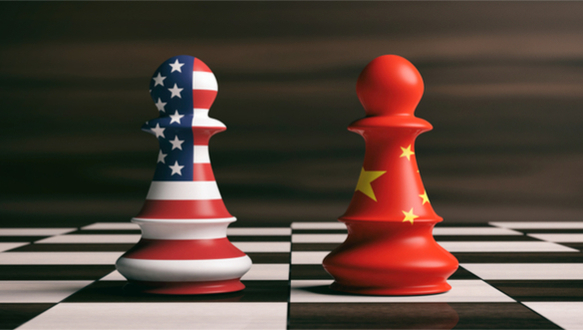 Trump badly needs a win. American farmers and Chinese import-dependent businesses are screaming bloody murder as bankruptcies are already surging to numbers we haven’t seen since the great recession. With all this pressure as a backdrop will the trade deal Trump announces be anything but political window dressing?

President Trump is expected to announce today that he and President Xi Jinping of China will meet here in the United States, either at Mar-a-Lago or Washington to resolve the remaining trade issues in order to a final agreement between the United States and China to end the trade war the two countries have been waging for several months.

The announcement is expected to come during a meeting between President Trump and Chinese special envoy Liu He, who arrived in Washington at the beginning of this week for to meet with American negotiators that meet last week in Beijing.

The trade deal isn’t done yet, and both sides intend to continue to negotiate over remaining issues. However, scheduling of the summit between the two leaders suggests both sides are eager to come to a compromise and end months of tensions and economic damage the trade war has inflicted on both countries. U.S. farmers and manufacturers who have been crippled by the trade war are hopeful that any deal signed between the two countries will mean a quick rollback of at least most of the tariffs that the United States has imposed on Chinese goods.

“Administration officials had expressed progress in the discussions, giving confidence to both sides to move forward with a presidential summit meeting.”

“The talks are progressing in such a matter that confidence is building. An agreement is more likely than not over the next several weeks, though there is still work to be done.”

Myron Brilliant comments, however, demonstrate that any signing that takes place at the end of the summit may not be the end of this trade war with China. Trump can walk away from the negotiating table as he did with North Korea if he thinks for any reason the deal isn’t sufficient. This has many skeptical that the summit is nothing more than a diversionary tactic to take attention away from the growing controversy over the Mueller report and the wave of subpoenas from Congress that have and will be issued. Moreover, now the upcoming coming fight to release the report and six years of Trump’s tax returns being requested from the IRS by Congress.

Trump said this morning negotiations Chinese were “going very well” and that the two countries were headed toward an agreement that might be one of “the biggest deals ever made.”

“It’s a very complex deal. It’s a very big deal, we could have made a quickie, but we’re in a very good position.”

There have been more than nine rounds of negotiations in which the United States has pressured China to dramatically increase its commitments to on purchase American goods, opening markets to foreign business and increasing protections for foreign intellectual property in a bid to rebalance an economic relationship that Mr. Trump says is unfair for American workers.

The date and location of a summit meeting between the two leaders have yet to be worked out. Trump wants the meeting to take place at his “Winter White House” Mar-a-Lago, Mr. Trump’s Florida resort to help promote the property, China instead wants the summit to be an official state visit in Washington, or in a third country that’s neutral.

“I believe him. However, to be a ‘great’ deal, it must allow us to do in China what they can do in the US, and it must have real enforcement mechanisms.”

“Last week @POTUS told us he would not sign a ‘good’ trade deal with #China he would only sign a ‘great’ one.”

Rubio like many is concerned that announcing a summit meeting before a final deal could be interpreted as the president is surrendering some of his negotiating leverage in a rush to make an agreement. Democrat and Republican have both urged President Trump to hold out for a tougher deal to combat Chinese practices that American businesses have long seen as anti-competitive and that risk our national security.

Chinese negotiators have resisted American demands for an enforcement mechanism that would allow tariffs on Chinese goods to snap back if China violated the terms of the deal, and that would forbid China from retaliating in return.

Mr. Brilliant of the U.S. Chamber of Commerce insists that foreign stakeholders in Chinese businesses would be looking closely at any deal to see if it contains a strong enforcement mechanism that would hold the Chinese accountable to their obligations saying….

“That is what would separate this agreement from previous agreements.”