While President Trump stammers continue to claim the coronavirus is being falsely blown up into a crisis by MSNBC, CNN, and other mainstream media outlets, the stock market has fallen over 2000 points in the last four trading days and the down turn continues today!

The current correction we are experiencing  on Wall Street for the S&P 500 averages is likely to last atleast 4 months longer. Christian Mueller-Glissmann and Alessio Rizzi of Goldman Sachs Group Inc., believe the lingering uncertainty over the coronavirus and the constraint facing Federal Reserve policymakers is likely to continue and won’t see it bottom until at least July.

Over at Citigroup, Jeremy Hale and his fellow analysts have also come out warning of more misery, pointing to a lack of clarity on both the virus outbreak and Fed monetary policy. Hale and his team are expecting the S&P 500 to fall to 2,730, 10% below its 200-day moving average. So they’re looking for another 12% fall in the key index. This would put the S&P on the verge of a 20% correction and at the risk of becoming a bear market officially. 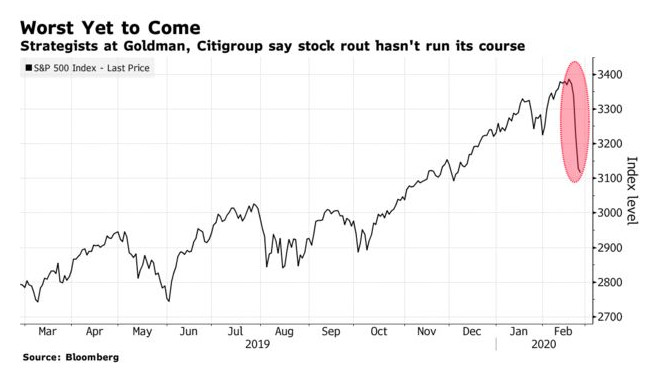 Hale wrote in a note to Citigroup’s brokerage clients….

“We are reluctant to buy the dip in risk assets just yet,” “It will likely take a further tightening in financial conditions to force the Fed’s hand into acting,” “We await signs of a policy response to pull the trigger on risk.”

While the Federal Reserve policymakers have been cautious in their comments, they have signaled a willingness to cut rates and have already been tapering Treasury purchases during the current quarter. The market appears to have priced in two additional rate cuts before the end of this year. However, blaming the 2000 point sell-off that has taken place in the Dow, on the Federal Reserve is absurd.

Nouriel Roubini, chairman at Roubini Macro Associates and a professor at New York University’s Stern School of Business, is pointing to the economic slowdown in China since the imposition of tariffs in its ongoing trade war with the Trump Administration.

Roubini, during an interview on Bloomberg Television with Jonathan Ferro, he called hopes for a quick rebound in China’s economy “delusional.”

Roubini expects the coronavirus outbreak, and the trade war’s impact will push Chinese growth down from about 6% in 2019 to 4% growth in 2020. Other analysts are warning that China is going to slow and see a string of quarters that will show the negative growth and the risk of a recession that will hurt global growth.

While he expects the Federal Reserve to cut interest rates in March, he doesn’t think that kind of stimulus will be able to fix the negative supply shock dealt with by the virus. Roubini, like many other economists, is warning that a recovery won’t be V-shaped…

“People, when they talk about V-shape, they don’t know what they’re talking about,”

“Without more clarity on stabilization of global growth, it seems too early to add risk tactically… with global growth still weak, the shock from the coronavirus lingering and less scope for monetary and ﬁscal easing, the risk of a more prolonged drawdown remains.”

The stock market opened and rallied over 300 points before reversing and closing down for the fifth straight day, extending its loss to 8%.