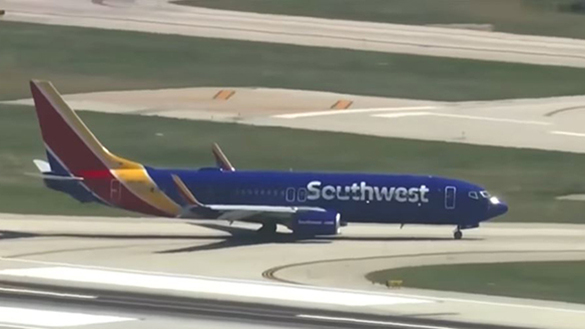 Since Friday night, Southwest Airlines has canceled over two thousand flights; it is the airline with the most passengers impacted this holiday weekend, affecting tens of thousands more than any other airline.  Weather and air traffic control problems, according to the airline, were to blame for the canceled flights.

According to FlightAware, the airline canceled 24 percent of all scheduled flights on Saturday, a record high. Southwest has canceled or delayed hundreds of flights by Sunday afternoon, according to the company.

"We experienced weather challenges in our Florida airports at the beginning of the weekend, challenges that were compounded by unexpected air traffic control issues in the same region, triggering delays and prompting significant cancellations," the airline said in a statement on Sunday. "We've continued diligent work throughout the weekend to reset our operation with a focus on getting aircraft and crews repositioned to take care of our customers."

Southwest went on to say that recovering from the interruption has been more difficult than expected since the airline is running fewer flights than it did before to the epidemic, making it more difficult to rearrange customers' trips.

In a statement on Sunday, the Federal Aviation Administration stated that it had had a temporary lack of air traffic control personnel but that the situation had been addressed for some time.

"Flight delays and cancellations occurred for a few hours Friday afternoon due to widespread severe weather, military training and limited staffing in one area of the Jacksonville Air Route Traffic Control Center," the agency said. "Some airlines continue to experience scheduling challenges due to aircraft and crews being out of place."

Over several days in June, Southwest experienced significant interruptions, blaming technical issues both internally and with an external weather data provider. Crews were unable to make it to the aircraft on which they were supposed to work due to the delays, aggravating the situation.

Southwest's pilot's union issued a statement on Saturday stating that it was aware of the numerous cancellations on the airline. In a statement last week, the union expressed its opposition to the airline's recent decision to require vaccination against the coronavirus. Still, it claimed that the cancellations were not the result of any pilot protest.

Southwest pilots "always retain the greatest degree of accountability to their crews, their customers, and our airline," according to the union, which claims that management's "poor planning" and other external obstacles have caused them to "continue to overcome."

A request for feedback from the union representing Southwest flight attendants did not respond right away.

Southwest said last week that it would join many of its rivals in mandating all workers to get vaccinated, with a deadline of Dec. 8 for compliance being set for the company. Southwest has said that the requirement is required to continue doing business with the government after President Biden's directive requiring all major federal contractors to get the immunization.

"Southwest Airlines must join our industry peers in complying with the federal government's Covid-19 vaccination directive," the airline's chief executive, Gary Kelly, said in a statement announcing the mandate. "I encourage all Southwest employees to meet the federal directive, as quickly as possible, since we value every individual and want to ensure job security for all."

Pilots union had cautioned that enforcing such a requirement might result in labor shortages and flight delays, even though it did not oppose immunization.   The union is suing the airline for a series of "unilateral measures," including vaccination.

U.S. airline United Airlines, which was the first major carrier to impose a vaccination requirement, recently announced that nearly all of its 67,000 employees had been vaccinated, with the exception of about 2,000 who had applied for religious or medical exemptions and fewer than 250 who could be fired if they do not comply with the mandate.

According to Delta Air Lines, employees who do not get immunization will be charged $200 extra per month for health insurance, which will not mandate vaccination.