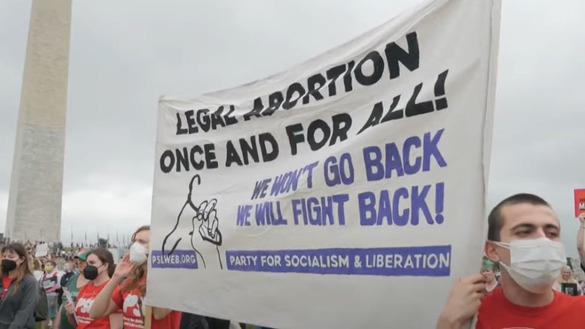 Protesters assembled in Washington, New York, and other places around the U.S. not even two weeks after the draft of a Supreme Court judgment that would have overturned Roe v. Wade was made public and leaked.

While chanting "We will not go back" and "Abortion is a human right," demonstrators in the nation's capital marched to the Supreme Court. The march was held during a downpour. Over a thousand protesters walked over the Brooklyn Bridge in New York City to protest. Pro-choice demonstrators gathered in a park near City Hall in Los Angeles to express their support for the legalization of abortion.

On Saturday, nearly two weeks after the disclosure of a draft ruling from the Supreme Court that would overturn Roe v. Wade, thousands of people gathered in cities all around the country to demonstrate against the court's decision. When people gathered close to the Washington Monument, some wore shirts that read "Keep Abortion Safe and Legal" and "Bans Off Our Bodies." Even while several of them acknowledged that Roe v. Wade would most likely be overturned, they swore to continue fighting to protect women's access to abortion.

Rachel O'Leary Carmona, the executive director of the Women's March, a nonprofit organization that helped coordinate the events, stated that more than 450 marches were scheduled in cities across the country on Saturday. Some of the cities that were expected to host rallies included Chicago, Nashville, and Austin, Texas.

There are still several months until the midterm elections, and President Biden and congressional Democrats are hoping that they can utilize this issue for exciting voters. On Wednesday, Democratic senators' attempts to push legislation to ensure abortion rights across the country were unsuccessful. Republicans and one Democrat, Senator Joe Manchin III of West Virginia, stood in the way of their efforts.

Protesters assembled in Washington, New York, and other places not even two weeks after the draft of a Supreme Court judgment that would have overturned Roe v. Wade was made public and leaked.