Theresa May Will Ask the European Union for another Extension 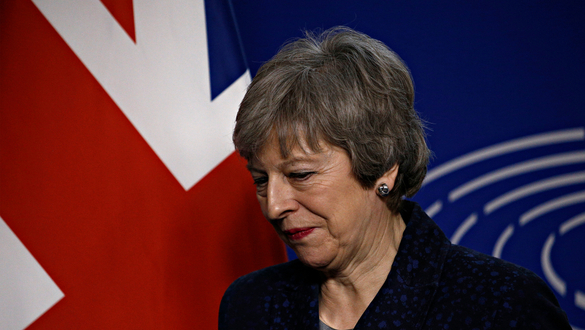 Despite three Parliament votes on United Kingdom Prime Ministers Brexit Plan, none have even been close to ratifying her proposal. As each day passes the only thing the UK’s political leaders agree up on is they are not willing to leave the EU without a deal. A hard Brexit is out of the question.

It’s worth a chuckle or two but Theresa May still thinks she can get a Brexit deal through the UK parliament before May 22, 2019, and announced on Tuesday that she would once again ask the EU for an extension to the Brexit deadline in hopes of giving her time to negotiate with members of Parliament to "break the logjam".

Even crazier after meeting with her cabinet for more than seven hours on Tuesday, she gave a statement from Downing Street announcing she intends to meet with her arch enemy in Parliament Labour leader Jeremy Corbyn to hopefully to work towards a Brexit plan.  That proposed plan could pass but remains determined to stick with her withdrawal agreement - which was defeated in Parliament last week - would remain part of the deal.

Her comments in front of No. 10 Downing Street had a “Twilight Zone” feel when she said she wanted to work with MP Corbyn on a new Brexit Deal and put it to a vote in the Commons before 10 April - when the EU will hold an emergency summit on Brexit. If she and Mr. Corbyn do not agree on a single way forward, she proposed putting some options to MPs "to determine which course to pursue."

The PM said she understands that many in the UK are "so fed up with delay and endless arguments" they would prefer to leave without a deal, and she believed the UK "could make a success of no-deal in the long term." She was compelled to add that leaving with a deal was "the best solution." She went on to say…

"This is a difficult time for everyone. Passions are running high on all sides of the argument, but we can and must find the compromises that will deliver what the British people voted for. This is a decisive moment in the story of these islands and it requires national unity to deliver the national interest."

Increasingly Brexit is looking like a farce that’s tearing the United Kingdom apart and is already driving businesses, students and labor out of the country. The economic damage is going to be every bit as bad as the anti-Brexiters claimed it would be before the non-binding vote in 2016.

With nothing but sheer hope and stubbornness May refuses even to recognize a new binding Brexit referendum as a possibility. She’s now asking for an extension, one before 22 May, so the UK does not have to take part in European elections. As if the request for the 50+ days would somehow allow her Brexit plan to pass. It’s pure desperation.

The UK must present a plan passed by Parliament by April 12th and which must meet EU approval, or the United Kingdom must leave the EU with no deal in place, or it will be forced to EU elections and stay in the Union for about a year before trying again to complete its Brexit.

We believe at WallStreetRebel.com that the chaos in the United Kingdom will lead to the collapse of the May government, the EU will grant an extension, and in the end, there will be another Brexit vote. This one binding.