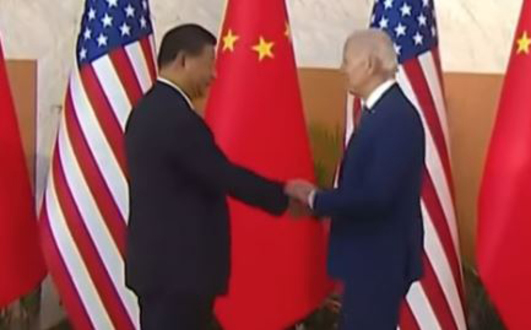 During a meeting on Monday with the President of China, Xi Jinping, President Joe Biden expressed his continued optimism that the United States and China would be able to cooperate together regarless of high-stake geopolitical disagreements.

On Monday, the President of the United States, Joe Biden, and the leader of China, Xi Jinping, reached an agreement to resume cooperation on climate change and other issues. This agreement boosts negotiations that have become bogged down and are behind schedule at the COP27 climate summit in Egypt.

At the G20 meeting, which took place on the island of Bali in Indonesia, the presidents of the world's two largest emitters of greenhouse gases gathered. At the conference, climate change will be fought for time with other concerns, such as the state of the global economy and Russia's conflict in Ukraine.

After U.S. House Speaker Nancy Pelosi infuriated China by visiting Taiwan earlier this year, the two countries agreed to restart climate talks, which melted the ice that had formed in their ties.

The news of the reconciliation came just as climate negotiators at COP27 were looking eastward for a sign that G20 countries were prepared to stump up more cash and greater promises in the battle against increasing global temperatures. Sharm el-Sheikh is a resort located on the Red Sea.

At the summit in Bali, the White House said that the world leaders "talked openly" about a variety of subjects. Even though President Biden expressed his disagreement with China's actions towards Hong Kong, Xinjiang, and Taiwan, he made it abundantly apparent that the United States would cooperate with China on important global problems in which both countries had a common interest.

According to a statement released by the White House, President Joe Biden emphasized the importance of collaborative efforts between the United States and China to address transnational challenges such as climate change and global macroeconomic stability, including debt relief, health security, and global food security.

In a statement, the Chinese Ministry of Foreign Affairs stated that it was in the "shared interest" of both China and the United States to "advance post-Covid global recovery, confront climate change, and address regional concerns via China-US coordination and cooperation."

According to the statement, the world leaders agreed to "jointly strive for the success" of the COP27 climate summit, which is now taking place in Sharm el-Sheikh, Egypt.

Following the breakthrough, the United States climate envoy John Kerry will have five days at the COP27 conference to engage in official discussions with his Chinese counterpart Xie Zhenhua.

In Egypt, where observers and nation negotiators have stated that talks on crucial topics have been mired down in political splits, the UN secretary-general expressed their satisfaction with the situation.

In recent weeks, Kerry has indicated that he and Xie Zhenhua have had several informal discussions, including meeting casually at the Sharm el-Sheikh conference.

Kerry had repeatedly urged China's leadership to allow formal negotiations to resume, stressing that discussions between the world's two biggest polluters were crucial to tackling the "existential issue" of climate change that "involves every nation, including our friends in China."

In a statement after the Bali meeting, China's foreign ministry said the countries had a responsibility "to keep a constructive relationship" and that they had a "mutual interest" in need to tackle climate change.

Even though all parties agreed to continue talking about the issue at hand, most of the meeting seemed to consist of a back-and-forth discussion on the many grounds of contention between them.

"I have no doubt that he grasped every one of the points I said. I grasped the meaning of what he was saying, "Biden told reporters.

Beijing regards Taiwan as an integral part of China and is working for the political unification of the island and the Chinese mainland. Xi has expressed the hope that this may be accomplished without resorting to violence, but Beijing cannot completely rule out the possibility of such a scenario.

Biden expressed his belief to the press that there would not be any immediate move by China to invade Taiwan. He said this in response to a question.

Xi informed Biden that the issue of Taiwan was "the number one un-crossable red line" in ties between China and the United States. He said it was a problem that the people of China should solve, and he hoped that the United States would live up to its obligations and words.

Concerning North Korea, which has been conducting tests of ballistic missiles and may be getting ready for a new nuclear test, President Biden said that he was skeptical as to whether China could manage Pyongyang. However, he believed that Beijing had a responsibility to make an effort to deter North Korea.

The White House has said that President Biden and Chinese President Xi have "reiterated their agreement that a nuclear war should never be waged and can never be won and highlighted their opposition to the use or threat of use of nuclear weapons in Ukraine."The White House listed global issues like climate, debt relief, health security, and food security as areas in which the two leaders "agreed to empower key senior officials to maintain communication and deepen constructive efforts."

Biden said to Xi at the beginning of the meeting, "As the leaders of our two nations, we share a responsibility to show that China and the United States can manage our differences, prevent competition from becoming anything near conflict, and find ways to work together on urgent, global issues that require our mutual cooperation."

Xi told Biden that the existing bilateral relationship is "not what the world community expects" and that the leaders must "elevate the partnership."