The World Oil Market Is Reeling From China Coronavirus 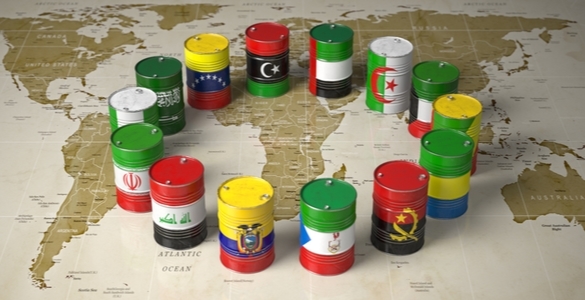 Russia and OPEC have been colluding to keep the price of oil as high as possible. Both need oil to be well over $80 a barrel to buttress their economies or face political and economic stress that could eventually lead to the end of each country’s regimes.

While both Saudi Arabia and Russia’s regimes are trying to murder their political enemies around the world, dismantle the post-World War II order and bring down the U.S. democracy, they have been impotent when it comes to manipulating the oil market.  The regimes focus on creating a stable oil price to stay above $60 a barrel, which they both need to keep their economies above water, much less to cover their economies and to prevent revolts by their citizenry.

They have been hesitant to cut their production of oil to bolster the price as the nightmarish world health emergency has developed in response to the Coronavirus that is hammering demand and the price for oil in China.  They are now seeing a huge surplus build. They had some help in keeping oil above $50 a barrel thanks to the civil war in Libya that has shut down oil exports, but now that a possible deal among warring factions in Libya threatens to flood the world market with more oil supply that could drive oil down into the low US$40’s.

If the warring sides can reach an agreement in Cairo on Sunday, it will restore the oil output, and the re-introduction of supply will dwarf the tentative production cut that was proposed during the OPEC+ talks that took place this past week.

A failure to cut oil production by 2+ million barrels a day, and to then have production ratcheted it up as Libya resumes exports would turn what’s already been a critically important test for the OPEC+ cartel into a supply nightmare.  It could turn into a potentially insurmountable challenge to overcome and act as a catalyst for a nose-dive in the price of crude oil of as much as 15%.

Bill Farren-Price, a director at consultant RS Energy Group. Said in a recent interview that…

“If Libya can restart exports, it will further complicate the math for the dwindling number of OPEC+ countries able to implement credible output cuts.”

“…additional barrels from other producers at a time when demand is suffering a major exogenous shock.”

The return of Libyan production as an exporting producer would come after the North African country has seen its oil production plunged to lowest in more than eight years.

The alliance between the Organization of Petroleum Exporting Countries (OPEC) and countries, including Russia (OPEC+), has suffered the worst periods of the oil market in its three-year history. The Coronavirus has slammed and hammered at the heart of global oil demand growth, as a result of China locking down cities that are home to fifty million plus oil consumers and shutting a huge swathe of manufacturing throughout the second-largest economy n the world.

Crude has already slumped about 20% in the past month, with U.S. prices dipping below $50 a barrel for the first time in more than a year. If oil prices bounce back soon, the budgets of entire nations from Saudi Arabia to Kazakhstan will suffer and may lead to civil unrest.

Saudi Arabia’s Crown Prince Mohammad bin Salman and his economic advisors have been pushing for urgent action, asking for an emergency OPEC+ meeting that would agree on a substantial production cut. The cartel is already making significant supply reductions, withholding about 2.1 million barrels a day from the market to offset the U.S. shale boom. Vladimir Putin has been reluctant to make any further cuts to reduction production/exports because Russia is literally an economic basket case.

Talks in Vienna this past week delivered over three days of intense negotiations delivered only a sliver of what the Saudis had wanted and what is needed to re-enforce the current world market price of oil. Foolish technical “experts” from the OPEC+ group stuck with their recommendation of a fresh cut of 600,000 barrels a day,  barely a third of the drop in demand from Chinese refiners. The Russians and the rest of OPEC+, including Russia, agreed to set a date for an emergency meeting. However, Russia still hasn’t given its approval of an exact date to hold this emergency meeting. OPEC+ couldn’t even agree on an extension of the existing output and export cuts for nine months additional month; until the end of 2020.

The interagency of Russia hasn’t been solved. Russian Energy Minister Alexander Novak promise to respond within days as to whether his country will support the recommended OPEC+ production cut of 600,000 barrels, puts that paltry cut in doubt. A Libyan peace accord would put as much as an additional 1 million barrels a day of oil to the market. That production and supply again could drive oil prices lower next week even before Libya starts producing and exporting again. Amrita Sen, chief oil analyst at Energy Aspects Ltd….

“The uncertainty over both how Libya and the coronavirus unfold” mean OPEC+ faces an “extremely difficult.”

The resumption of Libyan production is by no means guaranteed.

The internationally backed Tripoli government and General Khalifa Haftar, the military leader who’s Libyan National Army controls the oil-rich east and south of the country and has been blockading crude exports since the beginning of January.

The civil war in Libya has left more than 2,000 people dead and has created a proxy war between regional powers, including Russia, Egypt, and the United Arab Emirates. The country is inherently unstable and has seen regular bouts of violence and disruption to oil supplies since its famous dictator Moammar Al Qaddafi died at the hands of his people in 2011.

Citibank’s oil analyst Ed Morse calls $60 crude oil A ‘Wonderland’ and predicts it could fall to $47.

The oil market has already been significantly weakened by the Coronavirus, which by some estimates, is the biggest demand shock since the 2008 to 2009 financial crisis.

Ed Morse, the global head of commodities research at Citigroup Inc. in an interview with Bloomberg, agrees with the Saudi view that even if OPEC+ implements a 600,000 barrel-a-day cut, it wouldn’t be enough to keep oil from falling to $47 from the current $55 market price.

The Saudi’s are right, adding a surge of Libyan 1 million crude oil barrels a day to the world into that mix would be the recipe for an outright route in the price of oil.

“If there were a Libya-return headline this minute, the market would likely take a hit… It would certainly be bad timing.”

Russia and the rest of OPEC face the decision of cutting production to keep the current market price for crude oil at current levels or see its market price plunge to $38-$40 a barrel in the next 30 days.

Russia’s President Putin may be counting on the Coronavirus crisis ending very quickly or maybe strategizing to keep the warring parties in Libya killing one another as an alternative way to prevent his country from joining the rest of OPEC+ from having to cut 2.1 to 3 million barrels of crude oil production.