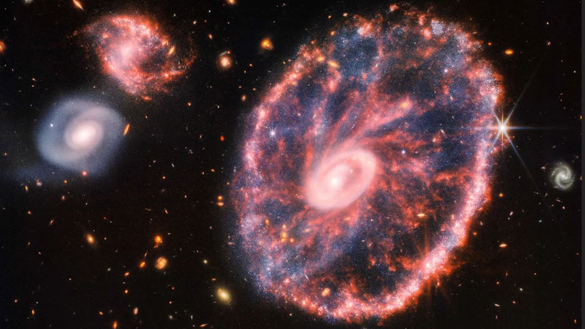 An updated view of the Cartwheel Galaxy was discovered by Hubble and several other observatories in the past. According to NASA, the James Webb Space Telescope (JWST) has provided fresh information on the development of stars and the black hole at the center of our galaxy, which is located around 500 million light-years from Earth.

On Tuesday, researchers shared the most recent photographs obtained by the lauded James Webb Space Telescope, which NASA operates. The most recent publication provides documentation of the Cartwheel galaxy, located around 500 million light-years from Earth. It was given this name because it has the appearance of a wheel, complete with a hub in the middle, a tire, and even wavy, neon spokes. Alongside Cartwheel, the Webb also captured images of two smaller galaxies that were its companions.

Following close on the heels of NASA's presentation on July 12 of five inaugural views taken by the Webb telescope, which is now the most powerful space observatory ever constructed, these fresh photographs have been released. Since their launch on December 25, the 18 hexagonal gold mirrors of the Webb have aligned to photograph additional objects in orbit; however, not all captured photos have been made public. Photographs have taken of the beautiful Carina nebula, which is made up of whirling dust and resembles jagged cliffs. The Southern Ring nebula, which looks like a soap bubble spreading from a dead star, has also been captured.

For a number of decades, astronomers have been looking into the Cartwheel galaxy. Initially, it was analyzed using the UK Schmidt telescope and the Anglo-Australian telescope, both of which are ground-based observatories in Australia. However, it is best known from the photographs that the Hubble Space Telescope acquired in the 1990s. These images provide additional details about the composition of the galaxy. And in the same way that the Webb telescope was able to uncover the existence of even more remote galaxies in July, the photographs that it took of the Cartwheel galaxy were able to magnify the intricate formation of stars within the galaxy's rings as well as the dozens of other star systems that lay beyond them.

The collision of two galaxies that took place hundreds of millions of years ago is responsible for giving Cartwheel its distinctive shape. According to Marcia Rieke, the principal investigator of the near-infrared camera, or NIRCam, which is one of the scientific instruments that make up the Webb telescope, "We guess that the Cartwheel probably started out looking something like the Milky Way, and then this other galaxy moved through." On the other hand, the smaller galaxy did not get trapped in the bigger spiral it pierced; rather, it proceeded forward and moved farther away from the larger galaxy. In the photograph that NASA shared, there is no indication of its presence.

Kirk Borne, who was the principal investigator for the Hubble observation of the Cartwheel but was not involved with the Webb, stated that the galaxy's peculiar shape, which formed by coincidence during the merger, has inspired astronomers to study it for decades. In the depths of space, it is not unusual for galaxies to collide with one another; yet, it is unusual for these collisions to result in such a flawless form that piques human interest. Borne was not involved with the Webb.

"The effect of this other galaxy's gravitational field that modified the orbits of stars in the original Cartwheel galaxy was what changed the form of the Cartwheel," Dr. Rieke said. "This other galaxy changed the shape of the Cartwheel." it was less disruptive to the form of each galaxy, and both were reasonably able to keep their uniqueness as a result of the collision between a smaller galaxy and a bigger one, which took place directly through the centre of the larger galaxy.

Dr. Borne, who has researched many previous instances in which galaxies have collided, likened the smaller galaxy to a bullet that has passed through the larger galaxy. In the 1990s, when scientists observed the extraterrestrial object, they found a trail of hydrogen gas that had been left behind and was following the smaller galaxy. This trail, which Dr. Borne referred to as the "smoking gun," indicated that the object had continued to move after creating Cartwheel's new formation.

Even though it is now 1.5 times the size of the Milky Way, the Cartwheel galaxy continues to grow, and new stars are being produced within its outer ring and at the galaxy's edge. However, there is no definitive answer to the question of how big Cartwheel will become when it stops expanding or what form it will take when it does cease growing.

Although the photographs of Cartwheel had been obtained by July 12, they were not made accessible to the general public until this week. They have been filtered to make them easier on the eyes, bringing out the bright, blue-hued young stars, the red-toned molecules that come from the older stars, and the space dust that floats in between the rings. Joseph DePasquale, a senior scientific graphics developer at the Space Telescope Science Institute, which controls the Webb and Hubble satellites, stressed that the stars and dust are really detected as infrared radiation rather than colors, even though the image looks multicolored.

Webb's unique technology to detect that light in such exquisite detail sets its photographs apart from those that Hubble and the Anglo-Australian telescope have produced in the past. Even while Hubble had a certain ability to capture light in the infrared spectrum, the ones that Webb has are far more sophisticated and provide images with a more vivid color palette. The NIRCam, for example, which was built over an 11-year period by roughly 25 people working with Dr. Rieke, can distinguish between the infrared colors of stars that the human eye cannot see.

When Hubble took a picture of Cartwheel in the 1990s, the "spokes" of the galaxy were shrouded by gas clouds that dispersed light, which made it difficult to discern the thousands of stars developing inside the galaxy. Now, because of the Webb telescope's ability to study wavelengths of light that are both mid- and near-infrared, it is possible to see through space dust. This helps to corroborate some of the ideas about Cartwheel's composition that were developed using Hubble's equipment and uncovers new information, such as the fact that there is no star formation in certain locations between the spokes of the wheel.