The U.S. Stock Market has Seen $6 Trillion in Wealth Erased Due to Coronavirus 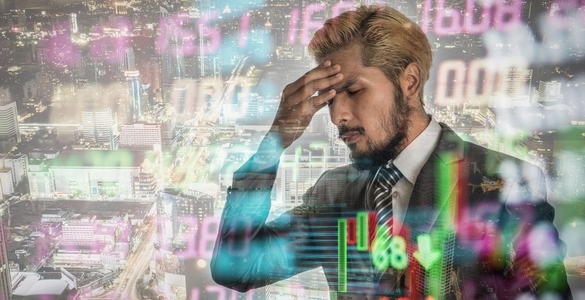 Most Americans don’t own stock, and less than half of families have retirement accounts. The effect of having another $6 Trillion market value evaporate, of the S&P Dow Jones Indices, will have a huge physiological impact on Americans.

When all was said and done, the S&P 500 had suffered its worst week since the financial crisis - October 2008. The drubbing erased more than $6 trillion in market value in just five days, according to S&P Dow Jones Indices. Those who remember what happened 12 weeks after in early 2009 give or take a few weeks, can attest to the fact that that second stock market panic inflicted much more pain.

Analysts pointed out that it was a crisis caused by an undercapitalized banking system. The fact is the banking system underlying the second largest economy in the world could be weeks even days away from illiquidity.

On Thursday, the S&P 500 posted its fastest correction - defined as a 10% drop from its recent peak - since the Great Depression. The coronavirus has spread to over 55 countries beyond its point of origin in China, infecting over 83,000 people around the world. Here in the United States, some of the most respected and knowledgeable epidemiologists are pointing out that Italy was thought to have just 17 infected patients and in just seven days saw that number climb to 1,000.

No matter how much the president repeats his lie that only 15 people are infected with one fatality and that this isn’t a threat to most Americans, the likely hood that the official count in the U.S is likely to follow the exponential growth Italy is suffering, and our number of cases are just starting to be counted.

The sell-off in the U.S. stock market was fueled by concerns that efforts to contain the virus could stymie economic growth and cut corporate profits. We at Wall Street Rebel think these concerns will multiply next week, and we are likely to be only halfway through this stock market crash.

The end of a very rough week for U.S. markets brought a worrying prediction from Nouriel Roubini, a New York University business professor and market prognosticator. While several respected economists and Wall Street firms are now warning that global coronavirus outbreak could be “worse than the financial crisis” of 2008/09 and lead to a major global recession.

Nouriel Roubini predicted during an interview with Der Spiegel released this weekend, the coronavirus epidemic could be worse than investors, and professional stock analysts believe at this point. He is predicting “global equities to tank by 30 to 40 percent this year.”

Roubini in Der Spiegel said people “prefer to believe in miracles,” (not necessarily referencing President Trump’s prediction the coronavirus will “disappear ... like a miracle.) and don’t realize the “simple math” that tells us that realistically, a squeezed Chinese economy will mean downturns around the globe. “This crisis will spill over and result in a disaster.”

Roubini, who is often nicknamed Dr. Doom for his frequent pessimistic predictions, also saw doom and gloom for Trump’s future as president as a result of any economic crises that are unfolding. Asked by Der Spiegel about President Trump’s prospects for re-election, Roubini said he would likely try to benefit politically from the outbreak, but “will lose the election, that’s for sure.”

“The Democratic field is poor, but Trump is dead. Quote me on that!”

Though the week just saw a 3,500-point drop for the Dow Jones Industrial Average, Roubini warned: “It is far from being over,” which echoes my warning in World Opportunity Investor, and Geoff Garbacz in Gold and Energy Options Trader.  Our Erlanger Chart Room charts are telling us we are only halfway through the nose-dive on Wall Street.