The US Government Under Financial Siege Scrooge Stays in Washington. 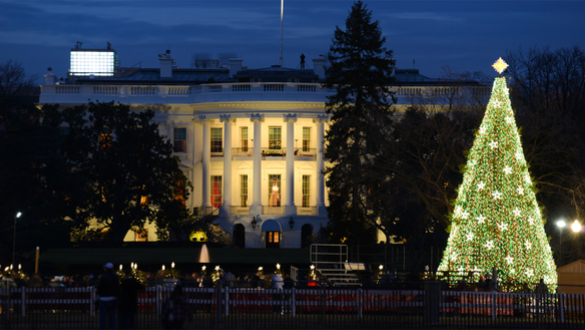 FLOTUS is flying back from Mara-Largo to spend Christmas with POTUS. Even Trump won’t risk playing golf with paycheck deprived Secret Service Agents in tow while vital parts of the government are shut down.

President Trump threw in the towel today on any hope of getting in any golf in at least until after Christmas. I have to hand it to him. I expected based on his erratic behavior of late that he would allow the government to shut down among other things the Homeland Security and still get on his Boeing and spend 16 days his Mara-largo and West Palm Golf Club.

Even as befuddled and under siege as he has been, the resignation of Secretary of Defense James “Mad Dog” Mattis, Trump knew if he were caught on camera while 800,000 federal employees sat in limbo wondering if they would get paid next week, it would be disastrous and his impeachment would become imminent.

Trump had agreed to a Congressional Resolution to keep the government open with the House and Senate leaders and then was overcome with fear when the cynical, racist, white nationalist talking heads on FOX and right-wing talk radio cranked up their volume.  Lacking the basic good sense possessed by the “acting White House Chief of Staff” Mick Mulvaney who described the wall as a childish solution for a complex issue during the 2016 campaign.

We have satellites capable grabbing a photo of a person approaching the border and instantly sending it to border patrol with their exact coordinates and President Trump and the likes of Anne Coulter and Russ Limbaugh want a U.S. version of the 13 century Great Wall Of China. Meanwhile I’m still waiting for the infrastructure funding for repair of our roads, bridges, airports and the linkage of high speed rail from our biggest cities to the modest cities in the Midwest and West that could supercharge economic growth to 4% a year and eliminate chronic unemployment in America for at least a 100 years.

Amazingly, the Democrats are willing to allocate up to $25 billion for modern cutting edge border security and expertly trained personnel — their price for immigration reform passed by the Senate already, DACA and no more throwing children in cages and violating our treaties.

So, Trump sits in Washington, D.C. waiting for Nancy, Chuck and Democrats to cave in and pay $5.7 for the Wall that Mexico was going to pay; at least in Trump’s mind.  Meanwhile, all of Trump’s scandals and rancor has hit the  U.S. equity markets like a hammer and have already either been driven into bearish territory or to the verge of bearish territory.

I have stated in my last commentaries that the Dow Jones could wind up retesting support at 20,500 before New Year’s. That would amount to a 6,496 point, a 31% decline from the peak of the Trump rally.

Not since the depths of the Depression 1931 have we seen this kind of carnage. Make no mistake this is the “Black Swan” I have repeatedly been warning was coming.

This reality demands consideration of the biggest additional threat ahead. Which is the growing likelihood Vladimir Putin will have the audacity to use that huge military buildup along Russia’s border of Ukraine to invade and take it?

Putin now has a pretty good idea Trump will do absolutely nothing if he invades an annexes Ukraine. A 100,000, 500,000 slaughtered won’t cause President Trump a minute of sleep.

After his abandoning our Kurdish allies in the fight against ISIS this week, triggering ‘Mad-Dog’s’ resignation, Putin has to know his annexation of Ukraine is guaranteed to be successful.

If this nightmare for Ukraine happens; the Dow Jones, S&P and Russell will be driven to their most oversold condition in history by panicked investors.

A little secret, if you know what you’re doing and this frenetic panic occurs, and this oversold extreme takes place every $10,000 you leverage, could easily become $250,000 in 2019. People can get insanely rich during these deeply oversold positions. So while the trouble could be nightmarish in 2019, the year ahead could offer such an extreme a rally of 15% even 20% after a devastating 2018 is possible.  A move like that in just a few months off a bottom is a rare opportunity to profit.