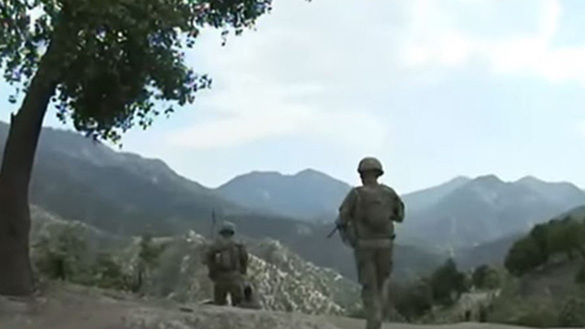 In the two decades since September 11, 2001, the United States spent more than $2 trillion on the war in Afghanistan. That's $300 million per day, every day, for twenty years. Or $50,000 for each of Afghanistan's 40 million people.

This was one of history's delicious absurdities in the grand tradition of geopolitical nonsense-- pioneered by Alexander the Great when he Invaded Afghanistan hoping to find the headwaters of the Nile. This classic example of nonsense was made more embarrassing by the fact that Aristotle endorsed it.

Alexander paid a high price in casualties for his Afghan adventures. In exhausting fighting with stubborn tribesmen (much of which took place in modern-day Uzbekistan and Tajikistan), Alexander lost almost as many men in one bloody day as he had in the four years it took him to conquer all the lands between the Mediterranean Sea and eastern Persia (Iran).

Of course, that casualty comparison is somewhat misleading as Mazaeus, the Persian satrap of Egypt, surrendered to Alexander after he captured Gaza more or less without a fight. Afghan tribesmen were not awed by Alexander's reputation as a military genius as Mazaeus was. For one thing, they had never heard of him.

While venturing into Afghanistan, Alexander was shot in the leg with an arrow by an Afghan tribesman and nearly lost his life.

Notwithstanding the high price of blood Alexander paid, he succeeded in conquering Afghanistan. Although his expedition through Afghanistan was brief, Alexander left behind a Hellenic rule that lasted for more than a century and cultural influence that lasted several centuries.

If you have followed the news from Afghanistan, you will recognize several modern Afghan cities that were originally named named "Alexandria," including Alexandria-of-the-Arians (modern-day Herat); Alexandria-on-the-Tarnak (Kandahar); Alexandria-ad-Caucasum (near Begram, at Bordj-i-Abdullah); and finally, Alexandria-Eschate (near Kojend), in the north.

After Alexander's pre-mature death from mysterious causes in the Palace of Nebuchadnezzar II in Babylon at age 32, his sprawling empire was divided. (Dr. Katherine Hall, the senior lecturer at the Dunedin School of Medicine in New Zealand, suggests that Alexander suffered Guillain-Barre Syndrome (GBS), caused by an infection of Campylobacter pylori, a common infection bacterium of his time).

Seleucus, commander of Alexander's infantry forces,  emerged from the Wars of the Diadochi (wars of Alexander's successors) to declare himself ruler of his own Seleucid Empire, including present-day Afghanistan.

Seleucus was perhaps the most militarily successful and politically shrewd of Alexander's successors. While he consolidated some territories in the far east, he traded Alexander's Afghan territories south of the Hindu Kush to Indian potentate Chandragupta Maurya in exchange for 500 elephants and marriage with one of his daughters.

When Seleucus arrived in Macedonia in 281 BC, intending to add the European homeland to his empire (and apparently retire there), Ptolemy II Ceraunus, the eldest son of Ptolemy I Soter.

Rulers of Greek descent continued to hold sway over portions of Afghanistan until 10 CE. The and-Greeks had been in steady decline after the reign of Menander I ended in 130 BC. Menander was an avid patron of the Buddhist faith. He encouraged the spread of Buddhism in Afghanistan, where the prevalent religion had been Zoroastrianism. (The Zoroastrian scriptures were written in Avesta, an early version of the Afghan language Pashto).

The Zoroastrian tradition has been eclipsed in active worship but is still fossilized in some calendar names. There are thought to be some 200 practicing Zoroastrians in Afghanistan and about 50 Hindus.

This represents a drastic decline in the number of Hindu believers. As recently as the end of the 19th century, a whole province of Northeastern Afghanistan (Nuristan), then known as "Kafiristan" (land of the infidels), resolutely resisted conversion to Islam. The Afghan monarch, Emir Abdur Rahman Khan, invaded Kafirstan and forcibly converted the Kafirs to Islam.

Even a casual review of Afghan history offers scant support for optimism that it could quickly be occupied or subdued.

When the Mongols arrived in Afghanistan, they faced so much resistance in the Bamiyan valley, which they besieged in 1221, that the grandson of Genghis Khan was killed there. The Mongols killed most of the valley's original inhabitants in a fury: most of the modern Hazara who live there are descendants of Mongol soldiers who married local women.

The well-founded concern that the Taliban victory will culminate in more oppression of women. as happened in the last episode of Taliban, harks back to the Afghan Civil War of 1928 to 1929.

At that time, hardline Islamists known as Saqqawist forces rebelled again the rule of King Amanullah Khan. He excited the ire of the more reactionary Islamists by instituting reforms to permit the education of women and allow them to work.

King Amanullah sought to consciously imitate Kemal Ataturk's reforms in Turkey, requiring Western dress in Kabul and other cities and permitting women to appear unveiled in public. This infuriated the Saqqawists.

The rebellion against King Amanullah succeeded. He abdicated the throne on January 14, 1929. His abdication dissolved his various reforms, re-instating the oppression of women and dashing the hopes of haberdashers in Kabul of enjoying a windfall business.

In 1978, the Communist government, led by Nur Muhammad Taraki, gave equal rights to women. This was a major cause of discontent that stimulated open rebellion.

With the Communist regime deeply unpopular, the Soviet Union sent in an army to prop up its Afghan allies.

The Soviet war in Afghanistan lasted more than nine years. It took the lives of 15,000 Soviet soldiers and hundreds of thousands of Afghan civilians and turned millions of Afghans into refugees.

The US occupation has lasted twice as long. Withdrawal will not enhance US stature in the world. It probably augurs ill for the future of Afghan women under Taliban rule.

And of course, the US occupation of Afghanistan has come no closer than did Alexander the Great to identifying the headwaters of the Nile.

That wasn't the only thing we failed to find. We never found Afghanistan itself. We went there hoping to mold an Afghan nation-state into an acceptable semblance of a modern nation. We didn't come close. Afghanistan is little more than a blank spot on a map. — a hodgepodge of tribes and ethnicities keeping company with a few defacto city-states, like Kabul and Kandahar, And of course, complicating the picture is the ever-present mischief orchestrated by Pakistan's intelligence service, the ISI that we subsidize to thwart our policies in that part of the world.

But there is good news. Apart from the considerable evacuation costs, US spending in Afghanistan will now come to a halt. That implies a savings of about $45 billion for the balance of the year. The Taliban's entire annual budget comes to a mere $100 million. It will be interesting to see whether they can afford to have decisively captured the black hole on the map known as Afghanistan.