THE TRUTH ABOUT TAXES; THE GOOD, THE BAD & THE UGLY 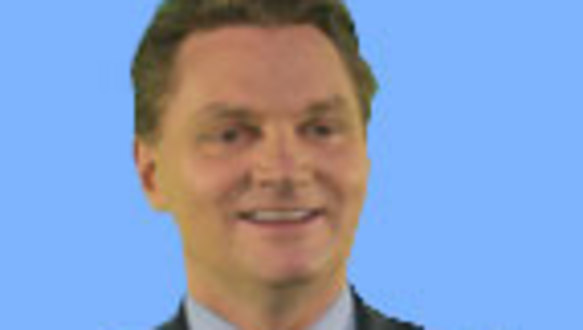 But what is the truth? What do the numbers really say? And can we change the tax code to really improve the nation’s financial future, on either side – reducing the debt or increasing entitlements? The answer to this important question may well forecast whether or not the United States will survive as a free republic.

There are fundamental philosophical questions to income taxes that separate people; to some people income taxes are a necessary tool to fund the operations of government, to others income taxes are a way to penalize behavior they deem to be greedy or otherwise unsavory. Regardless of your particular political direction, income taxes and all affiliated taxes have continued to grow in real amounts almost since their inception in the early 1900’s following the adoption of the 16th Amendment in 1913.

The history is interesting of course but this article is written to look at today, where are we today? We hear about the 1% all the time from the left and we hear about the over 50% taxation by the right. But whose right? Here are the facts. Income taxes are in the form of federal income taxes, state income taxes, Medicare tax and social security all adjusted for various deductions. Without showing tax tables, here are the total taxes broken down by a single individual earning a w-2 income.

What can we learn from these numbers? First let it be said that the lower rates are OVERSTATED as this table does not include things like the “earned income tax credit” that actually can be used to eliminate federal income taxes up to about $50,000 per year AND slightly understated at the high end due to deduction phase out limits, but with that aside, this shows clearly that we have a highly progressive tax system in place right now (that should appease the left) and we have not yet taken over 50% (which should I guess appease the right).

The result of this tax scheme together with all other federal taxes has been to raise around $2.3 trillion per year in revenues for the federal government, far short of the over $3.0 trillion we spend. The problem policy makers have (and that means ultimately the voters) is that the bulk of the national INCOME is held in the middle income from $30,000 to $100,000. That’s where the vast majority of people exist!

So by raising the marginal rate on people let’s say over $1,000,000 from 39.6% to 41.6% (a 2% increase), it might feel good because you’ve increased the progressivity of the tax rates but that would do nothing to raise revenues. To raise enough revenues to balance the budget, let alone add more freebies like college would require significant increases in the MIDDLE and LOWER MIDDLE of the income spectrum.

The politicians and political activists who beef and moan about income disparity and the top 1% are missing the boat. The disparity is not generated through income but through wealth. In that there is a disparity. According to this graph from the Economic Policy Institute, 75% of all wealth is owned by the top 5%, far more than their share of the population. 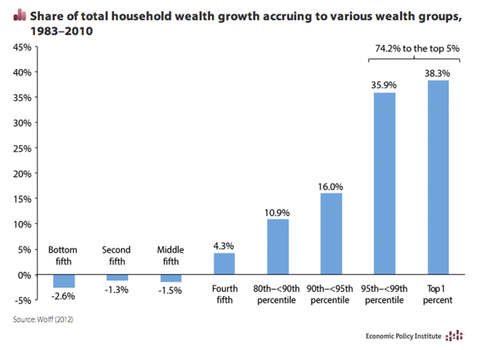 This disparity may “look bad” but in reality it is a natural progression and is exacerbated by policies on the part of federal and state lawmakers that make it increasingly difficult for small and medium size businesses to thrive and rewarding large institutions for making business decisions that support government itself (i.e. Goldman Sachs).

When the Federal Reserve for example initiates a Zero Interest Rate Policy (or ZIRP) the natural result is that money flows into the stock market thereby raising values. This makes shareholders wealthier at a faster rate than the people who don’t own stocks thereby increasing the wealth disparity. While this may emotionally upset some people and cause them to respond by trying to raise taxes on investment, that is ultimately counter-productive.

First it must be understood that “wealth” is measured in effect by “savings”, that is money you’ve put aside after you’ve earned it and been taxed on it. So when you invest savings, you hope to make it grow by investing in enterprises that you deem to be likely to succeed. That investment is what fuels the growth in the economy. So while it may look bad to have some people earning more from their investments, we should relish that and hope that all people become “investors”. That is the road to wealth!

The bottom line is that the current tax scheme doesn’t raise enough money to cover current expenditures. Many “fixes” are proposed the most often talked about is raising the current $110,000 cap on Social Security payments to make people contribute that 6% on income all the way up. The problem with that is simply that Social Security is an INSURANCE program whereby individuals are promised a return both OF their money and a return ON their money.

So if we take the cap off and tax people all the way up, they’ll just be getting more out of the system so while it will help in the near term, long term it doesn’t really solve things. The only real way to make Social Security permanently solvent is to a) implement policies that generate economic growth and b) increase the retirement age for future generations to better match life expectancy.

In terms of solving the balance of the federal deficit, there are two obvious components; cut where you can although an increasingly large amount of the budget is no able to be cut; interest payments; Medicare, Medicaid and Social Security so the other side, raising revenues must be considered. The best way to raise government revenues is to have a growing economy. The issue that must be understood is that raising taxes is the opposite of what it takes to generate a growing economy. But that is an issue for another article.

So taxes are indeed quite progressive in the United States and can approach 50% of a person’s income. Further, the complexity of the code itself has hidden costs that add to this burden like the cost of accounting resources to comply with the onerous code. As the United States continues its 21st-century journey, policy makers will be forced to reconcile the spending as ultimately one cannot borrow themselves to prosperity. There is time to make adjustment, but that time is slipping away.