The Popularity of Fake Meat Made from Plants Has Faded 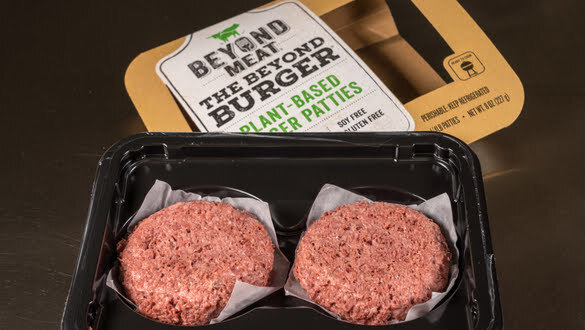 There is worry in the plant-based meat market as a result of Beyond Meat's challenges. The plant-based meat economy was flourishing a few years ago. The rate of this growth has decreased, which has led some to wonder whether saturation has been reached.

The popularity of plant-based meats seems to be on the decline.

According to Bloomberg, sales have been decreasing after earlier enjoying double-digit growth for a period of time. This may be because the market in the United States has been saturated.

"According to information provided by Information Resources Inc., or IRI, the volume of sales of refrigerated meat substitutes sold in retail establishments decreased by 10.5% for the 52 weeks that ended on September 4, 2022. Jonna Parker, a fresh food expert at a market research company, says that the main reason for the drop is that prices have gone up, but that's not the only reason.

It seemed for a time as if Beyond Meat was going to conquer the whole planet.

As more interested customers tried Beyond Meat's vegan offerings, the company's sales in supermarket stores increased dramatically throughout the epidemic. Its imitation burgers and sausages were appearing on the dinner tables of people living all throughout the United States and on the menus of fast food restaurants such as Subway, Carl's Jr., and Starbucks. When the firm went public in 2019, investors speculated that the vegetarian movement was finally having its time, which led to the company's shares skyrocketing.

However, Beyond Meat has lost some of its lusters in recent years.

At the beginning of August, Beyond Meat announced that their net sales for the second quarter of 2022 were $147 million, which is a 1.6% decrease compared to the $149.4 million in net revenues recorded for the same time in the previous year. According to the company's report, the amount of money it lost on the net during the second quarter of 2022 increased to $97.1 million from the amount it lost during the same quarter in 2021, which was $19.7 million. Over the last year, its share price has dropped by over 83 percent.

This year, McDonald's brought an experiment with a burger called the McPlant to a close. The burger was prepared using a patty from Beyond Meat, but the fast food chain has no intention of adding it to the menu permanently. The business had anticipated that sales would increase by as much as 33 percent this year; however, it is now probable that just a slight increase will occur.

Late in October, the firm announced that it will be terminating the employment of two hundred workers, representing 19 percent of its total workforce. In addition, four of the company's top executives have left their positions in the past few months. These executives include the chief financial officer, supply chain officer, and operating officer. Beyond Meat suspended the latter executive following his arrest on allegations that he bit another man's nose during an altercation that took place in a parking garage.

Investors and others are also arguing whether the difficulties that Beyond Meat is experiencing are unique to the firm or a foreshadowing of more fundamental problems in the plant-based meat sector.

Some people believe that the decrease in sales is due to the rising cost of food since more people opt to buy cheaper animal meat rather than more costly plant-based alternatives. Others, however, speculate that the firms may have simply hit the limit number of customers who are prepared to test or frequently buy fake hamburgers and sausages.

Although inflation was a factor, another contributing factor was a shift away from the belief that plant-based meats are healthier than animal proteins. (The corporations emphasize the positive effects on the environment.) However, researchers from Deloitte said that another issue might be consumers' reluctance to purchase a product that they perceive to be "woke" and associated with ideals that tilt to the political left.

When the restaurant company Cracker Barrel announced on its Facebook page in August that it had started selling the vegetarian "Impossible Sausage," the post was inundated with hundreds of comments from upset customers. "Go awake, go bankrupt," one wrote. You have just lost a significant portion of your base. You clearly have no idea who your customers are.

There is a lack of consistency in the statistics around the category. According to a market research company called IRI, volume sales of refrigerated plant-based meats have decreased by 11.6% over the course of the previous year, with packages of fake ground meat and patties suffering a particularly severe battering. However, volume sales of frozen plant-based meats, which are often sold at lower prices than those kept in the refrigerator, saw a modest decrease. The number of sales of chickenless nuggets and patties saw a significant increase.

In addition, although some companies that produce plant-based meat are having difficulty, others are finding increased demand for their products.

After just two years in business, the Brazilian meatpacking giant JBS announced in October that it would be winding down its plant-based meat company known as Planterra Foods. According to the IRI data, volume sales for the vegetarian meat producer Morningstar Farms, which Kellogg has stated it plans to spin off or potentially sell, fell sharply this year in nearly every category. This comes despite the fact that Kellogg has stated its intention to spin off or sell the company. Kellogg's chief executive, Steven Cahillane, blamed the decline on supply-chain challenges with a co-manufacturer of the items during a call with Wall Street investors in August.

However, Impossible Foods, a privately owned company, said that demand for its goods increased significantly in 2017.

Keely Sulprizio, a spokesperson for Impossible Foods, said in an email that the company is not encountering anything that is comparable to what Beyond Meat has described or to some of the other brands competing in the same market. On the contrary, we see hypergrowth, with year-over-year dollar sales growth in retail alone of over 60 percent.

According to Ms. Sulprizio, "We introduced frozen more recently with a bigger family size, and it has been quite successful with both merchants and customers." Moreover, "we increased the size of the family package."

In a call with analysts from Wall Street at the beginning of November, Ethan Brown, the founder, and chief executive officer of Beyond Meat, stated that an increasing number of plant-based meat players were competing for a smaller group of consumers as consumers traded down to less expensive animal proteins. Brown is the chief executive officer of Beyond Meat. Mr. Brown said that as a consequence of this, "a shakeout does seem to be happening" and that, as a result, "we anticipate additional brands to either retreat or consolidate." Beyond Meat did not want to comment on this piece beyond what was discussed on the call with analysts.

Mr. Brown said that the company was expanding its distribution of some of its frozen products, even though it wanted to boost sales of its refrigerated goods, which had some of the highest profit margins.

Is plant-based meat staying on the menu? | FT Food Revolution