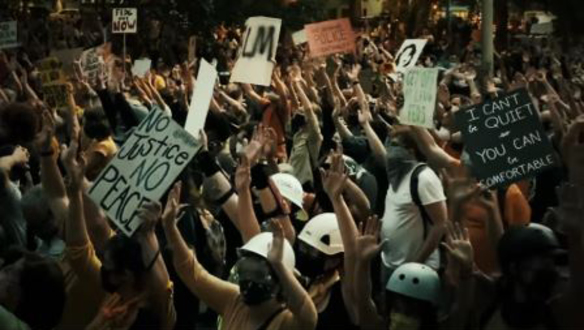 The federal government’s secret army dressed in military assault gear were grabbing protesters off the streets of Portland and pulling them into unmarked vans. It’s the stuff of a dystopian science fiction novel. Portland mom's defiantly stood up to the secret police to defend American citizens Constitutional Rights from Donald J. Trump's latest photo op.

President Trump’s decision to follow up his Lafayette Park attack on peaceful protestors and journalists by doubling down on his authoritarianism has blown up on him big time.  His attempt was part of his campaign strategy to convince voters in suburbia that our country has plummeted back into the riotous chaos of the 1960s.

Sending in secret police to arrest people without warrants or probable cause, literally grabbing people off the streets in unmarked vans Gestapo style, was nothing more than a strategy designed to generate a protestor backlash. Through this strategy, he was able to increase the numbers of protestors dramatically and created the impression that the city of Portland was completely out of control.  Trump presented his creative illusion of mayhem by orchestrating a violent clash between a large number of protestors and the secret police for the sole purpose of television imagery.

The use of tear gas, pepper bullets, concussion grenades, and dumpster fires set in the middle of the night was all created to capture film footage Trump could and has already used in his campaign advertising.

Trump capped it all off with his public declaration that he’s a “law and order President.” If needed, he would send in “50,000 or 60,000” federal secret police into every “Democrat” city to end the chaos he was staging.

The campaign strategy of creating chaos was a cynical attempt to scare the crap out of middle-class suburbia.

As far as Trump is concerned, the more tear gas, mayhem, and chaos caught on film, the better.  The more disturbances created in Portland, the better he could manipulate the imagery he could use on social media and in 60 second TV ads to show he is a strong leader capable of protecting America from what he has described as anarchists and terrorists. It’s a strategy torn for President Nixon’s 1968 campaign that used film footage of the chaotic anti-war protests of that year to sell himself as the “law and order” candidate. Nixon’s message to voters was he was the solution to all the chaos they saw on the newscasts of the time.

The difference, of course, was that Nixon didn’t instigate the violence; he only harnessed the chaos to win the White House.

Seeing Trump’s re-election strategy for what it is, The Lincoln Project figured out how to brilliantly turn this campaign strategy and the video imagery from Portland to reveal the truth behind Trump’s orchestration of the chaos—created by Trump against him in their latest social media/TV campaign commercial.

The commercial below also attacks Trump’s narrative that the protesters were violent, anarchists, or terrorists. It reveals the protesters included mom’s willingness to stand between Trump’s secret police and the growing numbers of peaceful protestors demanding that gratuitous police violence against black Americans comes to an end.