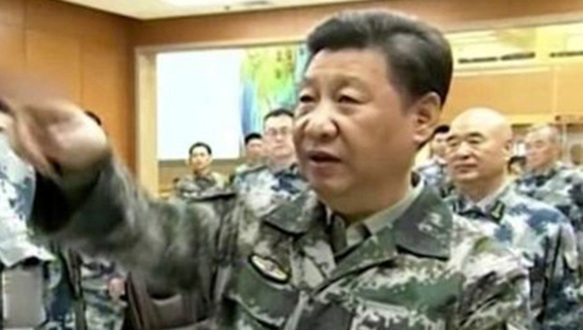 Instead of Trading Goods and Services China and the United States Could End Up Exchanging Dozens of Nuclear Tipped Missiles.

President Trump launched a U.S. China trade war this past Friday imposing tariffs on $34 billion in Chinese products has led as promised to China slapping tariffs immediately on an equal amount of U.S. products. President Trump has warned that if China retaliated against its imposition of tariffs on its imports into the United States – he would impose up to $500 billion on additional Chinese products.

An escalating trade ware could however get much worse very quickly. We’re at risk of seeing U.S.- China relations so deteriorate so rapidly that this turning into a war between two nuclear armed superpowers. China could embargo Taiwan and take such a hostile stance to U.S. Naval operation in the South China Sea that massive causalities lead to a nuclear war that kills millions in Asia and the United States.

Trump Administration officials’ are privately scorn the idea of this trade war could escalate into a nuclear war. However, in recent weeks Sino/U.S. relations have deteriorated from looking like a mutually respectful partnership into what looks like a fight between mortal enemies looking to gain any advantage they can over the other, thus pushing China and the United States into a very dark and dangerous place.

The sudden North Korean pull back from its stated intention of denuclearization could very well be a message from the Chinese that if the United States continues its trade war it may find that China is unwilling to back any U.S. effort to help negotiate a North Korean disarmament effort.

The United States and China are already in the grips of military stand-offs, territorial disputes, as allies and partners of both nations are also squaring off on cyber security, with hacks by China military intelligence services taking place daily. The danger isn’t another cold war between the United States and China but instead a hot war that rapidly gets out of control, with neither country willing to back down.

Meanwhile Russia is doing everything it can to undermine the United States and to cause trouble in every hot spot around the world. Russia is eager to see China challenge American power on the world stage so as to improve Putin’s hand going forward.

The Trump administration new tariffs on $34 billion in on Chinese goods amount to a 25%  tariffs that are being added to imports of like X-ray machine parts, water boilers, airplane tires and industrial parts. While China has focused on U.S. products such as soybeans, electric cars, pork and other products exported by red-states.

President Trump despite warnings from respected economists’ seems to be completely itching for this trade war to get underway.

A senior Trump administration official was quoted on Friday as saying …

“We are ready for a trade war. If they want it we are ready to fight it. They need to remember America would win that so-called war, hands-down. Our market is bigger, our consumers richer – we are the global innovator. All we ask is for an even playing field from the Chinese. If they won’t agree to that, then they will have to deal with the consequences.”

“China will pay a price. We will impose costs on them. They need to be ready for that. We are.”

China does stand to lose out on a big portion of the $462 billion in goods and services America imports from that nation if this trade war continues to escalate. A serious economic issue given the Chinese economy is showing signs of already slowing down. Yet, it’s also true, U.S. consumers and businesses would be serious hurt if this conflict blows up in full-blown trade war.

Foreign affairs experts are warning Trump is playing a dangerous game risking exaggerating seismic shift in international affairs driving China into an even closer relationship with Russian and other nations that are becoming increasingly hostile to the Trump Administration.

Meanwhile, China over the last few years has been pushing claims that seek to turn the waters around its coasts into its own sovereign territory. From the East China Sea all the way to South China Sea, Beijing is determined to ensure that is the master of the seas – and push Washington out of the region for good. Using this trade war as an excuse could flex its military and naval muscles in an attempt to embarrass President Trump.

Beijing has made huge and key investments in its military and naval forces to literally win any war with the United States in the pacific. The centerpiece of China’s upgrades can be found in its missile arsenal which is second to none, and is of such a size that U.S. missile defenses would be overwhelmed many times over according to many of the most informed military observers..

Not only does China have the ability to destroy all of the United States’ military bases around the pacific region,  as well as the ability to sink U.S. warships as far out as Guam. China has treaty commitments with Russia –that could put the United States in a position that it becomes out gunned and unable to counter Beijing’s strategic military strength.