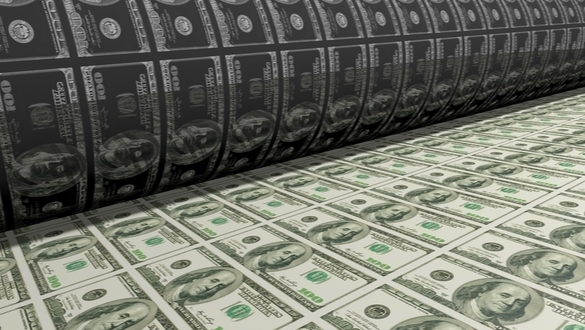 The Federal Reserve’s independence continues to fall in question as it's New York arm added $83.1 billion in “temporary liquidity” to financial markets Thursday. Further, there are no signs of the U.S. central bank stopping its pumping cash for the foreseeable future.

Unless you have been living under a rock this year, you know that the stock market's 30% gain in 2019 was propelled in no small way by the U.S. Federal Reserve decision to cut U.S. interest rates three times and inject more than $1 trillion of temporary financing into the repo market. It also added more than $400 billion to its balance sheet in the fourth quarter. This all took place as President Trump demanded the lower interest rates and added liquidity which drew criticism that the Federal Reserve has lost its independence.

The likelihood of this reckless Federal Reserve monetary and interest rate policy was confirmed by Federal Reserve’s vice chair Richard Clarida who told the Council on Foreign Relations Thursday that the Fed was prepared to continue adding to its balance sheet and providing liquidity to the repo market "at least through April."

Clarida told reporters, after the event, he was not concerned markets could be taking advantage of the so-called "Powell put." The belief that the Fed and Chair Jerome Powell are using the cash to stimulate the economy or that they will cut rates to juice the stock market if prices fall significantly.

"We realize that sometimes we’ll be criticized for it, but it’s not a factor driving our decisions,

"We have a very clear mandate, and are focused on what we need to do."

Clarida's speech was "music to the ears of stock investors and traders who have profitably ridden a liquidity-driven rally that has allowed them to quickly overcome a set of shocks, including the latest one, the sudden escalation of the United States-Iran conflict,"

Many economists are worried the Federal Reserve is sub coming to political pressure from President Trump who is relying on the U.S. stock market to continue to make new highs to help his effort to be re-elected.

Priya Misra, head of global rates strategy at TD Securities, a primary dealer that does business directly with the Fed, told Axios she expects…

“The central bank to add $100 billion–$200 billion more in reserves and continue its Treasury bill buying through July to about $500 billion”.

In a note to Priya Misra clients, she said she expects the Fed's balance sheet to move above $4.4 trillion this year, near its all-time high. This could create the kind of bubble that makes the one we saw a pop in 2008/2009 look like a day at the beach.