The End of Civilization as We Know It 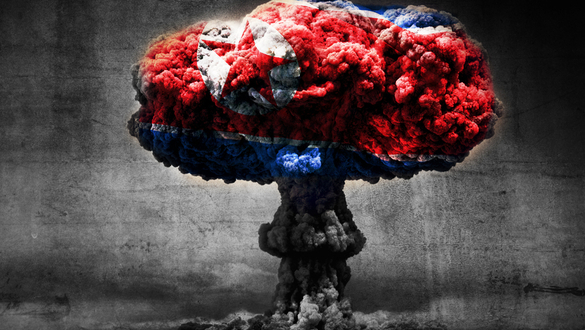 Putin’s use of even a small-yield tactical nuclear bomb in Ukraine would likely put the United States in a no-win position. The main stock indexes are likely to fall.

The bungled withdrawal of the United States from Afghanistan has come back to haunt us and the entire globe. In contrast to Ukrainian President Volodymyr Zelensky, Ashraf Ghani, the puppet Afghan president who fled Kabul shortly as the Taliban closed in on the capital, lacked the same tenacity. Neither Ghani nor Zelensky had the foresight to remark, “I don’t need a ride; I need additional ammo,” as Zelensky did.

Ghani, of course, had an explanation for his cowardice on his lips. He said he scuppered the operation to save Kabul. “There was a real threat of a cataclysmic battle between them devastating the five-million-person metropolis and inflicting havoc on its residents,” says the author.

Even Ashraf Ghani’s vice president, Amrullah Saleh, was unconvinced by the president’s statement, which he described as “disgraceful.”

According to Zelensky, the Ukrainian capital of Kyiv, with a population of 2.8 million people, may have said something as awful about the city. He, on the other hand, did not. He changed out of his business suit and into military fatigues to demonstrate that he was prepared to put his life on the line the way he had urged Ukrainian troops to do.

Since 2014, when Zelensky stood up to Putin, Ukraine has received a total of $6.4 billion in military assistance from the United States. More than 360 times the amount of money the United States spent on Ukraine at the time. Meanwhile, according to the Watson Institute at Brown University, the cumulative cost of the war in Afghanistan for the United States is $2.313 trillion.

In other words, the Afghan presidents had been on the payroll of the United States for so long and received so much money that they had effectively become our castrated puppets. Zelensky, on the other hand, was a Ukrainian television star who was not a puppet of the United States. He was chosen as the country’s new president due to his popularity. During his role as a Ukrainian high school teacher, his diatribe against government corruption went viral on social media. As a result of Zelensky’s election as President of Ukraine, a “life follows art” moment occurred.

In my opinion, Ghani’s ability to develop some leadership credentials against the Taliban would have required far more courage on the part of Zelensky to stand up to Russia.

For whatever reason, it didn’t occur to Ghani to say anything like: “When the Taliban comes for us, they will see our faces, not our backs.” The United States has bred puppets that are as insincere as we are.

“The key question we have to address in an honest and clear-eyed approach is: why weren’t the troops we trained, equipped, and backed for so many years able to stand up to the Taliban in a stronger and better way than they did?” said NATO Secretary-General Jen Stoltenberg.

It is a characteristic of empires in decline that what Edward Gibbon referred to as “public bravery” curdles and crumbles to the ground. In The Decline and Fall of the Roman Empire, Gibbons presents this perspective on individuals who have been seduced by riches and have abandoned “the masculine spirit of freedom.”

‘It was inconceivable that contemporary eyes would discover the underlying origins of disintegration and corruption in the public felicity,’ says the author. This protracted period of peace and the Romans’ continued leadership allowed a slow and secret poison to seep into the empire’s essential organs. Men’s minds were gradually brought to the same level as women’s brains, the spark of brilliance was extinguished, and even the military spirit was extinguished over time. The original peoples of Europe were tenacious and fearless warriors.

Spain, Gaul, Britain, and Illyricum provided the legions with superb soldiers, and these countries were the actual power of the monarchy. It was still possible to have personal courage. Still, they lacked the public courage that comes from a love of independence, a sense of national honor, the presence of risk, and the habit of being a leader in the community. They were granted laws and governors at the whim of their monarch, and they were defended by a mercenary army hired by the emperor. The descendants of their fiercest leaders were thrilled with their newfound position as citizens and subjects in the United Kingdom. Meanwhile, the most aspiring spirits turned to the emperors’ court or standard, and the abandoned provinces, deprived of political power or union, sunk insensibly into the laziness of private life.

Violence, death, and economic collapse are all part of the picture.

When our puppet administration in Afghanistan collapsed, we witnessed the symptoms of a “slow and covert poison” that was slowly but steadily making its way through the “vitals of the empire.” Notably, the shameful cowardice of Afghan President Ashraf Ghani was the most egregious manifestation of this.

In our search for hints about our future, we are disappointed to discover that late antiquity was marked by bloodshed, death, and economic collapse, as we have seen in the past. See, for example, Bryan Ward-Perkins’ 2005 book, The Fall of Rome and the End of Civilization.

For ages, the disastrous end of the Roman Empire in the Western hemisphere has been held up as an example of political ineptitude by historians. At the same time, it might be hailed as proof that technical limits limited the amount of harm that could have been done by the twilight of hegemony in late antiquity, a fact that should be welcomed.

After a millennium and a half, we find ourselves in the dreadful position where technology has created the possibility that the Twilight of American hegemony could result in “violence, death, and economic collapse” on a scale that might mean the “end of Civilization” as we know it.

Vladimir Putin is a more grotesque figure than Odoacer, the leader of the Sciri tribe who rose to power and became the first barbarian ruler of Italy in the eighth century. He led his tribe members in an uprising against Orestes, the former secretary of Atilla the Hun, when Orestes ousted the final Western Emperor, Julius Nepos, with which Orestes was a collaborator.

Orestes had broken his pledge to the Sciri tribe chiefs that he would provide them with territory in Italy. However, it should be noted that Odoacer was demanding ownership of one-third of Italy, which was not an entirely reasonable demand.

By the forces under Odoacer’s command, he was declared king on August 23, 476. Orestes was arrested and killed in Placentia (now Piacenza), Italy, five days after he was seized. Odoacer subsequently ousted and banished Orestes’ 14-year-old son, the emperor Romulus Augustulus, due to the coup d'état. The best evidence suggests that young Romulus was offered an extravagant pension of 6,000 gold solidis to go into exile.

Putin is not demanding one-third of Italy, but it remains to be seen if he would accept one-third of Ukraine as a trade-off for the rest of the country. It’s an awful undercurrent to all of this that Putin does have technologies at his disposal that may spell “the end of civilization.”

Russia’s arsenal of 5,977 nuclear warheads as of 2022 could destroy civilization as we know it. And, at the absolute least, if it is deployed in Ukraine, it has the potential to demolish what is left of the global bull market in stock markets.

In my opinion, if Putin were to use even a low-yield tactical nuclear bomb in Ukraine, the United States would be forced into a losing scenario. Most likely, the main indexes would crash and burn. A direct response may result in an all-out nuclear war. But doing nothing would risk emboldening the bully Putin to kill many more innocent people.

And more than happened with the fall of Rome in late antiquity, you really could see “violence, death, and economic collapse” on a scale that could mean the “end of Civilization.”

In Strategic Investment, I only provide an impartial viewpoint. I studied philosophy at Oxford, which the University claims helped me think clearly. Even so, you have the same ability that I have. So only believe what makes sense to you.