The Day “The Rule of Law” Died in the United States 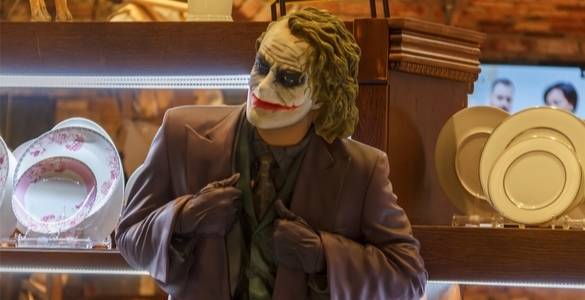 President Trump asserted yesterday that he’s the chief of law enforcement in our United States. His pardons and commutations prove individuals with enough green to hire a public relations representative with enough juice to get on of Trump’s favorite Fox conservative talk shows can get a pardon or commutation of a prison sentence.

This makes the Clinton's renting out of the Lincoln bedroom look like child's play. Trump has proved he can get away with outrageous crimes and abuses of power. He is emulating the “Joker” from the Batman comics.  By getting elected as President of the United States, he has the opportunity of selling political pardons to scores of privileged white criminals that the “Dark Knight, police and prosecutors had put away for a good reason and suddenly setting them free at will as only the “Joker” can.

Anointing himself the ‘Chief Law Enforcement Officer’ of our nation he will soon test if he can get away with having Hillary Clinton, James Comey, Andrew McCabe, Nancy Pelosi, Chuck Schumer, Rachael Maddow, Lawrence McDonald, Chuck Todd, John Bolton, Joe, and Hunter Biden and everyone at CNN arrested if not worse, and charged with treason.  Dare he go after Mike Bloomberg as well?

If the GOP Senate looks the other way at his lawlessness, the first round of arrests will be just the beginning. Trump will begin a Stalinist purge of our country that will lead to hundreds of thousands of arrests and summary executions.  Everyone arrested will be charged with treason.

Anyone paying attention should understand by now there are plenty of Trump devotees who would love to hang, electrocute, strangle and or machine gun any numbers of thousands of Trump’s – “Enemies of the State.”

Yes, the carnage would shock the vast majority of Americans, but it will also terrify them. So much so that less than 10% will protest, speak out and try to stop Trump.

Trump will have tens of millions of allies willing to support his new order. Senator Lindsey Graham will stand behind Trump and blindly justify the arrests.

Many of Trump’s murderous thugs will be turned into elite hunting and relocation troops. Goose stepping in designer special service uniforms. They will become judge, jury, and executioners of Trump critics and they will do everything they can to crush “the resistance.”

If Trump is not stopped, thousands of Americans labeled as members of the resistance will be forced to escape to Canada, Mexico, and South America while day after day hundreds, will be incarcerated or worse. The vast majority of Americans will want to survive these purges and say nothing.

We will know the day Trump caused the rule of law died. It will be the day the mass arrests and detentions begin. That day should be named after Senator Susan Collins. The next day an underground will be born that will struggle to restore our Democracy and the rule of law.

Neal Katyal, who served as acting solicitor general under President Barack Obama, on Tuesday admitted that Trump seems to be able to “get away with everything,” including the latest series of pardons and commutations for his friends and allies.

Katyal, however, believes Trump’s luck will run out and that the “robust tradition of law” in the United States will save our Republic’s Constitutional Democracy.” According to an interview, Katyal gave on MSNBC….

“But I have news for him: The law is going to come after him.”

“What he is doing is lawless, it’s unprecedented, it breaks every rule in our constitutional democracy, and the law will find a way to catch up with him. He can pardon his Mar-a-Lago friends, and pardon his campaign contributors, and this or that. But one way or another, our system is robust enough between the press and the courts to bring him and his ilk to justice.”

Meanwhile, the Presidential opinion polls are rising for Trump, and the GOP Senate and its members of the House are cowering or are fully cooperating with his attempt to turn our country into a fascist dictatorship.