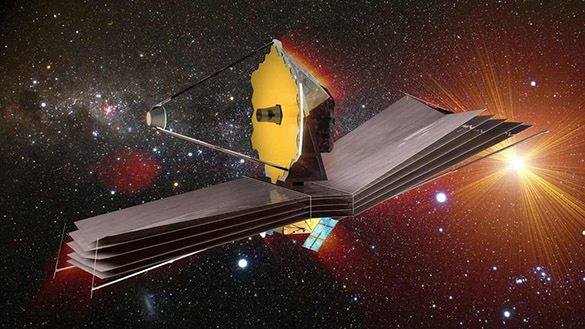 The telescope will be able to see farther into the past than ever before by using infrared light, revealing the first galaxies and stars to form in a newly formed universe.

NASA is preparing its first "Big Reveal" to demonstrate the capabilities of the James Webb Space Telescope. Nasa is releasing the first color images from the observatory before it begins scientific operations to reveal the mysteries of the universe. This long-awaited achievement will pave the way for the remainder of the $10 billion telescope's mission to rework our understanding of how the universe evolved from the earliest galaxies to the present.

After being launched on Christmas morning, the telescope's sunshield and 6.5-meter mirror opened up in space shortly thereafter. The sunshield was roughly the size of a tennis court.

After being deployed around one million miles from Earth, the telescope is now in the process of being commissioned and is prepared to begin scientific studies that have been in the works for decades.

The first images and data collected by NASA's brand-new James Webb Space Telescope will be presented to the public on Tuesday morning.

This will mark the end of roughly thirty years' worth of planning, building, testing, and innovating, which will be followed by a period of six months during which there will be fear, tension, and expectation.

The images are a sightseeing tour of the universe that have been painted in hues that the human eye has never seen before; these colors are the invisible rays of infrared or heat radiation.

Since infrared photons are obscured by the atmosphere, they can only be observed from outside of our solar system in space.

They are capable, among other things, of penetrating the dusty clouds that enclose the cosmic nurseries where stars are born, transforming those clouds into see-through bubbles, and therefore revealing the newborn stars that are cradled inside.

President Biden will reveal the first image at the White House on Monday at 5 p.m in an event that will be streamed on NASA TV or the agency's YouTube channel.

On Tuesday, July 12, at 10:30 a.m. Eastern Time, NASA, the European Space Agency, and the Canadian Space Agency planned to announce the release of the first full-color photos and spectroscopic data from the James Webb Space Telescope.

The unveiling will occur live on NASA TV and online at NASA.gov.

He added that seeing nature reveals its deepest, darkest secrets was very moving.

"We're going to give humanity a new picture of the cosmos," Bill Nelson, the administrator of NASA, said, praising the telescope as "a terrific example of what government can do."

Webb is the most advanced and powerful space telescope ever put into operation.

The Hubble Space Telescope cannot see as far back in time or as far into space as this new telescope will. Its purpose is to investigate the earliest moments of the cosmos when galaxies and stars began forming out of the haze of the Big Bang.

NASA anticipates that the James Webb Space Telescope will define astronomy for a new generation of astronomers, who have been eagerly awaiting their own rendezvous with the cosmos. This is similar to how the Hubble Space Telescope defined astronomy over the past 30 years.

Already, members of the imaging team working on Webb have given glimpses of the capabilities of Webb, suggesting that the upcoming photographs will be something to speak about.

The first image acquired after the space agency and its telescope partners had finished "fine phasing" to align the Optical Telescope Element was made public in April.

Jane Rigby, a NASA Webb operations scientist, noted that the team's selection of the star with the designation 2MASS J17554042+655127 was not based on any scientific considerations.

However, even though the star's light was one hundred times fainter than what the human eye can see, the telescope's sensitivity allowed Webb to view it as if it were the brightest thing in the world.

Then, in the month of May, the Webb science team revealed an image of the Large Magellanic Cloud, which is a satellite galaxy of the Milky Way. This image was used to test the Mid-Infrared Instrument, also known as MIRI, on the telescope.

Both the Infrared Array Camera aboard NASA's now-defunct Spitzer Space Telescope and the Mid-Infrared Instrument aboard the James Webb Space Telescope captured an identical view of the universe. It combined them into the image shown below.

NASA has provided the public with a list of the celestial objects that will be the subject of Webb's initial photographic observations before the big announcement.

An international committee comprising members from NASA, ESA, the Canadian Space Agency, and the Space Telescope Science Institute is credited with selecting the objects, as stated by the space agency.

The images that will be released on Monday and Tuesday were hand-picked by a small team of astronomers and science outreach experts to wow the general public with the capabilities of the new telescope and to blow their minds.

After the release of the images on Tuesday at the Goddard Space Flight Center in Greenbelt, Maryland, there will be a scientific seminar and a rush of professional astronomers to their computers to begin taking and analyzing their own data from scientific observations that began in June. These observations were conducted at the beginning of the month.

In addition, the Southern Ring Nebula, an expanding cloud of gas surrounding a dead star, will be featured in the first data release from the JWST.

Last but not least, the capabilities of the observatory's deep field vision will be put to the test by the compact galaxy group Stephan's Quintet, which can be found in the Pegasus constellation, as well as a galaxy cluster known as SMACX 0723.

The JWST mission managers believe that the telescope has sufficient fuel to continue operations for several decades to come as a direct result of the accurate launch trajectory.

After more than three decades in orbit approximately 500 kilometers above the surface of the Earth, its predecessor, the Hubble Space Telescope, is still in operation.

After the initial photographs were received, NASA astronauts conducted numerous spacewalks to repair a crack in the primary mirror of the Hubble Space Telescope.

Since the James Webb Space Telescope observatory is almost one million miles from Earth, it is impossible to send a maintenance mission there. To our great relief, Webb's very first photographs returned in perfect clarity.