Suspicions of NUKES on the Seabed Near Russian Ship Moskva 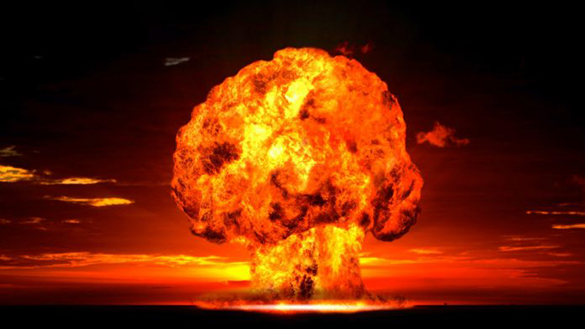 The Ukrainian daily Defense Express reported that Moskva might have had nuclear weapons aboard before the ship's sinking.  Claims of a "Broken arrow event has occurred. "Broken Arrow" refers to a nuclear-related mishap that does not threaten nuclear war.

Moskva, a 40-year-old icon of former strength of the Russian military establishment, was left a smoldering ruin after receiving two direct missile strikes in the assault and subsequently went down while being towed to the Crimean naval port of Sevastopol. Russia emphatically denies Ukraine's claim that the Moskva was assaulted and heavily damaged by two Ukrainian cruise missiles.

The Moskva is not just the heaviest loss since the Argentine cruiser ARA General Belgrano on May 2, 1982, but it is also the largest naval asset lost since World War II.

However, insiders claim there is no serious danger that the vessel has many nuclear weapons in a disturbing disclosure.

Andriy Klymenko, editor-in-chief of BlackSeaNews, has asked for an immediate international investigation into whether the Moskva was transporting nuclear weapons.

"According to friends and analysts, there are two nuclear cruise missile warheads onboard the Moskva," he said.

"Perhaps this is new knowledge for many, but it is accurate" - the battleship is "a nuclear weapons carrier," according to the Navy.

"Can you tell me where these warheads are?" he inquired. What were they doing when the ammo went off in the air? What is the location of the point on the map, and what are the coordinates?"

The sinking Moskva, according to the Ukrainian online journal Defence Express, poses a nuclear-weapons danger to the country.

Their statement said that "there is a genuine chance that nuclear bombs were on board the afflicted flagship of the Russian Black Sea Fleet."

In addition to the P-1000, there are additional options "The nuclear missile cruiser Moskva, armed with Vulkan" missiles, might also be armed with other nuclear weapons."

Amid terrifying allegations of probable nuclear weapons in the Black Sea, a town in Russia's border area with Belarus, home to a military facility, was bombed on Thursday.

The assault came as a result of explosions at an ammunition dump and an oil plant in Belgorod and along a nearby railroad track.

Images from Belgorod taken in the early hours of Friday morning showed anti-aircraft missiles in the sky, indicating that new attacks were taking place.

The ministry said that its troops had also entirely retaken control of the Ilyich Steel Plant in the beleaguered port city of Mariupol, which had previously been under siege.

According to Russian officials on Wednesday, approximately 1,026 troops from Ukraine's 36th Marine Brigade, including 162 officers, surrendered near the steel mill.

According to Ukrainian officials, the city of Mariupol, which Russian soldiers have surrounded for many weeks, has seen the bloodiest combat and the most extensive devastation since Russia started a military incursion in Ukraine on February 24.

According to the most recent information from Ukraine on Friday, the skipper of the Moskva perished as a result of the humiliating missile assault.

"He perished due to an explosion and fire on board the former flagship of the Russian Black Sea Fleet," according to Anton Gerashenko, an adviser to the Ukrainian interior ministry in Kyiv.

"We are not in mourning," the spokesman continued.

Other sources lend credence to the assertion that Capt. Kuprin was slain.

Moscow did not immediately confirm the death of Kuprin, but the country has neglected to report the deaths of numerous key military figures throughout the 51-day battle.

Russia claims that the crew has been evacuated, but there is growing concern about the possibility of lives being lost aboard the warship.

It has been reported that just around 50 of the crew members have been located, having been picked up by a Turkish ship, according to reports.

While another 14 people were airlifted to the port of Sevastopol, the fate of the other 450 people remains a complete mystery.

According to a video taken from inside Sevastopol overnight, several dozens of automobiles ostensibly belonging to sailors are still parked at the port, indicating that their owners have not yet arrived to collect them.

On the 300th anniversary of the Russian navy, a "farewell ceremony" for the Moskva is scheduled to take place in Sevastopol today at a memorial dedicated to the ship.

The incident left Russian despot Vladimir Putin yearning for murderous vengeance, and he struck with a ruthless new bombing campaign almost soon after that.

And he threatened additional attacks on the Ukrainian capital as they sought vengeance for the loss of the giant ship, which weighed 12,490-tonnes.

"The frequency and size of missile strikes on targets in Kyiv will rise in reaction to any terrorist actions or acts of sabotage on Russian territory conducted by the Kyiv nationalist government," the Russian defense ministry warned.

In a late-night tweet on Thursday, she stated: "Right now, there are three explosions in #Kyiv. They came one after the other.

According to footage posted on social media, the sky above Kyiv seems to have been lighted up by a slew of explosions. These look like the most devastating strikes on the Ukrainian capital since Russia withdrew from the city earlier this month.