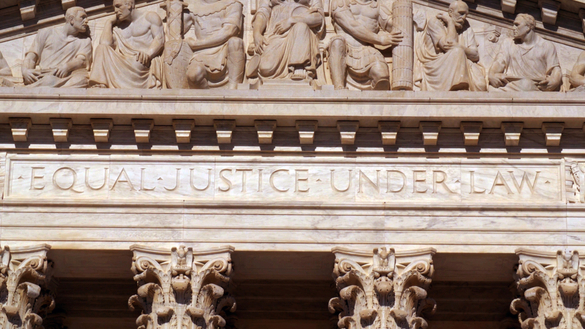 Local, state and federal law enforcement have been seizing billions of dollars in property of property from suspects of crimes – even when there’s no proof of guilt, no trials.

The Supreme Court (SCOTUS) took a huge step to rein in police seizure of property from criminal suspects on Wednesday in a rare unanimous decision. The case before for the court was brought by Tyson Timbs, of Marion, Indiana. Police seized Timbs’ $40,000 Land Rover when they arrested him for selling about $400 worth of heroin.

Supreme Court justice Ruth Bader Ginsburg 85, known by her fans as “Notorious RBG,” wrote the unanimous decision on behalf of the court. Reading a summary of the decision from the bench today noted that (state, local and federal) governments employ fines… “Out of accord with the penal goals of retribution and deterrence” and because fines and seizures are a source of revenue for those governments.

The decision by the Supreme Court makes clear that the U.S. Constitution bans excessive fines and it applies to the state and local governments as well as Federal law enforcement agencies.

The plaintiff in the case decided by SCOTUS, Tyson Timbs pleaded guilty to possession of the heroin and was not faced with any time in prison. His loss of his Land Rover was the most significant consequence even though he was able to prove he bought it with life insurance money he received following his father death.

Despite the unanimous SCOTUS decision Timbs still has to win one more court battle before he gets his Land Rover returned to him, but that is considered by legal observers to be a formality. A state judge hearing Timbs case ruled that taking the car was disproportionate to the severity of the crime, which carries a maximum fine of $10,000. However Indiana’s Supreme Court ruled SCOTUS had never ruled on the Eighth Amendment’s ban on excessive fines applies to rest of the Bill of Rights — and that those protections apply to the states as well as the federal government.

“The decision is an important first step for curtailing the potential for abuse that we see in civil forfeiture nationwide.”

The windfall of billions of dollars from confiscation and seizure by state and federal law enforcement authorities has become a significant part of the funding for these agencies. The practice of civil forfeiture has increased dramatically in recent decades.

“No state shall deprive any person of life, liberty or property without due process of law.”

This same 14th Amendment provision, known as the due process clause, also has been used in cases that established a woman’s right to an abortion and knocked down state laws against interracial marriage and gay sex. The 14th Amendment was passed in the wake of the Civil War to ensure the rights of newly freed slaves.

Justice Clarence Thomas while not dissenting issued a separate opinion that cited a different section of the 14th amendment to achieve the same result. Thomas has long been a critic of the court’s application of the due process clause found in the Fifth Amendment wrote in his decision that cases which employs the provision…

“are some of the court’s most notoriously incorrect decisions,” including the abortion rights landmark case Roe v. Wade and the 1857 Dred Scott case that held that African-Americans were not citizens.

“any law which shall abridge the privileges or immunities of citizens of the United States.”