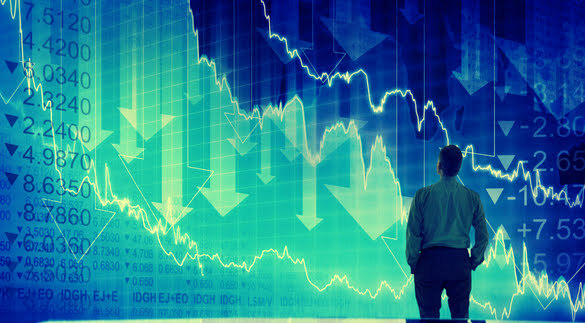 The belief that the Federal Reserve would have to raise interest rates four times this year rather than three times pushed the Dow Jones down 591 points at the outset, putting the NASDAQ on track for its fifth down day. The S&P 500 fell slightly more than 2% after finishing in the red during the first week of trade.

Stocks aren't the only assets suffering a reversal of fortunes. Bitcoin fell below $40,000 for the first time in about four months fell as 10 year Treasury yields climbed, climbed over 1.8%, reaching their highest level since January 2020.

"The surge in rates since early December has crushed the valuation of stocks with high growth and low margins, but a well-ordered progression of Russell 3000 stocks implies further repricing."

"We have previously shown the speed of rate moves matters for equity returns. Equities typically struggle when the 5-day or 1-month change in nominal or real rates is greater than 2 standard deviations. The magnitude of the recent yield qualifies as a 2+ standard deviation event in both cases."

The move higher in Treasury yields and slide in U.S. equities were clear set off by the release of the Federal Reserve's December meeting minutes last week.

The Fed minutes sugged that a growing number of its board members are leaning towards both a quicker start to increase interest rates and interest rate hikes and a more rapid tightening of its balance sheet than most of Wall Street's analysts have been expecting.

The co-founder of DataTrek Research, Nicholas Colas, issued a morning note to his firms' clients warning that the Fed would be monetary. Interest rate policies would be more aggressive than previously thought based on the Central Bank's transcript of its last meeting. Refer to last week's…

"…price action in 10-years was all about what the Fed will do with its balance sheet. We'll know more on Tuesday, with [Federal Reserve Chair Jerome Powell's] renomination hearing set for 10 a.m. One thing we're confident about: equity market volatility is not over yet."

"His confirmation hearing will be a chance for him to further reassure lawmakers and the public that the Fed is focused on reducing inflation in 2022."

"We expect that to feed further market volatility this week."

While Powell's confirmation hearing before the Senate Banking Committee on Tuesday is the big event this week, investors should also keep a sharp eye on the new inflation report (the December Consumer Price Index (CPI), that will be released on Wednesday by the Bureau of Labor Statistics.

The CPI is expected to show a 7% year-over-year jump in prices — or the biggest rise in inflation since 1982.

On the earnings front, a number of big banks, including JPMorgan Chase (JPM), Citigroup (C), and Wells Fargo (WFC), are each expected to report Friday morning before the opening bell.

Geoff Garbacz, the Chief Strategist of SuperStockInvestor.com, reports that the market is "way oversold," but technology stocks are the worst hit….

"We could be approaching a tremendous buying opportunity in technology companies as investors, professional money managers and speculators adjust to the idea that the low-interest record rates and loose monetary policy come to an end."

"Keep in mind even with four interest rate hikes by the Federal Reserve, interest rates remain, at near historic lows, and there are still trillions of dollars on new wealth in the market."

The Fed has an inflation problem and will have to react, says Mohamed El-Erian