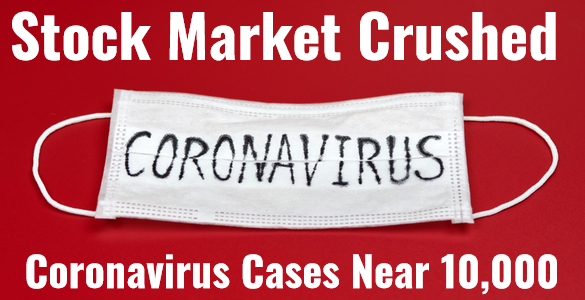 The spread of the Coronavirus is escalating despite comforting re-assurances yesterday by the World Health Organization (WHO) that China has done a remarkable job of containing the potentially deadly virus. The number of reported cases rose overnight from 7,800 to near 10,000. Some estimates by scientists are projecting over 190,000 cases by mid-February.

The escalating spread of the Coronavirus rattled global markets for another session, sending risk assets tumbling as investors assessed the current and future damage from the virus.

The nosedive of over 600 points in the Dow Jones comes as both the number of cases reported are jumping and hints that the United States weighs even tighter China travel restrictions because of the Coronavirus outbreak.

Many airlines have already sharply curtailed or suspended flights to the world’s second-largest economy — which now is reporting a death toll of over 200.

The world’s financial markets are starting to panic over the escalating spread of the virus and global markets have suffered the worse sell-off today since the Coronavirus was discovered in December. Risk assets tumbling as investors assessed the current and future damage from the virus. The volatility index in the United States rose more than 20% to 19.37 from yesterday’s close $15.49.

The selloff of the S&P 500 has poised the key index to turn negative for the year if this selloff of hold and continues.

The S&P 500 was on track to close in negative territory on the year during Friday’s session. Each of the three major indices was off more than 1% as rising Coronavirus fears triggered a sell-off in risk assets.

While not as deadly as the SARS outbreak, the Coronavirus has, at this point, outpaced the 2002-2003 spread of SARS. World Health Organization officials say 99% of the cases are contained to mainland China, but new cases have popped up around the world — including in the United Kingdom, which on Friday reported its first confirmed cases. The danger and fear are being magnified by reports that the infection can spread fast from person to person and is infectious even during its incubation.

We at Wall Street Rebel have predicted that the U.S. major stock indexes are vulnerable for as much as a 10% correction, with a 15% overcorrection not out of the realm of possibility. Any sign that the Coronavirus is spreading rapidly over the weekend in and out of China could send the Dow Jones and S&P index into a 500 to 1,000 points dive on Monday. Professional traders, savvy investors and even U.S. politicians recognize the danger.

The economic spillover in an uncertain global growth environment is unnerving everyone involved in the financial markets investors. Goldman Sachs estimated on today the virus would cut China’s growth by a 1/4 of a percentage point this year, with a commensurate drag on annualized U.S. first-quarter growth. That estimate may prove to be dramatically low if, as we suspect at Wall Street Rebel, the number of those infected soars to over 20,000 next week and leaps to over 80,000 within the next two weeks and could reach 190,00 later this month.

Goldman Sachs estimates of the economic damage to the Chinese, U.S. growth may need to be adjusted more than once in the weeks ahead. Meanwhile, Wall Street Rebel recommends being as defensive as possible until the effects of the Coronavirus become much clearer. Our sister publication World Opportunity Investor has hedged most of its long recommendations with covered call options and went short with a key volatility index ETN that will rise sharply if the VIX index climbs to 25 or higher. A genuine panic could send the VIX from its current $18+ to 35 or even 45 assuming the victims of the virus hits 80,000 cases in the next two weeks - and 190,000 by the end of the month. Be careful out there.