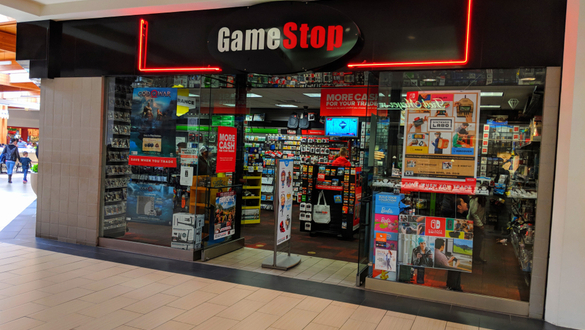 The Dow Jones wobbled its way down 620 points, or 2.03%. The Dow closed yesterday up 1% or 300 points. All the major indexes, including the Dow, S&P 500, and NASDAQ, posted weekly losses. GamesStop meteoric rise is somewhere around 8,000 percent over six months.

Shares of some of the heavily shorted stocks that had become popular picks among members of Reddit’s r/wallstreetbets forum surged anew after sliding on Thursday as a result of online brokerage firms stopping investors from buying those stocks.

GameStop (GME) shares rocketed after falling almost 50% on Thursday are now back up over 60% today. GME closed trading today at $325 a share up over $131.

Gamestop's stocks surged once again after the stock-trading app Robinhood reversed its decision and allowed limited trading to resume.

Shares of AMC (AMC) also climbed much higher on Friday after sliding on Thursday. This turnaround from being down on Thursday and up on Friday was experienced by BlackBerry (BB), Express (EXPR), Bed Bath & Beyond (BBBY), and Nokia (NOK).

The frenzy in trading in these and other heavily shorted names has generated historical trading volumes in equity markets. The volume of trades has surpassed the volume of trades taking place at the pandemic’s most volatile points in March of 2020.

According to Bloomberg data, a whopping 23.6+ billion shares of U.S stocks were traded on Wednesday,  marking the most trading volume in more than a decade.

“closely monitoring and evaluating the extreme price volatility of certain stocks’ trading prices over the past several days,”

Yesterday, online brokerages including Robinhood, Webull Financial, and E-Trade Financial took the unprecedented step of blocking the purchase of many of these volatile shares, drawing users’ ire, criticism from lawmakers, and a class-action lawsuit against Robinhood for the “out of the blue” trading restrictions.

There was some good news, recent reports on U.S. economic activity came in better than expected, and hopefully, this will point to a tentative improvement in the economic landscape. Weekly jobless claims dipped below 900,000 for the first time in three weeks, albeit while remaining at a historically high level. Today, new data indicated that personal income rose more than expected in December;  apparently, consumer spending ticked down less than feared.

“I think what we’re looking at is, we’ve got pockets around the market that are decidedly showing signs of bubble-ness so to speak, whether that comes from what we saw [Wednesday], which was really a side-show of the markets, related to these shorted stocks that were driven up higher by individual investors,”

“The other side of it would be on a fundamental basis, what we are seeing is an economy that is positioning itself for a recovery process. And that means your core equities are likely to have an opportunity to move higher.”

“The valuation might be stretched in terms of a more conventional period, but right now with the Fed essentially magnanimously providing liquidity and fiscal policy coming to the rescue at least one more time to help small businesses and individuals, we would say that valuations are probably reflecting the current environment, and a need for investors who have intermediate to long term goals to invest in stories that are fundamentally sound.”