Stock Market on Verge of Greatest Flood of Money in History? 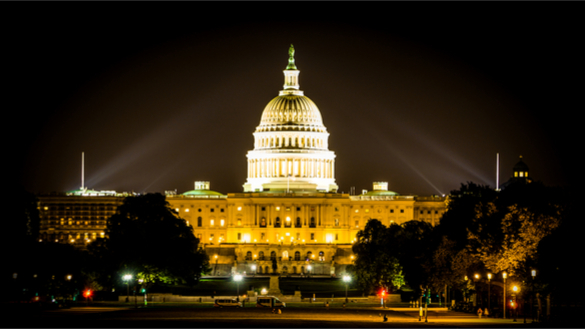 President Biden's $1.9 trillion and $2.25 trillion infrastructure bills could encourage the biggest inflow of capital into the U.S. equities markets in history.

Dan Runkevicius, Editor of Meanwhile in Markets, writes in his latest Forbes column …

"Biden is on fire. After the $1.9 trillion stimulus bill blitz, he's set his sights on rebuilding "crumbling" America. His plan is to splash out a massive $2.25 trillion to fix America's rundown infrastructure, "green up" the economy, and invest in next-gen technologies."

Biden's announcement of the $2.5 trillion infrastructure proposal included the assertion that this jobs bill would also build an infrastructure that would be seen in 50 years…

"It is a once-in-a-generation investment in America, unlike anything we've seen or done since we built the interstate highway system and the space race decades ago."

This bill will be the most significant infrastructure build-out in U.S. history exceeding the New Deal (the set of programs meant to pull America out of the Great Depression in the 1930s) and post-World War II economic explosion. President Biden's proposed infrastructure plan could have an enormous impact on the U.S. stock market.

Runkevicius makes his case for a massive inflow into the U.S. equity markets by first breaking down what's in Biden's ambitious "American Jobs Plan".

Pointing to four areas the plan focuses on:

Her's a breakdown of the plan by proposed budget: 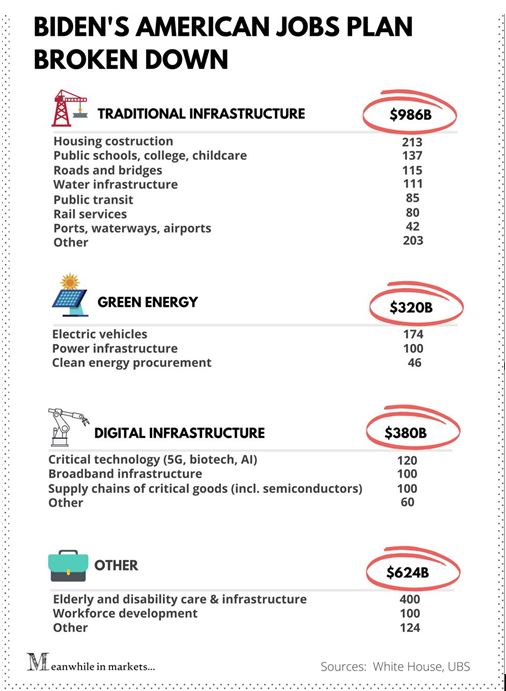 "While green investments are the future, they may not be the best way to bet on Uncle Sam's historic spending spree."

He goes on to point out that

"The stock market does not reflect the present. It's a function of all the fears, hopes, and beliefs of what will happen in the future. And most of what could happen is "baked" into stock prices way before it happens."

"In fact, sometimes investors bid up stocks ahead of time so much that when things do happen, the stocks barely budge—or go in the opposite direction. That's even truer with highly scrutinized political agendas."

"In other words, picking the best investments to play Biden's spending spree is not just about sorting out the stocks that Uncle Sam will shower with the most money. It's also about finding those that haven't been hyped up in advance."

Runkevicius points out in his Forbes column a UBS chart that plots the valuations of stocks tied to Biden's three spending themes since 2015: 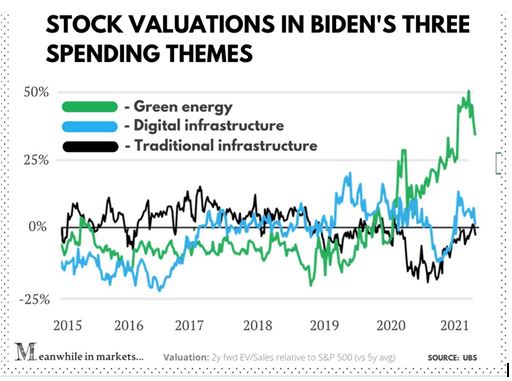 Valuations of stocks tied to Biden's spending themes. He argues that…

"Green energy stocks are selling ~30% above their historical average. And while stocks tied to traditional and digital infrastructure have had a great run since the election (obviously in anticipation of this bill), they are still in line with historical norms."

Then Runkevicius argues that there are two approaches to investing, assuming Biden can push through most of his proposal by the July 4th Congressional break.

"The first option is to go abroad and invest in an ETF tied to Biden's agenda. The broadest such ETF would be iShares U.S. Infrastructure ETF (IFRA). It holds a basket of 155 stocks that benefit from infrastructure spending."

"You could also look into ETFs that track sector that would play a part in the build-out. Good examples would be the sectors of basic materials (stuff like cement that goes into construction) and industrials (earth-moving machines and all that)."

"Or if you are more into digital, you may consider the semiconductor sector, which has become a matter of national security. The largest ETF tracking U.S. stocks in this industry is iShares PHLX Semiconductor ETF (SOXX) SOXX +0.8%."

If these ETFs don't appeal, Runkevicius suggests picking out your own stocks and suggesting these parameters for your research.

"First, look at how much of the company's revenue comes from the areas Biden's plan is targeting. He suggests using  Keith Parker UBS's lead U.S. equity strategist approach by focusing on what revenue sources look for stocks that you consider and to begin with a focus in these four areas:

Broadband and digital: We identify companies which have revenue exposure to the theme such as communication infrastructure and network equipment, infrastructure software and semiconductors."

The Runkevicius suggests focusing on…

"how much revenue the company is earning from government contracts. If the company gets a great deal of orders from Uncle Sam, an explosion in its spending will have a more immediate and direct impact on the company."

"weigh the stock's valuation against its long-term average and valuation before the election. That's because the higher the valuation, the more likely the news is "baked" into the stock price. Or put another way, there's less upside left for you."

Runkevicius insists that Bidenomics will be in full swing if, like his $1.9 trillion stimuli, his "American Jobs Plan" is passed and they are "a sign of a U-turn in America's policy" because they are gigantic spending bills.

He makes the case by quoting Robert Reich, a former U.S. secretary of labor who served under President Clinton

"Bidenomics is… give cash to the bottom two-thirds and their purchasing power will drive growth for everyone."

"Will have an effect on stocks for years to come, and it's already shifting the order of winners and losers in the markets. In other words, what worked under Trump is not going to work under Biden."

"Now, the big question is how many of his whims can Biden pass through Congress. A thin Democratic majority is in his favor. But not all Democrats are crazy about Biden's grand plans."

Several polls were taken and reported mirror one conducted by Data for Progress and Invest in America and released Thursday, April 8, 2021.

The Progress and Invest in America poll also showed that more than 60% of voters support every potential provision of the proposed American Jobs Plan, including investments in physical infrastructure, clean energy, manufacturing, housing, and the care economy. 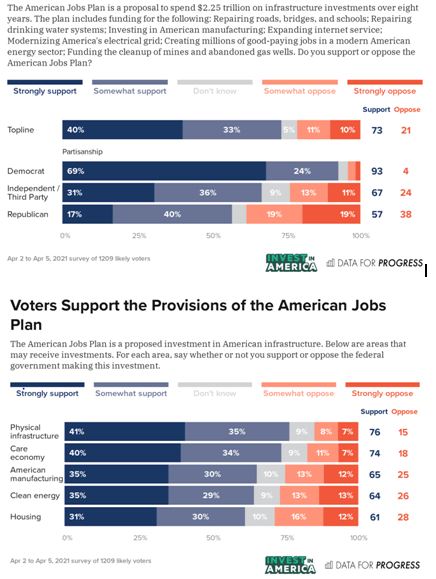 With polling numbers like this, the one key vote in the U.S. Senate Senator Joe Manchin of West Virginia will be hard-pressed by the Republican Governor Jim Justice of his home state for several big infrastructure projects. This is reflected in the other Republican Senator Shelley Wellons Moore Capito's comments, who has made it clear she's willing to negotiate with the Biden Administration to bring as much money and jobs as possible back home to West Virginia.

This kind of popularity for a big-spending program and President Biden's proposed hike in corporate taxes is a sharp reversal from Reaganism, built on the concept that …

"Big government is the problem, not the solution."

That dominated Republican politics from 1977 through 2016 when Trumpism believed that autocratic klepto-capitalism imposed by an all-knowing strong man is a better guiding principle than a truly democratic republic.

Senate Republican Minority Leader Mitch McConnell and most of his caucus appear to be unhindered by the sky high public sentiment to Biden's American Jobs Plan. If they are successful in blocking it, Dan Runkevicius's forecast may turn out to be a double edge sword. In other words, if Biden's American Jobs Plan was blocked from becoming law, the U.S. Stock Market could see a nose-dive instead of a boom.