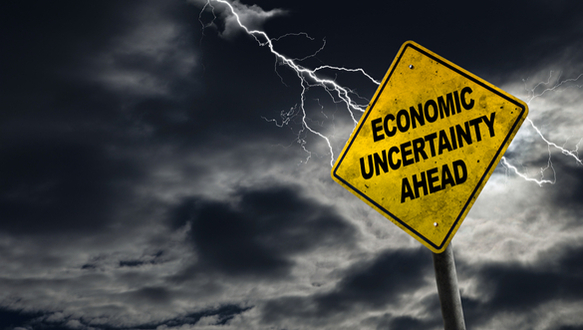 “Every injection of stimulus weakens the response of the following dose.” — Charles Hugh Smith


One of the broader challenges you face as an investor is trying to intuit inflection points in the market’s reaction to bad news.

Traditionally in America, investment was much easier than it became in the last quarter of the 20th century. Before about 1973, good news on the economy was, well, good news. And bad economic news was bad news. Then something fundamental changed. I analyzed this in chapters 16 and 17 of my most recent book — The Breaking Point.

In “The Hidden BTU Content of Fiat Money,” and “The Great Slowdown,” I explored the crucial importance of energy inputs in driving economic growth. The great slowdown in growth, as well as the stagnation of real income among middle-class earners in the US and other advanced economies, had its origin in declining Energy Returns on Energy Investment (EROEI) or (EROI) for short.

This led to a profound shift in the business model of Western civilization — from one based on savings and investment to what I have termed “debtism” — a model based on heretofore unprecedented bouts of borrowing leveraged on equally unprecedented increases in paper wealth. In effect, a new version of Keynesianism came to the fore, stimulating demand on the back of stock and real estate prices inflated by large emissions of credit by the Federal Reserve. In effect, the Fed has been monetizing collateral — stock and housing prices.

This hints at why bad news became good news for stock investors. I remember that already in the late ‘80s smart investors I knew on Wall Street would buy stocks aggressively on any hint that the Fed was expanding credit.

While Fed Chairman Greenspan was notoriously opaque in his discussions of monetary policy, his successor, Ben Bernanke, was more forthright in proclaiming the virtues of what he embraced as “The Great Moderation.” He cited “improved performance of macroeconomic policies, particularly monetary policy” as explaining a decline in the variability of quarterly growth in real output since the 1980s.

Bernanke believed (what many investors have come to suspect) that ever-larger credit expansions could keep the economy stable, and ramp consumer demand even when consumers appeared to be tapped out. Thus, traders began to respond to transparently flimsy statistical frauds claiming historically low unemployment and record job growth in the assurance that the authorities would respond to truly troubling evidence of weakness, particularly plunging asset prices with another bout of wholesale money creation.

In this respect, current Fed Chairman Powell’s statements hinting at an “about-face” on the policy of Quantitative Tightening (QT) inspired a stock market rally through January and the first weeks of February this year.

Of course, the unspoken assumption behind the stock buying is that continued credit expansion will continue to stimulate. Will it?

As time has gone on, governments have secured progressively less additional growth of GDP for any given increase in credit. In 1950, the economy was bigger than credit. The ratio of total credit to GDP was just 55%. By 1971, the ratio of total credit to GDP had ballooned to 150%. Now it has more than doubled again to 354%. In other words, credit has been growing much more rapidly than the economy, especially over the past half-century since Richard Nixon repudiated the gold reserve system.

Evidence that ever greater doses of credit expansion have been required to generate a dollar of additional GDP sets the stage for another but of cross-dressing between “good news” and “bad news.” One of these fine days, bad news will be bad news again, all the more so, as the system will have exhausted its expedients for ramping the tired economy in the face of plunging returns on EROEI.

What makes it particularly challenging to guess when the dead-end of debt saturation has been reached is the fact that there is no pat linear relationship between credit stimulus and GDP growth. The amount of new debt it has required to generate a dollar of GDP growth has fluctuated erratically in recent years. The range has spread between $4 to as high as $10 in debt for one dollar of growth in some reporting periods. For example, in Q1, 2016, nominal GDP was $18.23 trillion, an increase of $65 billion over the previous quarter, for an annualized growth rate of 0.07%. Meanwhile, according to the Federal Reserve, total US debt in Q1 2016 grew by $644.9 billion — or roughly $10 of new debt to generate each dollar of GDP growth.

Seen another way, the Fed’s policy of suppressing interest rates to sub-normal levels reflects a perception that debt saturation was on the horizon when the economy was paying $400 billion in interest back in the 1990’s at a time that interest rates averaged about 7%. By pushing rates down towards zero, the Fed essentially permitted greater credit expansion while keeping the total interest payments in the vicinity of $400 billion annually.

More recently, interest payments have soared above $550 billion, as we approach dangerously close to the previous high in debt to GDP ratio which peaked at roughly 380% on the eve of the last financial crisis a decade ago.

Another red flag warning of deteriorating stimulus effect from increases in credit is the inversion of the yield curve— as analyzed in the February issue of Strategic Investment.

Bear in mind that you have to watch both the denominator and the numerator in monitoring the approach to debt saturation. Debt can soar as a percentage of GDP past the saturation point where the system falls apart, not only because of increased debt but because GDP falls.

This is what happened in 1929 — the last time the economy faced the lethal addition of trade protectionism (Smooth-Hawley Act) at the top of the credit cycle. Widespread debt liquidation led to drastic declines in nominal economic activity, leading to severe deflation in some areas of the economy. An index of raw material prices fell by about 50% between September 1929 and Spring 1933. Semi-manufactured products lost 40% and finished goods 30%. Farm prices were especially hard hit, with farm products plunging by 60%. while wholesale food prices declined by over 45%.

Today Trump tariffs seem to seem to alarm the stock market even less than Smoot Hawley troubled investors in 1929. Complacent markets continued to march higher for five months after the House of Representatives passed a version of Smoot Hawley May 28, on a vote of 264 to 147. Part of the reason for optimism was the fact that on June 19, 1929, Republicans on the Senate Finance Committee met to re-write the bill. (Shades of Trump’s Trade talks with China).

Yes, the great 1929 Crash was eventually precipitated after the Senate rejected a move to limit the tariff increases by a vote of 64-10 on October 21, 1929. Then, on October 23,16 members of the anti-tariff coalition switched sides and voted to double tariffs on Canadian calcium carbide, used in steelmaking. The crash began the next morning on October 24, culminating on Black Tuesday, October 29, 1929.

The conditions are in place for an even more devastating loss of wealth and a more profound depression in the credit cycle unwind than in 1929. We continue to monitor this for you in Strategic Investment. Subscribe if you haven’t already. And stay tuned.