Steve Bannon Turns on Mike Lindell: He Has No Evidence! 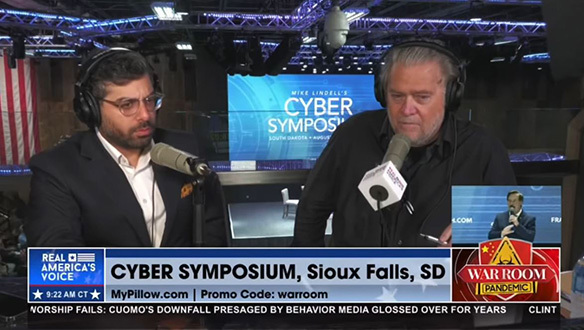 After spending a reasonable amount of time pushing Trump's "big lie" that the 2020 election was stolen, Steve Bannon went on his show Real America's Voice (also called The War Room) and did a 180-degree turn. Bannon insisted that the MyPillow CEO had not provided his followers with "receipts" proving the election was fraudulent after the first day of Lindell's much-hyped cyber symposium. Bannon admitted Real America's Voice co-host Raheem Kassam …

"Yesterday was kind of a good way to set the stage, a lot of interesting analysis, but we understand people want to see what's going on."

Kassam suggested that viewers of Bannon's program had become impatient and were using "colorful language" to express their desire for election fraud evidence. Kassam went on to say…

"This is a very engaged audience, and we understand people are engaged. People have said, 'Hey, Mike's been out there for a long time doing this, and it's time now to get to the details."

"I would have done it differently; Mike is his own guy. I understand. It's his show. I would have come out and overwhelmed immediately with packet captures and data and show, hey, here's what I got, pull the camera back and then frame it and then continue on."

The conservative broadcaster Bannon also complained about Lindell for repeatedly airing the same 15-minute propaganda movie about the election over and over. Admitting it's a propaganda video is a major swipe at the entire cyber symposium…

"I think this is a mistake. "I don't think they should play this movie again. I want to be brutally frank."

"You've laid a theory of the case out here that's very powerful, but in laying that case out, you've got to bring the receipts."

Bannon is substituting the word "receipts" for the accurate word needed to describe the lack of "evidence."

Bannon made no mention of Mike Lindell's urging the world to tune into his cyber symposium at 7 PM Central Time for earth-shattering evidence that proves that the election was stolen. Bannon's ignoring that promise was likely a result that it turned out to be more bullshit that could never be described in a court of law as genuine evidence.

Bannon may be hedging his "big lie" narrative after filing a $1.7 Billion lawsuit against TV Networks Newsmax and OAN by Dominion Voting systems. He may not want to be added to the list of defendants for lending his voice to the "big lie," which alleges that votes were changed by Chinese hackers of Dominion's voting machines.

Another issue that has risen this morning may be concerned about is Home Land Security's warning that there's violent rhetoric on social media and other indications that some people buying into the "big lie" may resort to violence. The last thing Bannon, who President Trump pardoned for a scam that defrauded the former president's supporters for building a wall on the southern border; most of the millions raised went into his and his organizing partner's pockets.

It would seem by the lack of any credible evidence that Lindell's own flip flop repeatedly insisting that former President Trump would be reinstated on the morning of August 13, 2021, repeatedly is now - not going to happen. Even more, confounding Lindell as he was preparing to host his cyber symposium, which was expressly set up to prove that the November election was stolen denied on Tuesday to a Vice News reporter…

Lindell is on video repeatedly insisting that Biden would resign from the presidency on the morning of August 13, 2021.

Vice News has reported that…

"Lindell's Cyber Symposium has been widely hyped in right-wing and extremist circles as the moment of reckoning for those who dismiss election fraud conspiracies."

Lindell's backtracking on his claims is likely to be a significant disappointment to QAnon followers and die-hard Trump sycophants, who adopted Lindell's Trump reinstatement theory and are hearing from Bannon and others. That the cyber symposium that he has no proof and Lindell's claim that…

"dozens of 'cyber guys' to verify his claims the election data he has in his possession doesn't reveal fraud in all 50 states."…

…. amounts to nothing but more horse shit.

All Lindell, to this point, has proven is the claims being made by Dominion Voting Systems in their lawsuits against him and his fellow defendants are 100% on point. His offer of $5 million to anyone proving his evidence isn't legitimate should be awarded to CNN's Drew Griffin. He calmly explained the results of his investigation of the evidence last week…

"We gave the evidence to an expert to examine, and he said what you gave us isn't evidence of anything. It was just routine meta-data."

Griffin has shown the evidence to 9 experts, all holding Ph.D. degrees, and traveled to voting counties to ask election officials if Lindell's evidence was, in fact, evidence of election fraud. In every case, Griffin was told by Republican election officials – there was no fraud.

While Lindell is not likely to pay the $5 million, he should be distraught the lawsuits filed against him may end with him being forced to file for bankruptcy. Such is the turbulent life of this former crack addict. One can only wonder if he's back on the crack pipe and, as a result, delusional.