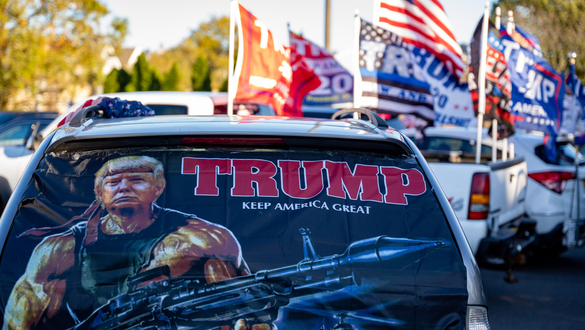 Steve Bannon, one of Donald Trump's former campaign and White House advisors who Trump would later preemptively pardoned of federal crimes resulting from the border wall scam, was well aware of the pending insurrection. Bannon broadcasted before the January 6 insurrection an illuminating awareness that warlike conditions were to occur in Washington DC. 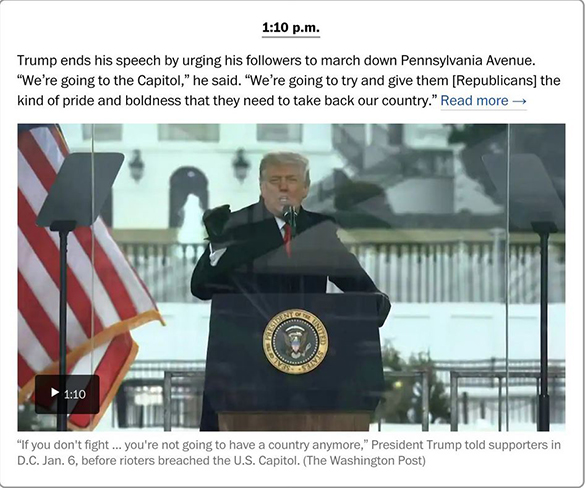 On the January 5th internet broadcast of his TV program Real America's Voice, Steve Bannon warned that the January 6 "rally" would be "hell."

Laurence Tribe claims that if Bannon knew that it was going to be a "war" and "all hell is going to break loose," then-President Donald Trump also knew what was going to happen." Bannon said on his January 5 show…

"All hell is going to break loose tomorrow."

"Just understand this: all hell is going to break loose tomorrow. It's going to be moving. It's gonna be quick."

Bannon's warning about all hell breaking loose came in response to Sen. Chuck Grassley's (R-IA) comment that Vice President Mike Pence would preside over the election certification. This was to dispel the rumor circulating earlier in the day that Sen. Grassley would be the one to do it and that Pence would not be there. 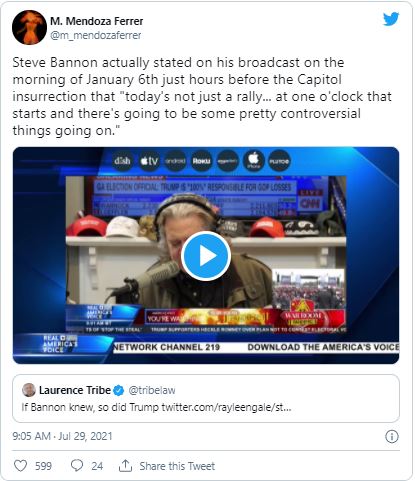 M. Mendoza Ferrer on Twitter: "Steve Bannon stated on his broadcast on the morning of January 6 just hours before the Capitol insurrection that "today's not just a rally... at one o'clock that starts and there's going to be some pretty controversial things going on."

Bannon added in retrospect sounded as if he knew violence by Trump's supporters was going to erupt. Bannon was saying…

"It's the fog of war. Keep the focus on what's important."

Then just before the rally, Steve Bannon warned on his show that he knew precisely when…

"Some pretty controversial would" begin happening.

"Today's not just a rally... at one o'clock that starts, and there's going to be some pretty controversial things going on." 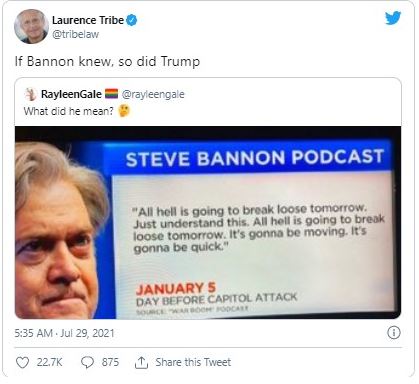 Bannon's comments on January 5th and 6th raise the serious question: What did former President Trump know, and when did he know it?

In Michael Bender's book "Frankly, We Did Win This Election," Michael Bender recalls a conversation Trump had with aides about whether they thought there would be violence before the rally.  The book claims…

"[Trump] asked if they thought the day would be peaceful."

"Everyone who comes to your rallies is peaceful."

"Your supporters love law enforcement. Unless they interact with protesters, I wouldn't suspect any problems with our folks."

'Don't forget these people are fired up.'"

In debuting the number one book on The New York Times Bestsellers list Carol Leonnig and Phil Rucker's the co-authors of the book "I Alone Can Fix It," also suggested that the Trump administration was aware of the possibility of impending violence…

"A Homeland Security operations chief said his agency had picked up the chatter of some folks traveling to Washington with intent to do violence but concluded the overall threat from these protests wasn't significant."

As early as December 30, the Washington Post was warning of the plans being made for the event. According to the Post…

"Threats of violence, ploys to smuggle guns into the District, and calls to set up an 'armed encampment' on the Mall have proliferated in online chats about the January 6 day of protest. The Proud Boys, members of armed right-wing groups, conspiracy theorists, and white supremacists have pledged to attend."

The House Select Committee investigated the January 6, 2021 insurrection, and investigators from the US Department of Justice are no doubt going to subpoena and exhaustively depose Steve Bannon, Judd Deere, Jim Jordon, Mark Meadows, Rudy Guiliani, Mo Brooks, Donald J. Trump Junior, Ivanka Trump, President Trump, and many others; along with a deep dive into their phone records, text messaged and emails.

Anyone involved in standing down the security in the Capital on January 6, 2021, or colluded, conspired, and or cooperated with the disgraced twice impeached former president, and Trump himself could be charged with sedition and inciting an insurrection. Being charged and convicted of these sorts of crimes could face jail sentences of 20 or more years, including a life sentence.